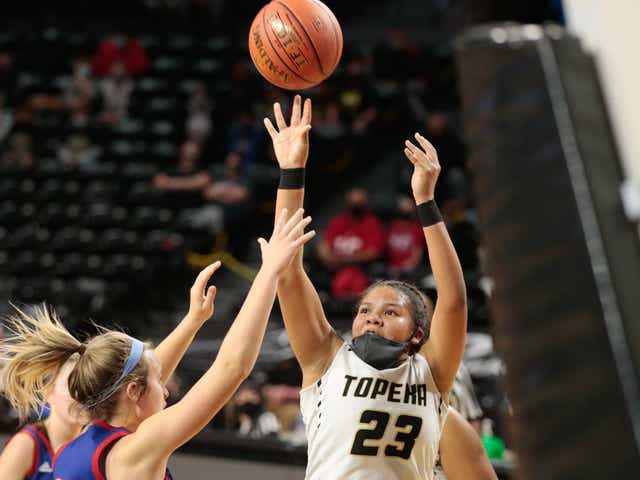 Well in Friday’s Class 6A state tournament semifinal, Canady couldn’t help but be a little selfish. And quite frankly, Topeka High’s season continues for another day because she was.

With three starting guards relegated to the bench in foul trouble — seniors Lilly Smith and Ja’Neysha Hendricks and sophomore Kiki Smith each picking up three in the first half — Canady hoisted the Trojans on her broad shoulders and carried them past a gritty Dodge City team and into Saturday’s 6 p.m. state championship game.

The junior post scored 29 points and grabbed 14 rebounds, powering High to a 54-37 victory.

With the win, High improved to 23-1 and returned to the Class 6A state championship game for the second time in three years, denied last year when the state tournament was canceled for COVID-19 precautions. Awaiting in the title game is undefeated Shawnee Mission Northwest (22-0), which handled Olathe West 59-45 in a game that was a 30-point contest in the fourth quarter.

While that challenge will be a great one, particularly for Canady with the Cougars led by 6-foot-2 post Kennedy Taylor, getting back sure was a great feeling.

“It feels great, but at the end of the day we didn’t come down here to get second place,” Canady said. “We came here to win it.”

High was seemingly well on its way back to the championship game as Canady bounced back from an 0-of-3 start from the field to hit seven straight shots in the first and second quarter, including three straight early in the second quarter keying a 12-0 run that produced a 25-8 lead just two minutes in.

After running Olathe North off the Koch Arena floor in last year’s state quarterfinals, Dodge City sure seemed headed for the same fate.

But High already had Lilly Smith on the bench with three fouls and Hendricks and Kiki Smith followed shortly thereafter and without its guard leaders on the floor, the Trojans hit a funk.

Dodge City took full advantage of the lull, closing the half on a 14-3 run to pull within 28-22 at halftime.

“We had a good start and then they went on a run,” Dodge City coach Kelley Snodgrass said. “I didn’t know how our girls would respond, but they flew around and left it all on the court and made a run of our own.”

Even when High’s guard trio returned in the second half, High’s rhythm didn’t. Instead of working to feed Canady, who was scoring at will inside, the Trojans began rushing shots and getting out of the flow that had produced impressive postseason victories over Washburn Rural and Wichita Heights to get to Wichita.

“Our shots weren’t there whether we were just flustered or what,” High coach Hannah Alexander said. “We’d gotten away from doing that the past few games. The last few games we’ve been great at being patient and tonight we were ramped up and I don’t know if it was the foul situation got them out of whack or what.”

Hendricks buried a big 3-pointer to stem one Dodge City charge, but the Red Demons came right back with a Lauren Gleason bucket. She and Alisia Solis combined for eight straight points with Solis’ short jumper with 1:03 left in the quarter pulling Dodge City within two.

In a bit of a danger zone, Canady — who else? — delivered arguably the biggest shot of the night. After pounding away against the overmatched Red Demons inside, the six-foot junior stepped out and knocked down a huge 3-pointer to restore a five-point High lead at the end of the quarter.

She then opened the fourth with three baskets inside over a six-possession stretch that pushed High’s lead back to 11 points, capping a night where she went 12 of 18 from the floor for her 29 points.

“A lot of film I’ve watched, everybody has a big they can put behind her, but we really don’t have that,” Snodgrass said. “She’s too much of a force inside and we tried to double her, but she was tough.”

Dodge City got only as close as eight the rest of the way and Tae Thomas finished off the Red Demons with a 6-of-6 effort at the free throw line in the last 2:44.

“I’m pretty confident,” Thomas said of her free throws. “I always make sure to make 10 in a row before I leave practice and I knew my team needed it. It was just take a deep breath and make sure I put them in.”

Thomas finished with nine points, going 7 of 8 at the line overall, while Kiki Smith had seven, all coming in the Trojans’ 25-8 opening burst.

Dodge City got nine points apiece from Becca Unruh and Camree Johnson, but the Red Demons went just 1 of 14 from 3-point range and 13 of 42 overall.

The loss ended the best season in school history as the Red Demons went 21-2 against a loaded schedule that saw them play 11 ranked teams. Dodge City went undefeated in Western Athletic Conference play and its only other loss came to McPherson, which will play for the Class 4A state title on Saturday.

“I couldn’t be more proud of this group,” Snodgrass said. “They had high goals this group of four seniors who have been here throughout. They said when we lost last year, ‘We’re winning state this year.’ That’s what their goal was. … We were battled-tested and every time the girls persevered and got it done. We just came up short tonight.”

High will look to capture the program’s first state title since 1982. The Trojans were runner-up in 2019 to Centennial League rival Washburn Rural before last year’s premature ending to an undefeated season.

The will to get back into this position showed up when Dodge City put the heat on.

“We’ve been here before,” Alexander said. “Nothing to take away from Dodge and what they’ve done because they were tremendous. They play so hard. But this is our third year, we want this and we believe we can do this. We have such great leaders and it didn’t matter what the situation was I knew we could trust them. We just have a great group.”

Jake’s RC Pro AM racing, a fun sport for all ages