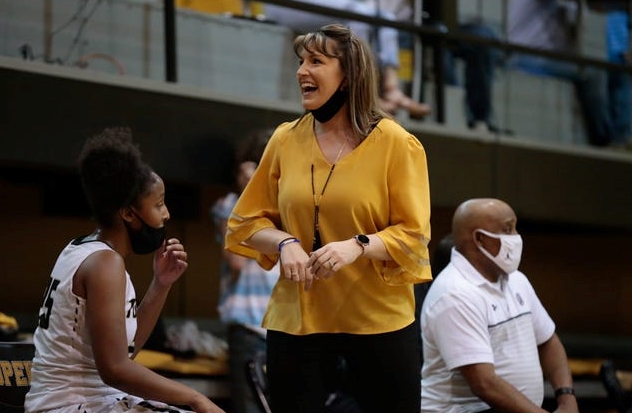 TOPEKA, KS – A new history is written when the Topeka High’s girls’ basketball team achieves great success, while coached by a woman.

“I noticed that being a thing,” Hannah Alexander, Topeka High’s girls’ basketball coach, said. “There wasn’t too many females coaching sports, whether it be volleyball or basketball.”

The Topeka High Trojans appear No. 4 in the state for 6A girls basketball.

“We grew up playing together,” senior Tae Thomas said. “We all are really familiar with each other, so it’s just like playing basketball with my best friends.”

The team is connected with the head coach on a deep and meaningful level.

“Like our best friend,” senior Jada Fulton said. “We love to spend time with her, and we really bond with our coaches as much as we bond with our teammates, which is really helpful because then when it’s time to get strict on the court, we know that it’s all out of love.”

Only three of the top 10 6A teams in Kansas are coached by women.

“It’s hard for women to be in sports,” Alexander said. “You’ve got your family, your home life, you’re having kids, and then you’re also juggling being here and being present with the kids here. It’s very hard, but I think it’s really important. It’s all about building relationships and connecting with those kids.”

Hannah Alexander’s team says that her strength is communication on any level.

“I think how much she communicates with us on and off the court is what makes us really successful,” Thomas said. “She’s very different in that aspect. I feel like she relates to us more, as women, knowing how we can be sometimes.”

A lot of the girls were surprised when they first saw Hannah as their coach, but got used to it quickly.

“When I got into high school, it was kind of like a shock,” Fulton said. “I was like, ‘Wait, she’s the head coach?’ And they were like ‘Yeah,’ so I was like ‘I’ve always had men coaches up until now.’ So, it was really weird at first, but once I got into it, I loved it.”

The team undefeated this season and is working off of three-straight Centennial league championships, three-straight trips to the state semifinals and two state runner-up finishes.

“I’ve been here 8 years with pretty much the same crew, so it’s something that we’ve built in a very strong program,” Alexander said.

The strong bond and support only fuels the team to push harder.

“Just continuing to always fight for my kids,” she said.