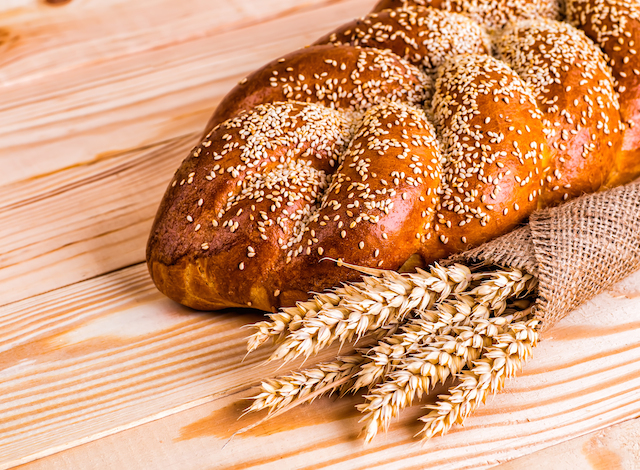 TOPEKA, Kan. – Topekan Hannah Schifman had just finished graduate school in 2020 and, like for many others, finding a job was proving to be difficult for her. So while at a standstill in the job hunt, she decided to tap into her Jewish roots and start a business that would reconnect her with the Jewish community in Topeka.

In October 2020, Schifman started Challah by Hannah, a business that she runs out of her home. Challah is a bread special to the Jewish cuisine and typically, but not always, eaten during special occasions, such as holidays and Shabbat.

“I kind of used this as an opportunity to reconnect the community as well as offering a service for our older community members,” Schifman said. “But of course now it has expanded to non-Jewish community members and sharing more about the Jewish heritage with people.”

Schifman’s challah, which she bakes into a four-stranded braid design, comes in a variety of flavors, including zatar, garlic, original, everything but the bagel, cinnamon sugar and chocolate. Prices range from $5-$14.

Each month, Schifman donates a portion of the challah sales to a local organization. During the month of February, Challah by Hannah will donate to Harvesters Food Network.

Schifman can also prepare a custom challah for those interested. Orders should be placed by 7 p.m. Wednesday so deliveries can be made Friday.

While Schifman grew up with challah frequently at the dinner table, she personally didn’t make any until she was attending college at the University of Kansas.

“There was a summer program I was a part of and we had a cultural festival with international students,” Schifman said. “We would make a dish that represented our heritage or familial backgrounds and that was the first year I made challah. That was about four years ago.”

The process of making challah, which can take up to nine hours depending on quantity, starts with yeast. Schifman, who uses dry yeast, begins by activating the yeast with warm water. From there, she adds sugar, eggs, honey, oil and flour.

She then begins to knead the bread, which Schifman said is seen by many bakers as a meditative process.

“It seems like a very opportunistic time for me to zone out, and a lot of people will pray or say the names of people who might need healing or blessing,” Schifman said.  “That’s just something that I enjoy whenever I’m kneading.”

After letting the bread rest for an hour or so, Schifman braids the bread, tops it with an egg wash and bakes the challah.

As to why challah is an important part of Jewish culture, Schifman said, there isn’t one right answer.

“It’s been something that’s been an item that’s stuck through generations and a lot of people use it as a way to have a connection with family,” Schifman said. “It’s something that people can find enjoyable and of course it’s more than just bread. It’s an opportunity to reconnect with your family or catch up on the week.”

Schifman said for those not familiar with the Jewish culture, sharing challah with them is a way she can share more about her heritage.

Because many Topekans who are Jewish are elderly, Schifman said, she hopes her challah is a way for them to feel connected to their community.

“Everyone loves homemade items,” Schifman said. “I think it’s just a way for people to feel like they have a connection with someone else. That’s a lot of my customers actually. They are a little bit older and they live by themselves, so that’s what I hope.”

Volunteers see the fruit of their efforts at KNI food distribution