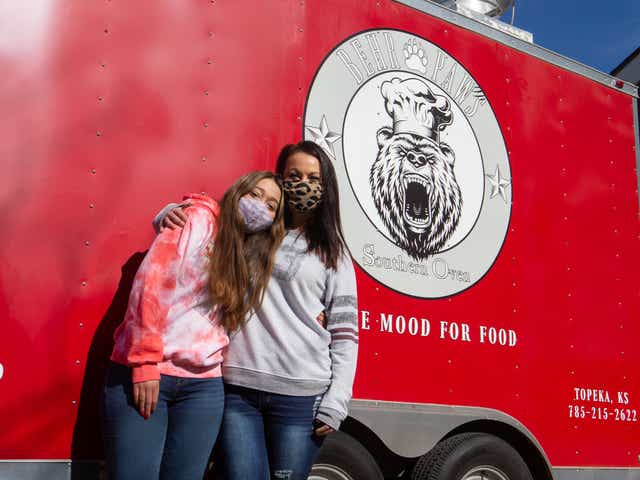 TOPEKA, Kan. – A Topeka family has turned a family activity into a business with its new food truck, Behr Paws Southern Oven.

People looking for the food truck can find it parked at the animal shelter from 7:30 a.m.-noon Tuesday and Saturday mornings, weather permitting.

According to Ashley Behrens, Behr Paws Southern Oven — a play on the couple’s last name — serves food with a Creole twist — a specialty of Eugene Behrens.

“My husband cooks really well,” Ashley Behrens said. “Everybody loves his breakfast burritos and his salsa, so I think we’re going to kind of run with that.”

If the idea of breakfast burritos isn’t enough to get you standing in the food truck’s line, maybe a plate of biscuits and gravy, breakfast bowls or smoothies will.

While the food truck is currently serving breakfast, Ashley Behrens said, the menu and hours will change.

“We will probably change the menu up depending on what everyone wants,” Ashley Behrens said. “There’s some events in the fall that start Friday night so we’re not going to make breakfast burritos.”

Not just a food truck, but a way to serve the Topeka community

The Behrens are not only using the food truck as an outlet to serve the community but to connect with its residents.

“With the pandemic, we wanted to be more involved in the community,” Ashley Behrens said. “We’re kind of tired of just being at home, working from home. We thought (a food truck) would be really great. We also kind of wanted to see if we could support some other businesses with helping them bring in some traffic”

When Behr Paws Southern Oven is parked at a business, such as the humane society, Behrens said, the couple will donate a portion of sales to the business.

“(Helping Hands) has a really good cause … ” Ashley Behrens said. “If we’re going to do this, we wanted to be able to support other local businesses in the area.”

She said the first day parked outside the humane society went well and allowed the couple to shake off the first-day jitters.

“We were just nervous as can be, but everybody was just so nice,” Ashley Behrens said. “We just wanted more connection with people.”

“This summer we were talking about what could we do, especially with my son,” Ashley Behrens said. “He was working at Dillons and it was kind of like, ‘This is scary with the amount of traffic.’ “

Now Maliyah and Malachi Lewis can work in the food truck, all while spending time with family.

“With the pandemic, I thought it would be really good for the kids if they were more hesitant about working somewhere super busy like the grocery store or the mall that they could have a safe place to work out of,” Ashley Behrens said.

As a family, Ashley Behrens said, they like to turn up the music — an oldies station is preferable — and cook. The family hopes to bring that same energy to the food truck and offer the community a different flavor.

“I think we’re all really craving engagement with the community so it’s like, ‘What can we do?’ ” Ashley Behrens said. “We just thought, ‘Hey let’s try it out and see what happens. We’ve never owned our own business before so we thought we’ll just have some fun with it and see how everybody likes it.”

What’s your favorite place in Topeka to eat pancakes? We want to know.