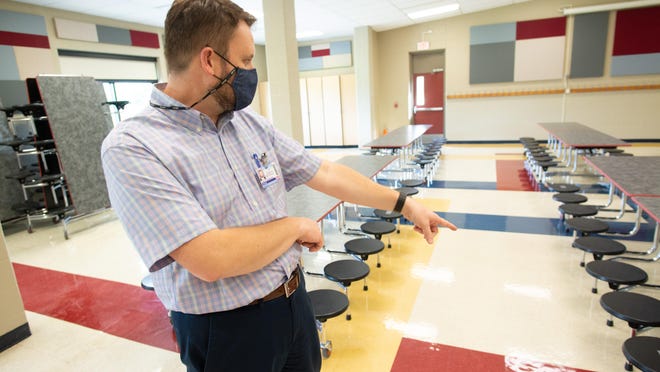 The epicenter of these debates have been in Johnson County, but as of Thursday, not much of it has touched Topeka schools.

Last week, the governor signed into law a comprehensive package pushed by state GOP lawmakers that placed limits on COVID-19 restrictions at all governmental levels. That includes local school boards, which have been given under the new law sole authority over closing down schools or implementing virus restrictions.

At the same time, though, any “aggrieved” person is now able to request a hearing with the school board to be held within 72 hours to review whether a order is necessary, and a board has to issue a decision within a week.

If unsatisfied, the person then can essentially file a civil suit in court for a hearing within 72 hours, and a decision to be made within a week after. The school board would have to prove that such an order was “narrowly tailored” and is the “least restrictive means,” a high standard, or else relief from the order is granted.

Such hearings with school boards over face covering requirements have started or been requested in the last week in multiple Johnson County schools and at least one Sedgwick County school.

But here in Shawnee County, there have been few, if any, signs that such hearings are present.

“USD 501 has not received any requests for hearings over the mask requirement,” said Erika Hall, spokeswoman for Topeka Unified School District.

There also haven’t been any public notices for similar hearings for Seaman School District as of Thursday.

Shawnee Heights USD 450 hasn’t received hearing requests either, but it is preparing for such a possibility. In its most recent board meeting, interim Superintendent Matt Hirsch was appointed the hearing officer specifically for this new law.

“I don’t know of any concerns right now, but time will tell,” Hirsch said through a spokesperson. “We are developing a process for these hearings if there is a need to have any.”

USD 450 is sticking with its mask requirements and other protocols regardless for now, saying the new law hasn’t deterred the district or given officials second thoughts.

“Masking is an important element in our safety plan and the wearing of masks reduces the number of student quarantines in our schools,” Hirsch said. “We want to have the most productive end of the school year as possible, and an important part of this is keeping students at school as much as possible.”

The Auburn-Washburn School District has had no hearing requests, too, a spokesperson said after speaking with the superintendent.

“Auburn-Washburn will adhere to all laws including SB 40 if a hearing is requested,” said spokesman Martin Weishaar. “We continue to consult with public health officials and local, state, and national public safety guidelines to determine the best path forward for the health and safety of our students and staff.”

Mask wearing has become political and contentious over the course of the COVID-19 pandemic, within and outside schools. The new law, Republican lawmakers have said, is to give folks due process over restrictions that can be seen as infringing on individual freedoms and rights.

But others have criticized these new hearings as a waste of public time and resources, and a way for the minority to impose its will on a majority. After all, only one complaint is needed to set the whole motion in process.

In addition, some say the process is disruptive as schools try to end the school year with successful in-person learning, of which masks and other COVID-19 restrictions are necessary to do so safely.

Parts of how the law will play out in school boards still remains unclear. Statute require the hearings can only be requested within 30 days of the “action” or order, but the language is still vague.

“The statute does not make clear whether a student, employee, or parent or guardian of an aggrieved student may request a hearing only when the board enacts a new COVID-related rule or policy, or whether complaints may also be filed concerning long-standing policies and procedures, such as those adopted in school reopening plans in the Fall of 2020,” said the Kansas Association of School Boards.

How things will ultimately play out, from what “relief” means to who exactly is “aggrieved,” would likely be left up to interpretation from the courts.

7th St. in Topeka to close for crane placement