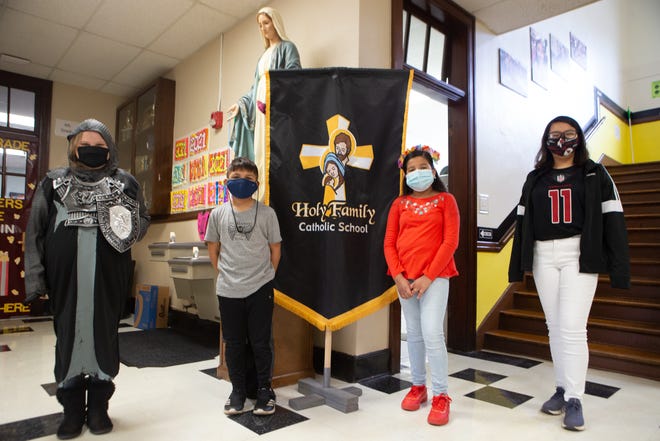 TOPEKA, Kan. – Principal Nick Anderson stood outside Holy Family Catholic School on Tuesday morning and, opening the door for them, checked the temperatures of Saints Sebastian, Francis and Joseph as they walked into the building.

He greeted each student’s family by asking them how they were — a question that has become more than a gesture when schools have been charged with keeping the coronavirus out of their buildings — and welcomed them for the second day of National Catholic Schools Week.

Especially in a year when finances have been tight for Catholic schools from added COVID-19 expenses and potential declines in enrollment, the week — a school spirit week of sorts for most Catholic students — has taken on an always-there, but now more emphasized, sense of appreciation for community benefactors who have pillared Topeka-area Catholic schools in times of need.

“Our whole community takes care of these kids, and this is an opportunity for them to recognize it and appreciate it, and for the folks in our church community to see the fruit of their labor and their donations and generosity,” Anderson said.

At a school like Holy Family, which caters to the predominantly Hispanic and lower-income Oakland neighborhood in eastern Topeka, few parents pay the school’s actual cost per student, which Anderson pegged at about $5,500. About 75% qualify for free or reduced lunch under the U.S. Department of Agriculture’s definition of lower-income families.

Instead, the K-8 school is heavily subsidized by external community donations and financial support from the two parishes the school serves, Sacred Heart-St. Joseph and Our Lady of Guadalupe. Many parents only pay between $100 to $700 max in yearly tuition thanks to that community support.

Even then, the pandemic has had a disproportionate financial effect on the lower-income families served by Holy Family, and added to the costs of switching to remote learning in March, Anderson said there was a time in the spring when school officials were afraid the school could go under.

But with continued parish support and some funding from federal COVID-19 relief programs, the school set out to make a plan for the 2020-2021 semester.

“We went into the school year bright-eyed and bushy-tailed to do what we could to stay in-person,” Anderson said. “We had all of these plans and phases, like other schools, and somehow we’ve managed to keep enough staff in the building and to keep kids safe.”

Catholic Schools Week, then, has also been a celebration of the relative success the schools have had in keeping the virus outside its walls. Most Catholic schools tend to have lower enrollment and class-size ratios than their public counterparts — a benefit that has allowed them to more easily social distance and continue with continuous, in-person schooling.

Normally, the Catholic schools might host schoolwide assemblies and Masses, and the fifth through eighth grades from the area Catholic schools would gather at Hayden High School for a Mass led by Archbishop Joseph Naumann of the Archdiocese of Kansas City.

This year, though, schools have had to settle for more small-scale celebrations, and attending Mass might mean watching it virtually from a classroom desk rather than a church pew.

Organizations come together to help feed the community