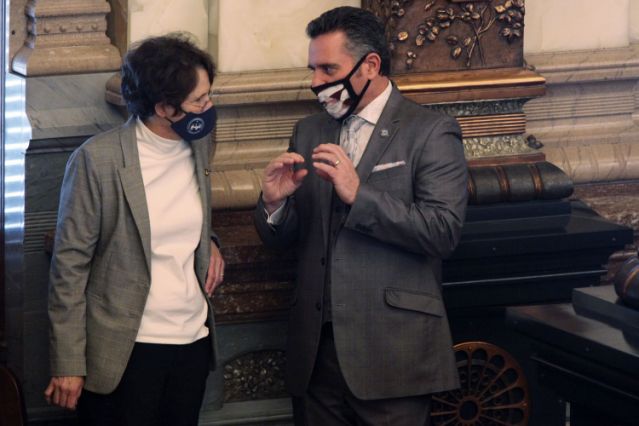 TOPEKA, Kan.— Republican lawmakers in Kansas are struggling to contain their impulses to slash state income taxes, conjuring memories of a past, nationally notorious GOP tax-cutting experiment as they try to enact some reductions over Democratic Gov. Laura Kelly’s objections.

Some Republicans worried Wednesday that action on a tax bill by the GOP-controlled Senate actually moved them a step backward in their efforts to provide relief to individuals and businesses paying higher state taxes because of federal tax changes in 2017. Senators on Tuesday tripled the size of a GOP tax relief bill so that it would cost the state more than $1.3 billion in revenues over three years — and possibly cause budget shortfalls.

Democrats quickly suggested that Republicans were moving Kansas back toward income tax cuts enacted in 2012 and 2013 under GOP Gov. Sam Brownback. Those cuts were largely repealed in 2017 following massive, persistent budget shortfalls that forced GOP lawmakers to repeatedly cut spending and boost other taxes to keep lower income taxes.

Sen. Ethan Corson, a freshman Kansas City-area Democrat, called the Senate’s bill “a budget buster” and added: “This is a bullet train to Brownbackville.”

Brownback remains a potent political reference in his home state. Under him, Kansas became the example for other states of how not to do tax policy; he was deeply unpopular when he left office in 2018, and Kelly won the governor’s race that year largely by running against his fiscal policies.

Some Republicans had misgivings about this year’s tax bill, and four joined the Senate’s 11 Democrats in voting no.

“Fool me once, but you won’t fool me twice,” Sen. Jeff Longbine, an eastern Kansas Republican, said in explaining his no vote, adding that he would support a “reasonable” plan.

The Senate’s 24-15 vote sent the bill to the House and indicated that Republicans generally liked changes to extend tax relief to more individuals. But the bill fell three votes short of the two-thirds majority that would be necessary to override a veto from Kelly, who had earlier in the day criticized the smaller GOP plan as “unthinkable” and “particularly irresponsible” during the coronavirus pandemic.

While Democrats invoked Brownback during the debate, this year’s legislation doesn’t embody his push to phase out state income taxes or include other policies he advocated. Instead, top Republicans are focusing on returning extra state revenues generated from the federal tax changes in 2017, which were championed by former President Donald Trump.

Those federal changes discouraged people from claiming itemized deductions on their federal tax returns. Kansas law doesn’t allow people to itemize on their state returns if they don’t on their federal returns.

Republicans have argued that the state’s revenue windfall is like finding someone’s lost wallet full of cash on the sidewalk. The Senate began with a bill that would allow people to itemize on their state returns whether they do or not on their federal returns. It also contained tax breaks for businesses, with the relief totaling $423 million over three years.

Anticipating a Kelly veto, Republicans and their allies are looking for a plan that garners supermajorities in both chambers — and that means keeping the cost to the state down, even as GOP lawmakers want broader cuts. Eric Stafford, a lobbyist for the Kansas Chamber of Commerce, said the Senate’s debate “went in the opposite direction.”

“The endgame is to get something passed, to the taxpayers,” said Senate tax committee Chair Caryn Tyson, another eastern Kansas Republican. “If we’re not producing products, then it’s not good for anybody.”

During their debate Tuesday, senators added provisions to exempt Social Security and other retirement income from taxes and a proposal from Kelly to increase the state’s standard income tax deductions by 35% over two years. But the Senate rejected Kelly’s proposals to pay for her measure by imposing the state’s 6.5% sales tax on online music, movies and streaming services and on the sale of goods on websites such as Amazon, eBay and Etsy.

Democrats said the changes broadened a bill that they initially saw as focused on helping wealthy individuals and large corporations.

Public meeting to be held to discuss Polk-Quincy Viaduct