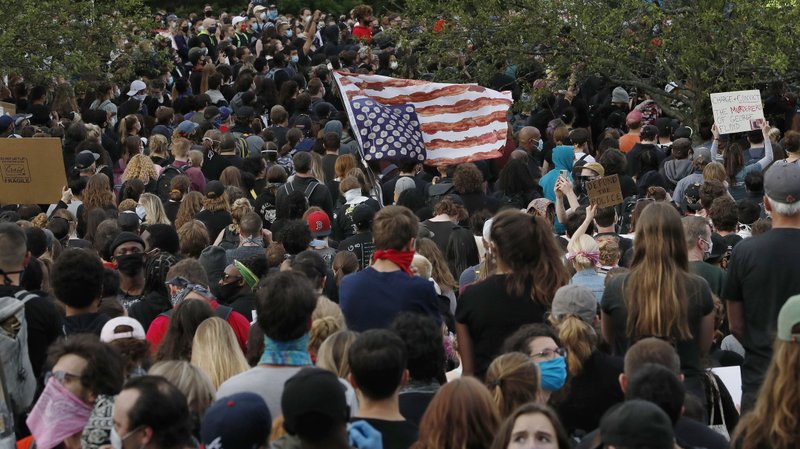 TOPEKA, Kan. – At a time when violence has erupted at protests against police brutality held in other cities, Topekan Ariane Davis said she felt pleased with the large turnout and peaceful atmosphere of the rally she organized that took place here Saturday.

“You guys have shown me why I’m proud to be a Topekan today,” Davis told a racially diverse crowd of about 500 people, who stood gathered around the south steps of the Kansas Statehouse.

A series of speakers made impassioned pleas for justice regarding the situation in which George Floyd, a 46-year-old African-American man, died Monday after white Minneapolis police officer Derek Chauvin continued to kneel on his neck after he became unresponsive.

Marchers then walked along the Statehouse grounds on its exterior sidewalk carrying signs and chanting slogans that included “Black Lives Matter” and “No Justice, No Peace.”

Passing motorists, including the driver of a marked Topeka Police Department sport-utility vehicle, showed support by honking, holding a fist in the air, or both.

Topeka police Chief Bill Cochran had said Thursday on Twitter that the actions that caused Floyd’s death were “indefensible.”

Chauvin and three other officers were fired, while Chauvin has been charged with third-degree murder and manslaughter.

Law enforcement presence was minimal for Saturday’s event, which Davis said was to be all about “love and positive energy.”

Skies were partly cloudy and temperatures in the lower 70s as speakers spent about an hour sharing their perspectives regarding Floyd’s death and police treatment of African Americans in general.

Some made reference to Dominique White, who was fatally shot by two Topeka police officers in September 2017. Authorities concluded the shooting was justified. Members of White’s family are pursuing a lawsuit against the city.

Some of Saturday’s speakers made it clear they felt angry.

“God says it is OK to speak with righteous anger,” said Juanice Crowley.

Crowley voiced frustration that African-American people continue to die unjustly at the hands of law enforcement.

“You cannot keep saying ‘all lives matter’ when the world keeps showing us black lives don’t,” she said.

Crowley expressed appreciation for the racial diversity of Saturday’s rally, joking that those present should educate each other and “hug each other without making each other sick right now.”

Saturday’s rally-goers wore masks in an effort to slow the spread of the coronavirus.

Saturday’s speakers included Ed Collazo, internal police auditor for the City of Topeka, who encouraged those present to contact him to share any concerns.

Downtown businesses The Pennant and Iron Rail Brewing made water available for protesters.