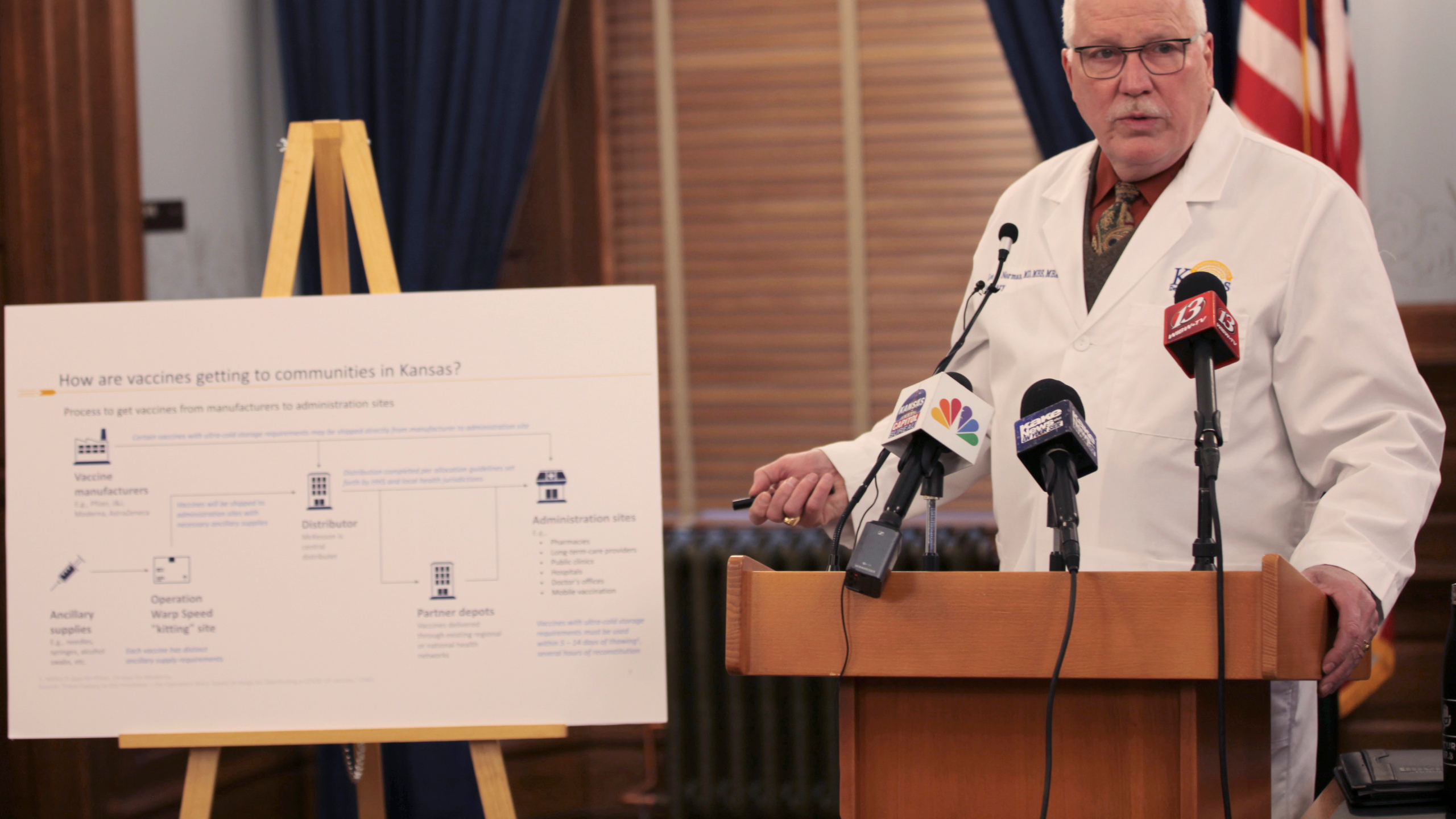 TOPEKA, Kan. — Kansas is likely to have pockets of a new, more contagious coronavirus variant first identified in the United Kingdom, and public health officials believe it could become the state’s dominant strain, the head of the state health department said Tuesday.

Dr. Lee Norman also said that winter weather across the central and eastern U.S. has created a “brief speed bump” in the second phase of the state’s COVID-19 vaccine distribution. Norman said the shipment of some vaccine doses from the federal government have been delayed a few days, and below-zero temperatures prompted the Shawnee County health department in northeast Kansas to cancel a vaccination clinic.

The first recorded Kansas case of the United Kingdom coronavirus variant was in Ellis County earlier this month, infecting a student-athlete at Fort Hays State University “who never was particularly very ill,” Norman said. The state health department said Monday that a second case had been identified in Sedgwick County, home to Wichita, and Norman said the person infected was a “young man” who had traveled out of state.

Public health officials said the emergence of the coronavirus variant in a majority of states means that people can’t let their guard down about wearing masks, social distancing and taking other precautions. Norman said the case in Ellis County in northwest Kansas and in Sedgwick County in south-central Kansas are not connected.

“We are getting the feeling that it will become a dominant strain because it is more infectious,” Norman said during an online briefing with University of Kansas Health System officials. “I’m sure there’s going to be pockets of spread in local regions.”

The state identifies coronavirus variants through genetic testing, and Norman said the state health department is now doing it for medical providers “whenever we’re asked.”

Meanwhile, Kansas is still dealing with the economic effects of the pandemic, and Gov. Laura Kelly said Tuesday that the state will receive $200 million under the last federal coronavirus relief legislation approved in December to help people struggling to pay their rent and utility bills. The city of Wichita plans to take applications for its residents starting Feb. 22, and the state’s Housing Resources Corporation will be begin taking them from people outside Wichita on March 15.

Kansas has seen the number of new confirmed and probable COVID-19 cases drop in recent weeks. The state averaged 641 new cases a day for the seven days ending Monday, according to state Department of Health and Environment data, the lowest figure since early October. The state averaged 30 additional COVID-19 deaths a day during the same period.

The state health department is reporting that as of Monday, nearly 292,000 Kansas residents, or 10% of the population, have received at least the first of two required vaccine doses. Norman has said repeatedly that the number of shots given is actually higher than reported because of a lag in reporting that the state is working to end.

The state launched its second phase of vaccinations last month, and it covers people over 65, as well as teachers, workers critical to the economy and people in group living situations, including prison inmates. That’s as many as 1 million people, and Gov. Laura Kelly and the health department have repeatedly faced criticism that it’s moving too slowly.

The Shawnee County Health Department in Topeka also cited the possibility of rolling electricity blackouts in canceling its clinic in an older exhibition building near the city’s largest arena and convention center, though Evergy, the electric provider for Topeka, later announced that blackouts used to limit the demand on its system had been suspended Tuesday morning.

Kansas to focus on COVID-19 shots for teachers, school staff