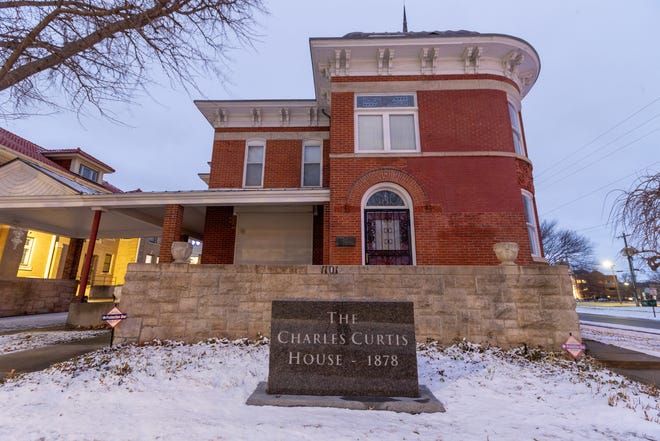 Meanwhile, Curtis’ former mansion at 1101 S.W. Topeka Blvd. is for sale by the three siblings who inherited it from their parents, Don and Nova Cottrell, who each died recently after having restored the house.

The asking price is $750,000, The Topeka Capital-Journal learned Friday from Patty Dannenberg, who owns the house with her brothers, Gene Cottrell and James Cottrell.

A CBS-TV cameraman was in Topeka this month to shoot video of that mansion for a report on Curtis to air Sunday on the “CBS Sunday Morning” program, Dannenberg said.

Curtis had already been the focus in recent months of pieces by media outlets that included the New York Times, the Washington Post, the Philadelphia Inquirer and CNN.

Those reports told of how Curtis is the only U.S. vice president with significant Native American ancestry, having held that office under President Herbert Hoover.

Curtis was born in 1860 in what was then Kansas Territory. Kansas subsequently entered the Union as a state in 1861. Curtis grew up to be an attorney, and was Shawnee County prosecutor from 1885 to 1889.

Near the end of a term plagued by economic depression, Hoover and Curtis lost their bid for re-election in November 1932 to Democrats Franklin D. Roosevelt and John Nance Garner. Curtis died in 1936, at age 76, and is buried in Topeka Cemetery beside his wife, Anna.

As vice president, Curtis’s official address was the stately mansion at 1101 S.W. Topeka Blvd., where he began living in 1907. The two-story house was built in 1879 and encompasses 4,468 square feet, according to the website of the Shawnee County Appraiser’s Office. It is listed on the National Register of Historic Places.

Don and Nova Cottrell, who lived at Perry in Jefferson County, were newly retired when they bought the Curtis home in 1993, Dannenberg said.

She said Nova Cottrell, during 25 years of being employed at Josten’s in Topeka, often referred to the Curtis mansion as “my house” as she passed by while carpooling with other women. Her friends likewise called the mansion “Nova’s house,” Dannenberg added.

She said that after Nova Cottrell retired, she was working at an antique booth in a mall when a real estate agent she knew told her the mansion was for sale and suggested the Cottrells buy it and keep Nova Cottrell’s antiques there.

Don Cottrell agreed to look at the mansion but said he wasn’t going to buy it, Dannenberg said.