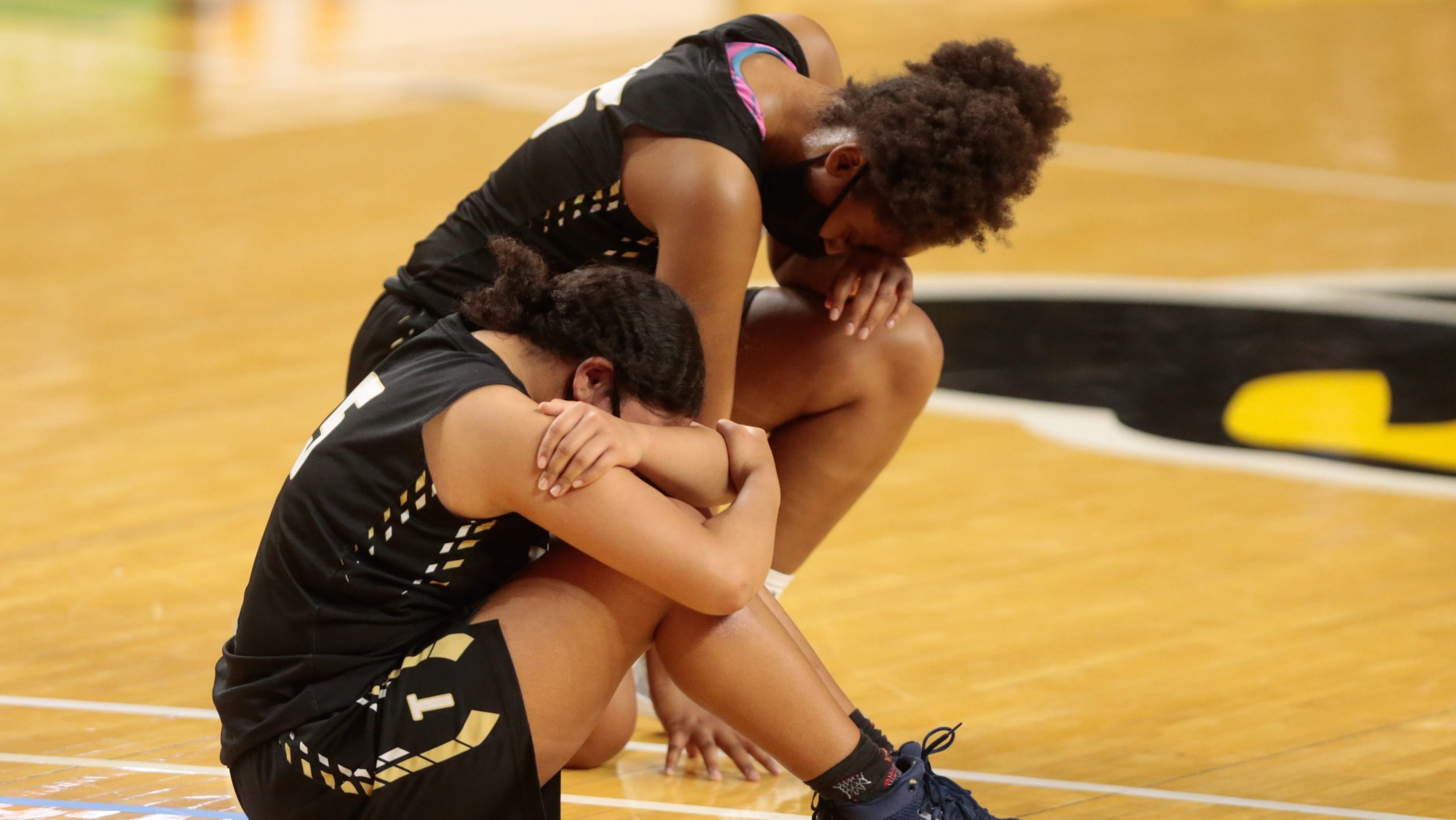 TOPEKA, Kan.— Three straight years, Topeka High’s girls have been on the brink of exultation, the program’s first state championship since 1982 within their grasps at Wichita’s Koch Arena.

And three straight years, the Trojans have left Wichita with their collective hearts broken.

“It just hurts,” High coach Hannah Alexander said. “To be right there two years ago and then to go what we went through last year and then be right there again this year. It just sucks that it came down to this.”

For the second time in three years, High had to stand on the Koch Arena floor and watch another team hoist the championship trophy they’ve craved. On Saturday, it was Shawnee Mission Northwest denying High the title, taking a 61-54 victory in the Class 6A state championship game in a battle of heavyweights.

Northwest capped a 23-0 season with its first state title in program history. High finished 23-2 and with yet more unfinished business. In between their runner-up finishes, the Trojans saw last year’s bid for an undefeated season snatched away when the state tournaments were canceled because of the COVID-19 pandemic.

On a mission all season to make sure they got back in position to control their own destiny, the Trojans fell agonizingly short.

“We knew it was going to be a great game and both teams were going to compete the entire way,” High senior Ja’Neysha Hendricks said. “Some of our shots weren’t falling and things didn’t go our way, but I’m so proud of this team. Words can’t even explain how hard we worked to get here, especially this senior class coming in as freshmen.

“We built this program and now we hope they continue to build on what we started.”

The showdown featured two of the state’s best bigs in High’s NiJaree Canady and Northwest’s Kennedy Taylor, and both delivered big performances. After carrying the Trojans on her back in Friday’s semifinal win over Dodge City, Canady was once again at her best in her battle with Taylor.

The difference, however, was the performance of their supporting casts. Canady’s Trojan teammates struggled to find their offense, hitting just 10 of 47 shots, including 4 of 21 3-pointers.

Northwest, meanwhile, saw Saige Grampsas come up huge. Grampsas hit all five of her field goal attempts in the first half en route to a 12-point half, and she never let up, finishing the game 8 of 9 from the floor and 8 of 10 at the free-throw line for a big-time 26-point explosion.

“She’s the X-factor,” Northwest coach Tyler Stewart said. “She’s cool under pressure and she’s had big games before. Last year against Derby, she had a huge game at state. When she gets to Wichita State, she makes plays and I’m glad she does.”

Grampsas scored nine of her 12 first-half points in a second quarter that saw Northwest turn a narrow 15-14 deficit entering the period into a 26-21 halftime lead. She scored five in an 8-0 run that built a 26-19 lead before Hendricks scored late in the half, just the sixth points of the quarter for the Trojans.

But after enduring a 2-of-10 shooting performance in the second period, High woke up in the third quarter. Down 31-26, the Trojans got back-to-back 3-pointers from Lilly Smith and Tae Thomas to take a 32-31 lead. Two free throws by Canady a possession later stretched it to a three-point margin and it seemed High had found its groove.

Instead, Grampsas delivered for the Cougars, hitting a 3-pointer to tie the game. After Kiki Smith scored to give High back the lead at 38-36, Taylor stepped out and hit a go-ahead 3-pointer and High never led again.

“A few more shots fall or some calls go our way, you never know, it could have been a different outcome,” Alexander said. “But they’re very solid and they just had a little bit more than us to the final end.”

After Northwest went up by five early in the fourth, Lilly Smith converted a three-point play to pull High back within two with 6:24 left. Grampsas had yet another answer with a driving floater and then added a three-point play with 4:52 left that was the back breaker for the Trojans, particularly with Kiki Smith fouling out at the 5:22 mark of the fourth.

Canady scored five quick points to get High within five with four minutes left and a Smith steal and layup made it a three-point game with 2:59 to play. But Northwest got a runner from Kylie Dunn and then made 6 of 10 free throws in the last 1:46 to clinch the perfect season.

“We knew it was going to be a battle,” Stewart said. “We felt all year that Topeka High and us were the two best teams in 6A and we were hoping we were going to be able to play them in a state championship game. We just continued to grind and success happened at the end.”

Lilly Smith added 10 points for High in her final game, one of five Trojan seniors along with Hendricks, Jae’Mya Lyons, Zoe Caryl and Ayana Leesman.

“I can’t say enough about this group of ladies, they’re very special,” Alexander said. “They built a legacy and we’re very proud of what they’ve done. When I first got here, we started at the very bottom and got the right kids in here, and to get it turned around just says how special they are.

“We’re losing a lot of key components, so it’s going to be even harder next year, but these girls should stay hungry to get back here.”