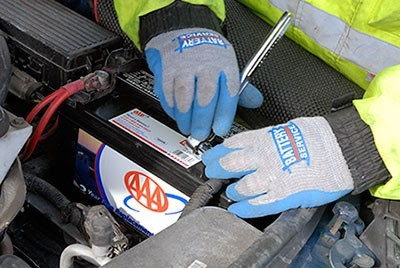 Kansas – Colder temperatures can be a drain on a lot of things, including your car’s battery.

AAA Kansas reports that in the past week alone, its emergency roadside assistance calls increased 101 percent from week before. More than 1,300 rescue calls were made on Kansas roadways. AAA spokesperson Shawn Steward says about 76 percent of those calls were for dead batteries or other cold weather engine failures that required towing.

“Batteries especially are susceptible to this level of cold. At zero degrees, a car’s battery loses about 60 percent of its strength, but the engine needs about twice as much power to start,” he said.

In some makes or models, it may be difficult to tell when your battery is beginning to fail. But Steward says there are some common warning signs.

“If you do see your headlights, or lights inside the vehicle not being quite as bright as they once were, or if your power windows are operating a little slower than they used to, that could be an indication that your battery is not up to full charge and you should get it in to a trained technician as soon as possible,” he said.

The average battery only lasts about 3 to 5 years. Even at 32 degrees, a battery is 35 percent weaker, according to AAA. To prolong the life or keep from draining your car’s battery, Steward suggests unplugging or shutting off some of the essentials and starting your vehicle fairly regularly.

“As you turn off the vehicle, turn off any extra elements of the vehicle (i.e. heated seats, heated steering wheel, radio, the heater), that way the battery isn’t having to draw extra to power those elements when you start your vehicle the next time,” he said.

It’s also smart to have an emergency road kit in your vehicle.

“Extra warm clothes, gloves, hats, coats, maybe some extra blankets or a sleeping bag is always good. You should also think about carrying a snow shovel. Some material for traction like sand or kitty litter works really well,” Steward added.