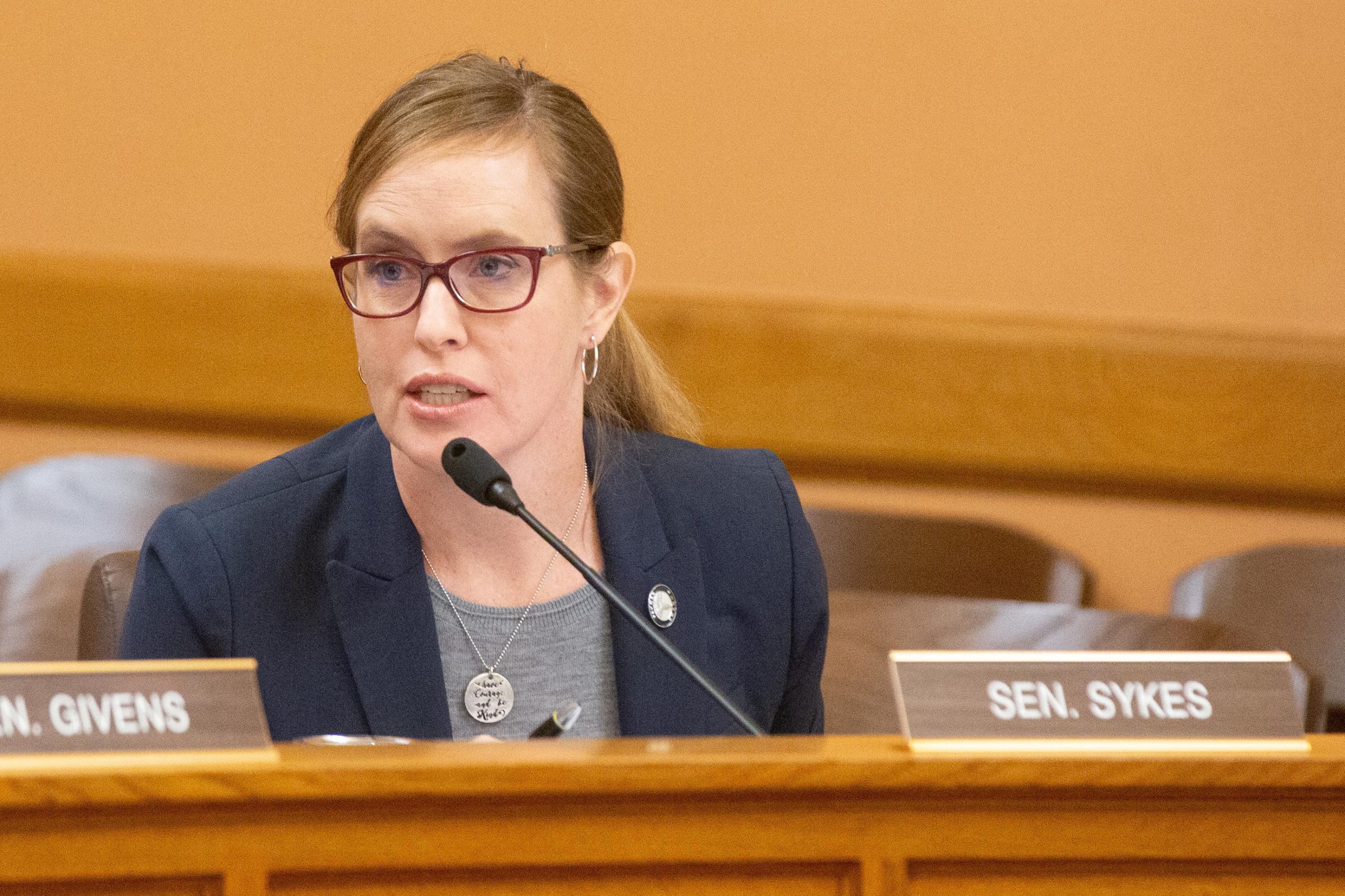 TOPEKA, Kan. – Sen. Dinah Sykes bluntly appealed to colleagues for removal of procedural barricades erected by Senate GOP leadership irritated by failure of the House to pass a constitutional amendment declaring no right to abortion existed in the state’s Bill of Rights.

The Senate passed the abortion measure Jan. 29, but the House was four votes shy Feb. 7 after Gov. Laura Kelly urged representatives to oppose it. Senate President Susan Wagle immediately responded to the abortion hiccup by flexing her authority to freeze Senate legislation opening the door to expanding Medicaid health services to 130,000 low-income Kansans. Wagle was keenly aware Medicaid stood as a top priority of Democrats, moderate Republicans and the governor.

“The decision facing us today is: Will we fulfill our responsibility to represent our districts?” said Sykes, a Republican-turned-Democrat. “Or, will we give in to tyrannical demands of those in leadership who are afraid of having tough discussions we need to have in order to move our state forward? How long will we allow ourselves to be held hostage by those who use threats to keep us in line?”

At midpoint of the 2020 legislative session that began in January, the House and Senate have individually passed dozens of bills. None carries the policy heft of an amendment to the Kansas Constitution or a law allowing Kansas to join 35 other states that expanded access to Medicaid’s health coverage. The governor signed the session’s first bill on Feb. 21. It allows Valley Center to reverse annexation of land in a cemetery district.

“This is just the first half of the session,” said Wagle, a Wichita senator and the chamber’s top administrator. “We’ve got a long way to go. There’s a lot of time for people to change their minds and solve the problem before that gavel hits and we close down the session.”

Wagle, who is seeking the Republican nomination for U.S. Senate, said the Senate debated nearly 50 bills in the past week or so. That included bills on sports gambling, expansion of state-funded ACT testing, loan forgiveness for rural health professionals, tracking of foster children in school and rules on raw milk advertising.

Wagle said legislators complaining about the logjam voted for Senate rules she reasonably relied upon to increase pressure to pass the constitutional amendment. The same rules give members the right to pull any bill out of committee onto the Senate floor — if that faction can secure backing of 24 of the 40 senators, she said.

“Our rules that were unanimously adopted by Democrats and Republicans allows for exceptions for a leader that’s using her own management style,” Wagle said.

Action by Wagle to hold Medicaid hostage led the three Republicans who preceded her as Senate president to author a guest column in Sunday’s edition of The Topeka Capital-Journal. Former Senate Presidents Dick Bond, Dave Kerr and Steve Morris, who led the Senate from 1997 to 2013, denounced “extreme partisanship and ideology-driven decisions” exemplified by Wagle’s handling of the abortion and Medicaid measures.

“The Senate president’s reckless decision to pull numerous promising bills after the constitutional amendment failed only showed she was focused more on drawing attention to her U.S. Senate race than doing what’s best for Kansas,” their opinion piece said.

“We each encountered tough situations as Senate president,” the former GOP Senate presidents said. “Still, we didn’t try to hijack an entire legislative session when we disagreed with an outcome.”

House Speaker Ron Ryckman, an Olathe Republican, said conflict over Medicaid and abortion obscured action on other legislative fronts. He said the House rejected the governor’s plan to refinance state pension debt, clearing way for progress on budget and tax bills. The House made progress on criminal justice reform, the occupational license bureaucracy, rural economic development, use of at-risk funding on public schools, adoption of foster children and the liability of businesses working with high school students on unpaid internships.

He said House GOP leaders eventually would secure the necessary 84 votes, or two-thirds majority, required to place a constitutional amendment before Kansas voters. The 80-43 vote in February was tantalizingly close to that threshold. The Senate passed it 28-12.

It is possible the solution will require tweaking text of the abortion amendment, Ryckman said, to include exceptions to save the life of a pregnant woman or to serve interests of rape or incest victims. He said advocates still were pushing for the statewide vote in August.

“We’ve asked folks to come not just with ideas but with votes,” Ryckman said. “People have ideas of what they want the text to read, but they’re not promising votes to come with it. When it’s all said and done, we’ll have more than four.”

Rep. Jim Ward, a Wichita Democrat, said the GOP leadership’s obsession with abortion policy threatened viability of other important policy change. He was blocked last week in a bid to insert the Medicaid expansion plan endorsed by the governor and 22 senators, including Senate Majority Leader Jim Denning, into a House bill involving long-term insurance for health care. It was ruled not germane.

“This session is being locked down by a few folks when there is an overwhelming majority of people in this building who want to expand Medicaid,” Ward said. “Be on notice, if there’s a bill that I can attach Medicaid expansion to, I’m going to do it.”

On Monday, Kelly and Denning plan joint appearances in Wichita for discussions about Medicaid expansion with hospital administrators and religious leaders.

Sen. Gene Sullentrop, a Wichita Republican and Wagle ally who chairs the Senate Public Health and Welfare Committee, said his committee wouldn’t send a Medicaid bill to the Senate floor until the House did its part to pass the constitutional amendment on abortion. He assailed Denning for negotiating with the Democratic governor on Medicaid.

“I appreciate that Governor Kelly had a radically pro-abortion record when she was in the Senate,” Sullentrop said. “She doesn’t share this committee’s commitment to protecting the unborn.”

The ruckus over abortion was ignited in April 2019 when the Kansas Supreme Court issued a sweeping ruling that declared the Kansas Constitution granted women the right to decide whether to continue a pregnancy. Opponents of abortion interpreted the decision as the first salvo in the court’s attack on abortion restrictions.

The state’s most prominent anti-abortion organization, Kansans for Life, has taken a key role in lobbying for passage of the constitutional amendment. Recently, Kansans for Life’s advocacy included sending postcards to voters across the state. The mailers were designed to add pressure on abortion amendment swing voters in the House.

Mistakenly, Kansans for Life sent postcards that labeled amendment supporters in the House as allies of Planned Parenthood, which opposes the constitutional change. It isn’t clear how many House districts were hit with the erroneous postcard.

Peter Northcott, who is a lobbyist with Kansans for Life, apologized for the miscue. The organization sent corrective mailers, he said.

In an interview, Northcott left the impression the problem involved “10s of missent mailers” and answered affirmatively when asked if it was less than 100. The Topeka Capital-Journal published a story Feb. 24 quoting Northcott as saying “it was a small number.” However, scope of the damage caused by the mailer wasn’t accurately stated.

“The total number of mistakenly sent postcards is just over 2,000,” Northcott said in response to questions for this story. “Otherwise, I’ll refer you to comments previously made.”