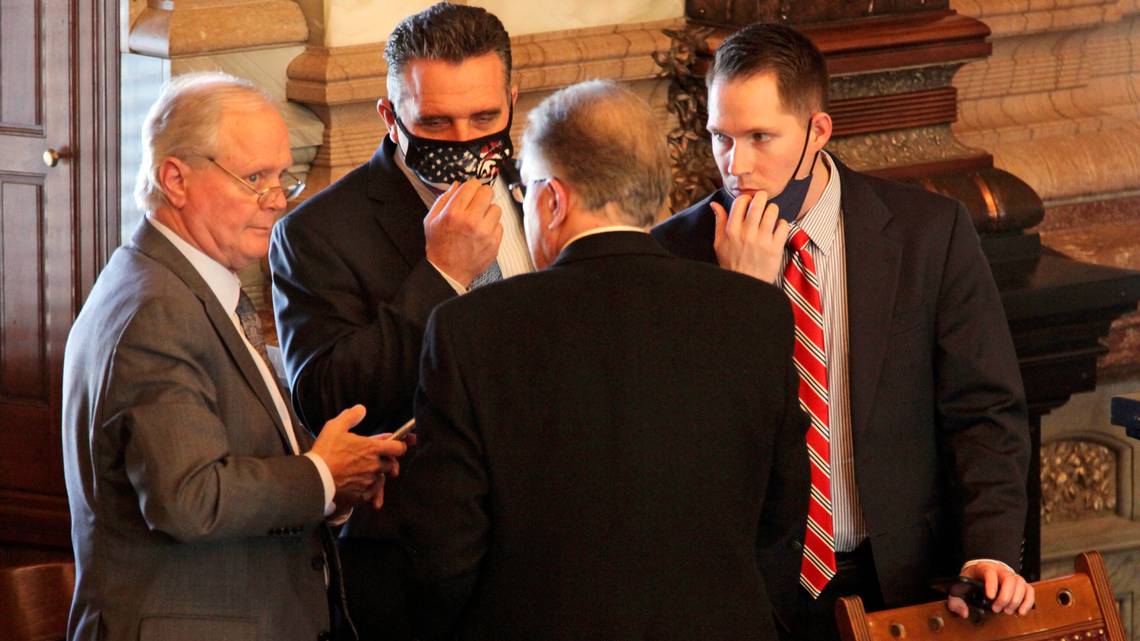 TOPEKA, Kan. — Kansas Senate Majority Leader Gene Suellentrop had a blood alcohol level over twice the legal limit after his arrest, according to court documents released Thursday that allege he refused a Breathalyzer test and told an officer he could “take” him in a fight.

Suellentrop faces a felony charge of fleeing and eluding law enforcement and multiple misdemeanors related to an alleged early morning wrong-way chase on Topeka highways last month. The Wichita Republican has been mostly silent about the allegations against him.

But court documents released to The Star and other outlets reveal new details, including allegations that Suellentrop failed to respond to an officer’s repeated commands to turn off his vehicle once he finally stopped. The documents say his blood alcohol level was 0.17. The legal limit is 0.08.

An affidavit of probable cause signed by Kansas Highway Patrol Officer Austin Shepley says Suellentrop narrowly missed hitting his vehicle and at least one other as he passed by on the wrong side of Interstate 70 shortly after midnight on March 16. Shepley alleges the vehicle was traveling at 90 miles per hour.

Shepley twice attempted a “tactical vehicle intervention,” though his statement doesn’t detail what he did. The second attempt was successful, and Suellentrop’s vehicle almost hit a center barrier wall. Dispatch audio previously reviewed by The Star indicates officers deployed stop sticks in an effort to deflate his tires.

Shepley said that after the vehicle came to a stop, he approached and saw Suellentrop’s left hand out the window. Suellentrop “looked back at me with a confused, frightened, blank stare.”

“He was not registering my commands or responding to them,” Shepley wrote, adding that he could smell alcohol coming from inside the vehicle.

Ultimately, Shepley and a Topeka police officer removed Suellentrop from the vehicle, the affidavit says. Suellentrop had “watery,” “droopy” and bloodshot eyes — and was mumbling with slurred speech.

Because of the location of the stop — on the interstate — Suellentrop wasn’t given a field sobriety test immediately but was taken to the Docking State Office Building, where Shepley says Suellentrop had trouble standing and almost fell over.

“All for going the wrong way,” Suellentrop said, according to Shepley.

Suellentrop declined a search of the vehicle, but officers obtained a search warrant. The warrant application was signed by the officer at 2:35 a.m., nearly two hours after the incident.

Suellentrop was taken to Stormont Vail Hospital, where a blood sample was taken around 3:30 a.m. Shepley described Suellentrop as “slightly aggressive” at this point.

Suellentrop “made reference to physically going up against me. He looked me up and down stating he played state sports competitively in high school. He stated he could ‘take me,'” the affidavit says.

He was then taken to jail.

The day after the arrest, Suellentrop, 69, said he was turning over the bulk of his formal duties to Assistant Majority Leader Larry Alley. But at least one Republican senator, Dennis Pyle of Hiawatha, said last month that Suellentrop was still playing a leadership role in the chamber.

Pyle and Sen. Rob Olson, an Olathe Republican, have called for Suellentrop’s resignation from leadership, while others in the party have taken a wait-and-see stance.

Senate President Ty Masterson has said Suellentrop’s role in the Senate would not change until after his first court date in June.

“There’s still due process and we’re gonna move from there so nothing’s really changed from where we’ve been,” Masterson said last week.

Masterson said Thursday afternoon he was not yet able to comment because he hadn’t reviewed the document.

In addition to their work together in leadership, Masterson and Suellentrop co-own a property in downtown Topeka.

Business records show that Suellentrop is the part owner of a company called Van Buren Place LLC, which owns a building two blocks north of the Capitol on Van Buren Street. A spokesman for Masterson confirmed the Senate president owns half the property.

Suellentrop stands to financially benefit each day he retains the title of majority leader. He will earn at least $1,948 if he holds on to the position until his first court date June 3.

He also remains on the Legislature’s internal governing body, called the Legislative Coordinating Council, and the State Finance Council. Both councils have played significant roles during the pandemic, including reviewing Gov. Laura Kelly’s executive orders.

Suellentrop’s only public comments on his arrest came last month after he addressed a closed-door gathering of GOP senators. In a statement at the time, he didn’t directly address the allegations, but said only that he regretted that “this incident” had caused a distraction for his fellow senators and staff and “from the important issues we are debating on behalf of the people of Kansas.”

JEDO’s small business relief fund will soon be accepting applications. Here is who is eligible for up to $30K.