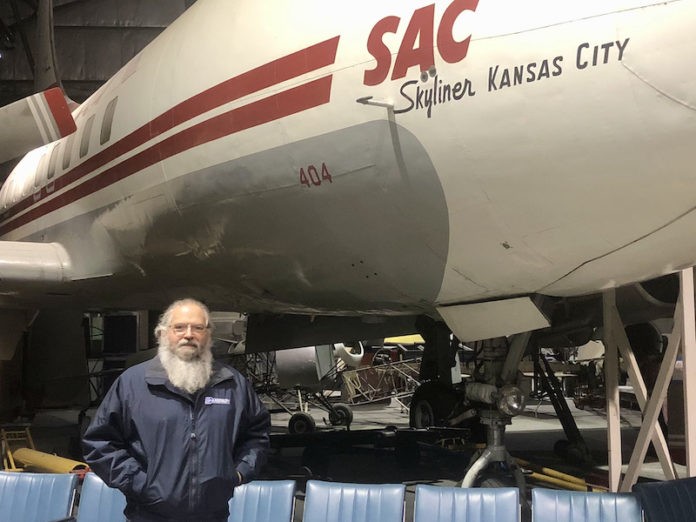 Kansas – The Airline History Museum, an attraction at the Wheeler Downtown Airport for 35 years, is fighting to prevent its collection of classic airplanes from being evicted by the private operator of the city-owned facility.

The non-profit’s dispute is with Signature Flight Support, which holds the master lease with the city to run the airport. The museum has filed a lawsuit in Clay County Circuit Court, and its online petition drive has garnered 6,000 supporters.

“They (Signature) have multiple empty hangars,” said John Roper, chairman of the Airline Museum board. “It’s not like the airport is full and they need more space.”

The museum, a labor of love for local aviation buffs, opened in 1986 at a location on the east side of the downtown airport and relocated to a drafty, 1940s vintage hangar on the west side in 2000.

Over the years, its assembled a collection of classic prop-aircraft including a Lockheed Constellation or “Connie,” a passenger plane that ruled the skies before the Jet Age; a DC-3; a Martin 404; Navy SNJ World War II trainer, and the last 1932 Northrop Delta.

According to Roper, the museum began its run at the downtown airport on good terms with its former private landlord, Executive Beechcraft. It signed a 20-year lease with Beechcraft in 2000 when it relocated to its current hangar.

In 2005, Roper said the city and Beechcraft agreed to bundle all the subleases, including the museum’s, into a new master lease that expired in 2035. In 2006, Beechcraft was acquired by Signature.

It was smooth flying until last year, Roper said.

That’s when Signature told the museum its lease had expired under the terms of the earlier 2000 lease. The museum protested to the city, but was told by the City Aviation Department to settle its differences with Signature.

Orlando-based Signature describes itself as operating the world’s largest network of Fixed Base Operations. A spokesman for the firm said a court ruling has supported its interpretation of the city lease.

“The Clay County Circuit Court determined AHM (Airline History Museum) was not a third-party beneficiary of the Master Lease and that the termination date of AHM’s sublease with Signature Flight Support was December 31, 2020,” the spokesman said in a statement.

“One of the issues in the ongoing legal dispute between Signature Flight Support and AHM is AHM’s failure to pay rent for at least a year.”

Roper said the lawsuit in Clay County remains active and there has been no eviction order issued. He also said an agreement approved by the city in 2010 allows the museum to occupy the space rent-free as long as it remains a non-profit.

“City ordinance demands that we get free rent and Signature signed an amendment to their master lease,” he said.

The Airline Museum currently has about 30 members. Before the COVID-19 pandemic hit, the museum drew an average of 300 to 400 people each week. It also has helped run a Civil Air Patrol program for young people.

The cloud hanging over its lease at the downtown airport has taken its toll in terms of membership and donations, Roper said.

And while the nonprofit is considering a possible relocation — Kansas City International Airport and the New Century AirCenter have been mentioned — it would prefer to remain downtown.

“At the end of the day, we think this is a great location,” Roper said. “It’s central to all Kansas City.

“We want to get this thing with Signature behind us. I’m confident the floodgates will open with donors and the city.”