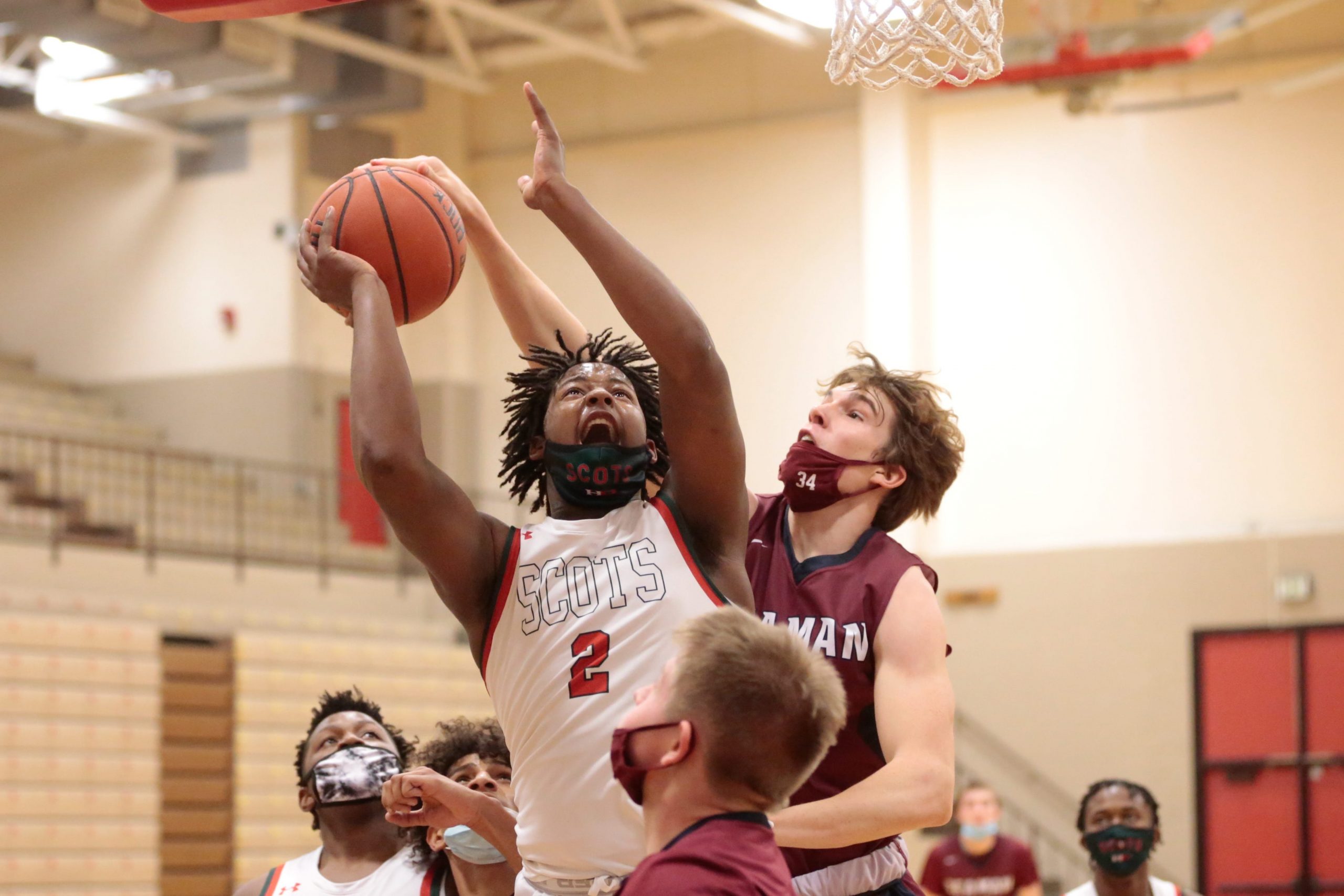 TOPEKA, Kan. – After a somewhat slow start to the season, Powell has been on fire lately and is a big reason for the Scot’s current five-game winning streak. The 6-foot-7 senior has scored at least 25 points in three of his last four games, including twice last week when he scored 59  total points. He went for a season-high 31 in a 63-58 win over Emporia on Tuesday and then added 28 in Friday’s 55-47 overtime win over Seaman, hitting the overtime-forcing 3-pointer with two seconds left and then scoring seven in the extra period.

COACH’S COMMENT: “We know what’s inside of him and we know what he’s capable of,” Williams said of Powell. “I think he’s understanding that now. We need CJ Powell to be himself, to be the most dominating player in the city.”

QUESTION 1: You struggled with consistency early in the season. How hard was that on you coming off being an All-City selection and one of the top players in Class 5A last year?

QUESTION 2: As you’ve come on, the team has hit its stride. Does it feel like the team is back to playing at the level it’s supposed to?

ANSWER: It was tough at the beginning, but now we’re figuring out that we are the best team in the city, in the Centennial League and in the state. We’re very confident right now.

ETHAN BURNS, SEAMAN BOWLING: After seeing teammate DJ Birkenbaugh win two straight meet titles the previous week, Burns took his turn leading the Vikings to a pair of meet titles last week with two wins of his own. He rolled a 692 last Tuesday to win the Topeka West Quad by 82 pins and then followed it up with a 672 at Wednesday’s Seaman Quad to win by 54 pins.

BROOKLYN DELEYE, WASHBURN RURAL BASKETBALL: Saddled by foul trouble in the first half of last Thursday’s game with Hayden, DeLeye came on strong in the second half to help the Junior Blues avoid an upset with a 56-45 win. DeLeye hit 6 of 10 shots and 3 of 5 free throws in the second half, scoring 16 of her 19 after the break to help Rural pull away from a 27-27 halftime tie.

WILL DEVADER/CLAYTON STEPHENSON, HAYDEN WRESTLING: DeVader and Stephenson each captured titles at the Wildcats’ Class 4A District Tournament in Holton last Saturday, helping Hayden to a fourth-place team finish. Seeded just third in his 220-pound bracket, Stephenson knocked off the top-two seeds in dominating fashion, taking a 17-2 technical fall win over Atchison’s Ethan Watson before pinning top-seeded Dalton Roush of Holton in the title match. DeVader captured the 182-pound title, taking a 10-3 win in the finals against Jefferson West’s Keaton Shelman.

LILLY SMITH, TOPEKA HIGH BASKETBALL: Smith provided early punch for the Topeka High girls in leading them to wins over Seaman and Emporia last week, running the Trojans’ winning streak to 36 straight games and this year’s record to 13-0. Smith hit four first-half 3-pointers and finished with 17 points in High’s 63-34 win over Seaman on Thursday. In Friday’s win over Emporia, Smith scored eight in the first quarter, including two 3-pointers, and finished with 14 points in a 59-42 win.

MARQUE WILKERSON, TOPEKA WEST BASKETBALL: Wilkerson completely took over last Tuesday’s showdown between Centennial League co-leaders Topeka West and Washburn Rural, leading the Chargers to a big 63-46 win. Carving up the Rural defense, Wilkerson hit 11 of 14 shots and finished with a game-high 25 points, getting 16 of them in the first half to help West take control.