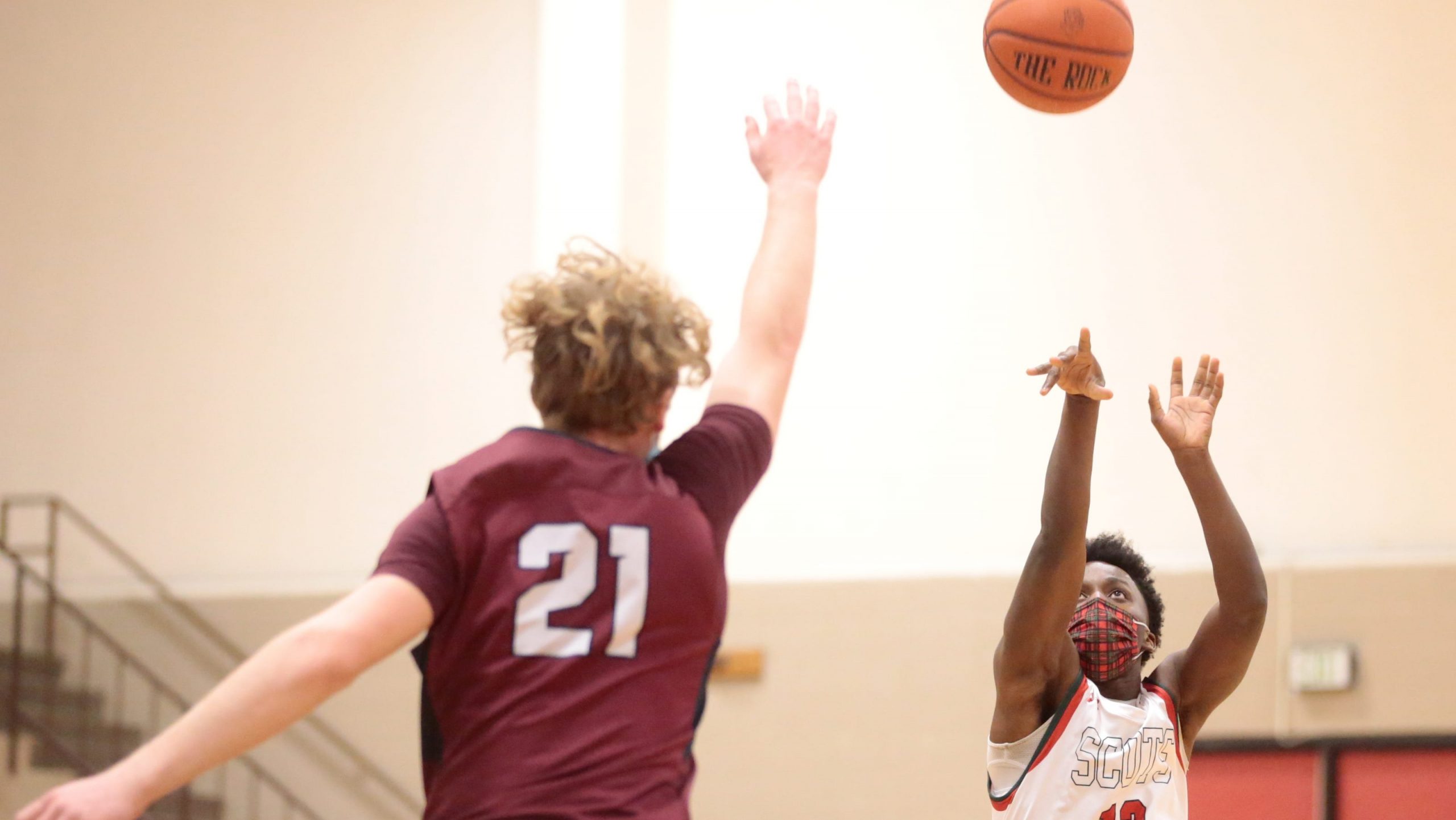 TOPEKA, Kan. – The December version of the Highland Park boys’ basketball might not have come away with a victory last Friday night against Seaman like the February version did.

Trailing most of the second half and all of the fourth quarter, Highland Park found a way on a night where its offense was largely out of sync. CJ Powell sent the game to overtime with a last-second 3-pointer and the Scots dominated the extra period for a 55-47 win.

“The biggest thing is just growth, learning the lessons that you have during the course of any season,” Highland Park coach Michael Williams said. “If you’re not figuring it over time, you’re not doing nothing. Dropping games is one thing, but if you keep learning lessons, get better from it, grow from it, that’s another thing.

“That’s something we’re showing as a group right now and we just have to keep building on it.”

The Scots have now won five straight games to improve to 8-5 overall and 7-3 in Centennial League play heading into Tuesday’s rivalry game with Topeka High.

The Trojans are coming off their own overtime game last Friday, but one that they wish they had over. After leading the entire way, High saw Emporia rally to force overtime and then hold on for a 52-51 win in a wild final few seconds.

The Trojans had a chance to force a double overtime when Jalen Smith was fouled while banking in a half-court 3-pointer at the buzzer. But he couldn’t connect on the free throw and Emporia escaped.

The boys game will follow a girls game between the leader and cellar of the league standings. Topeka High’s girls won their 36th straight game with a 59-42 win at Emporia last Friday. The Trojans are 13-0 overall and 10-0 in league play, while Highland Park fell to 0-10, 0-9 with a 61-33 loss to Seaman.

TOPEKA WEST AT MANHATTAN — After being off last Friday, West’s boys will look to follow up last Tuesday’s huge Centennial League win over Washburn Rural with a tough road trip to Manhattan.

Playing without standout Elijah Brooks against the Indians in late December, the Chargers rolled Manhattan 71-52 as Trevion Alexander erupted for 30 points. West (11-2, 8-1) has won five straight and took over sole possession of the league lead with a 63-46 win over Rural last week.

Manhattan is 3-3 in its last six games, coming off a 59-35 win over Emporia on Saturday after dropping a 58-57 decision to Junction City on Friday.

HAYDEN AT JUNCTION CITY — In the first boys’ meeting between the two in December, Junction City stole a 70-65 overtime win at Hayden. Jake Muller scored 14 for the Wildcats, while Joe Otting and Trent Duffey each added 12.

Hayden’s girls took a 54-41 win over the Blue Jays in their December meeting with Carly Stuke scoring 20. The Wildcats (6-7, 5-5) are coming off a hard-fought 56-54 loss to Washburn Rural last Thursday, while Junction City lost 51- 39 to Manhattan.

WASHBURN RURAL AT SEAMAN — After seeing a chance to take sole possession of the Centennial League lead elude them in last Tuesday’s loss to Topeka West, Rural’s boys bounced back with a 59-45 win over Hayden on Friday behind 16 points from Jack Hutchinson and 15 from Joe Berry.

Rural (9-4, 8-2) needed overtime to beat Seaman in their first meeting, overcoming a scoreless first period to take a .62-57 win with Hutchinson scoring 24. Seaman got 18 from Ty Henry and 14 from Kaeden Bonner in the loss.

The Vikings (6-8, 5-6) are coming off a tough 55-47 overtime loss to Highland Park last Friday, a game Seaman led virtually throughout the second half. Mateo Hyman scored 22 for the Vikings.

Rural’s girls (12-1, 9-1) got a big battle from Hayden last Thursday, pulling out a 56-45 win. Brooklyn DeLeye overcame first-half foul trouble to score 19 points. Rural rolled 51-17 against Seaman in the first meeting this year.

Seaman’s girls (4-8, 4-5) ended a five-game slide with a 61-33 win over Highland Park last Friday. The Vikings were to have played Junction City on Monday night, but the game was postponed to Wednesday because of the weather conditions.

SHAWNEE HEIGHTS AT BASEHOR-LINWOOD — With Heights’ boys team in quarantine, it will be a girls’ only United Kansas Conference affair on Tuesday. The T-Bird girls (4-8, 2-2) are coming off a tough 39-36 loss to DeSoto last Friday.

CAIR PARAVEL AT VERITAS — Both Cair Paravel teams are coming off a sweep of Marais des Cygnes Valley last Friday with the boys cruising 78-20 and the girls taking a 50-21 win. Noah Hastert scored 24 to lead the Lion boys (9-5) and Jaley Barkley had 24 for the Lion girls (5-6).