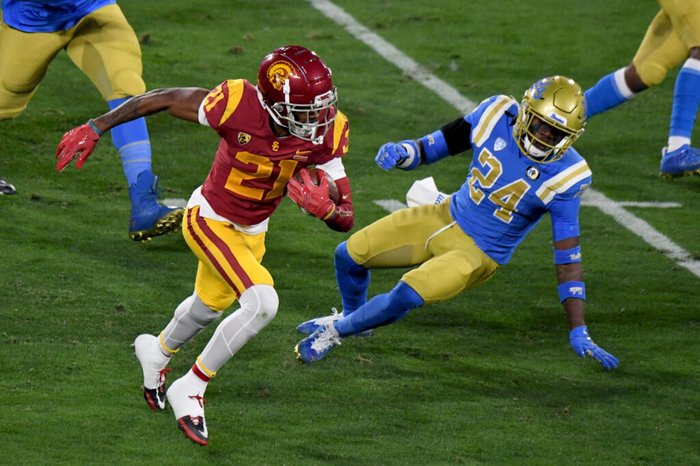 But new Topeka High coach Carlos Kelly, formerly a High assistant, said this year’s Trojans remain motivated to add their names to the school’s recent winning tradition, which includes a 27-6 record and six playoffs wins the past three seasons.

“That’s a big task to try to replace those seniors, but we have a pretty good senior class coming in and they’re hungry and ready to play and ready for the opportunity,’’ Kelly said. ”They’re up for the challenge.

“We have a lot of guys that kind of flew under the radar when you have those big names that were in front of them, but we have a good group of guys coming back.’’

But the Trojan cupboard is far from bare, led by returning All-City Top 11 selection Geivonnii Williams, a senior who will be counted on in a variety of roles this fall.

Williams caught 36 passes for 731 yards and 11 touchdowns in ’19 and could also see action at quarterback this season.

“Geivonnii has really great hands,’’ Kelly said. ”You talk about a natural center-fielder, he can track anything.’’

Alejos started on defense a year ago and is expected to become the Trojans’ feature running back this season after the graduation of Thomas.

Although Kelly knows the Trojans still have a lot of work to do, he said there’s no shortage of motivation.

“Nobody wants to be the group that has a letdown,’’ Kelly said. ”They have a lot of motivation and we have a lot of guys that have just been chomping at the bit to get going.

“It’s their chance. It’s their opportunity to play and they’re thankful they’re here and they want to do everything they can to say they’re part of that winning legacy.’’

Topeka High lost its season opener against Junction City when USD 501 decided to delay the start of the football season for at least a week.

The district is expected to make a decision concerning the remainder of the season this week, but Kelly said his team is preparing to play.

TROJANS AT A GLANCE