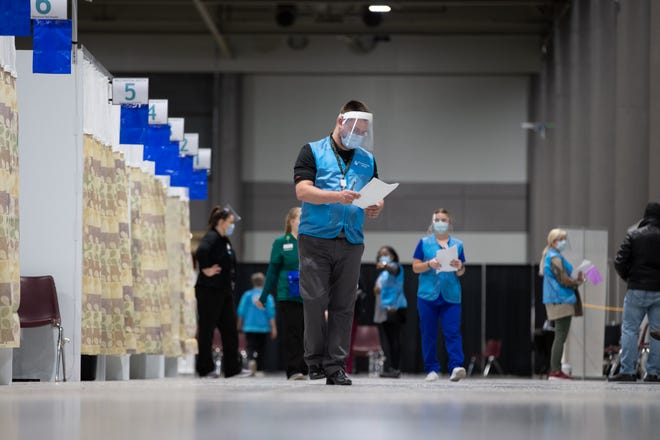 TOPEKA, Kan. – As counties across Kansas are ramping up to carry out Phase 2 of the state’s COVID-19 vaccination plan, Osage County is tracking things the old-fashioned way.

With residents age 65 and older, as well as essential workers, now eligible for the vaccine, phones are ringing off the hook in the county of 17,000 residents south of Topeka.

One of the county’s five staff members fielded over 100 calls in just one hour from residents seeking a vaccine appointment, and county health administrator Jackie Patterson said that has been a normal volume in recent days.

Those eligible for the vaccine are added to a list and will be summoned when enough doses arrive for them to be vaccinated.

But when residents want to know where they fall in the pecking order, staff members can’t check — the list is kept by pen and paper.

“We don’t have an electronic health record,” Patterson said. “I know it sounds crazy, but we don’t have that capability right now.”

The decentralized public health system in Kansas means Phase 2 vaccine distribution looks different depending on where you are in the state.

That is because state officials are letting county public health departments take the lead in doling out the doses. Different areas have moved into Phase 2 at different times.

Some counties, such as Shawnee County, haven’t finished vaccinating all health care workers. Stormont Vail in Topeka didn’t administer a single dose of a COVID-19 vaccine between Jan. 16-Jan. 25 due to a shortage of supply, according to the hospital’s daily COVID-19 update.

Other areas have dived in headfirst.

“A lot (of counties) were ready to go before last Thursday, especially the rural ones,” said Dennis Kriesel, executive director of the Kansas Association of Local Health Departments.

That process hasn’t been without some growing pains, given limited vaccine supply. State and county officials have stressed that things will be slow going until more doses arrive from the federal government.

“We’ve been getting everything we ordered but there is no way on the planet that that is enough vaccine,” Lee Norman, secretary of health and environment told legislators Tuesday.

State officials are hoping that the number of doses Kansas is getting from the federal government will tick upwards under President Joe Biden’s administration, which announced last week that he would invoke the Defense Production Act in an effort to churn out more doses.

But for now, the state is receiving far fewer doses than it would need to quickly tackle the estimated 1 million Kansans who qualify as part of Phase 2.

Smaller counties, like Osage County, are only getting 100 doses per week in the coming weeks, with appeals to KDHE for more vaccine proving fruitless.

Shawnee County is set to receive 1,950 doses a week for the foreseeable future, county officials expect, and there are 30,000 people who have applied to get shots. This has frustrated residents, who want their shots and worry it could take months to get through the backlog.

High demand and low supply caused long lines in Florida and other southern states, with residents waiting for hours in their quest to get a vaccine, and Kansas counties are seeking to avoid that example.

Many, like Osage County, have opted to have residents fill out a form online or call in to put their name on a waiting list, with the county health department reaching out to schedule an appointment when a resident’s turn comes up.

Some have found this to be a more straightforward process than others. In Douglas County, for instance, slots filled up like seats at a rock show, with 500 available spots disappearing in a matter of minutes.

Riley County had to cope with a flood of people who came out to get their shots on Thursday, the first day Phase 2 vaccinations began in the state.

While county healthy officials said they initially believed they had plans in place to get residents in and out quickly, lines soon formed and traffic was snarled as some with appointments were turned away.

“It is important to remember that this is new for all of us,” the health department said in a subsequent statement. “We are already discussing ways to ensure the next clinic goes more smoothly and are actively working on purchasing and implementing a scheduling system that will allow us to stick to a tighter schedule with few exceptions.”

State officials are giving their counterparts at the county level flexibility in determining who gets their shots when, and it appears local health departments are planning on taking it.

Three-quarters of health departments surveyed say they will put some groups before others in Phase 2, according to data from the Kansas Association of Local Health Departments.

For some counties, that means putting essential workers at the front of the line, whereas in others that top priority will go to seniors or even school and child-care workers.

Residents who are staring down a long wait in their county of residence can attempt to get their shots in another county, although officials say there haven’t been many who have tried this tactic thus far.

Kriesel acknowledged there may be a minority of residents who attempt to play the odds by putting themselves on the waiting list in several counties but health workers may not be aware of the practice.

KDHE has said it is important flexibility to give those who live in one county and work in another and are looking to get their shot.

With limited doses available, Kriesel said, it was a moot point for the time being.

“We just don’t have enough vaccine versus the number of people who are eligible … so for the time being I think it would be hard for there to be a major run,” he said.

While the state has said that more vaccine distribution sites are being added to the 100 currently in use, residents aren’t at the point yet where they can cruise up to a pharmacy and get their shot. Norman told legislators Tuesday that he hoped more pharmacies would come on board to give out the vaccine.

“That will really be a godsend,” he said.

KDHE is in the process of finalizing a dashboard showing residents where they can get vaccinated and how to make an appointment, but it isn’t yet finalized and officials haven’t given a timeline for when it might go live.

For now the work will continue to fall to local health departments, something Patterson said they are taking in stride, despite the mountain of phone calls, emails and anxious residents.

“We prepare for this and train for it — we have for years,” she said. “We have books written on it and we drill on it. I think we are getting along pretty well. This is obviously a different type of situation, unique in many ways. But for the most part, our little health departments have been chugging along pretty good.”