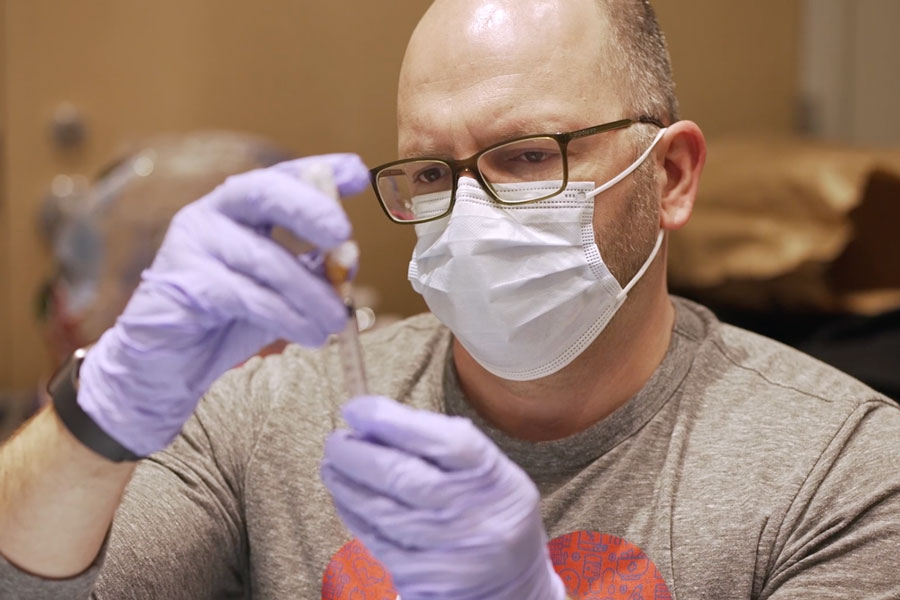 Locke said that while Kansas in general has prioritized teachers in Phase 2 of the vaccine’s rollout, counties are given leeway within each of those phases to prioritize subgroups, and the Shawnee County Health Department has recently decided to bump K-12 staff up to the top of Phase 2 starting next week.

“We have really highly prioritized K-12 staff, understanding the pressures schools are under and that we all have the goal of having children back in school,” Locke said.

Further, the department is setting a goal of administering at least the first dose of the vaccine to every Shawnee County K-12 teacher by spring break, giving the department about a month to vaccinate teachers.

According to data from the Kansas State Department of Education, Shawnee County schools employ about 2,600 certified staff, a figure that includes licensed school personnel such as principals, reading specialists and other specialized positions. More than 2,000 of those certified staff are teachers who work directly with students in classrooms, however.

An additional 1,600 workers are noncertified staff, meaning such positions as custodians, paraprofessionals and bus drivers.

Locke said at a Thursday afternoon news conference the department is able to give higher priority to school staffs, while not deprioritizing those 65 years and older, because of a federal allocation that will bring 1,400 doses of vaccine. Those doses would be in addition to the 1,950 weekly doses the county receives from the state.

The Centers for Disease Control and Prevention last week announced that teacher vaccinations aren’t a prerequisite for reopening schools and that existing COVID-19 mitigation measures, such as social distancing and mask enforcement, have been largely successful at stopping the spread of COVID-19 in schools. Evidence suggests children rarely spread the virus in those tightly controlled spaces.

Still, if not a sticking point for reopening, teachers have seen vaccines as key to their safety, as COVID-19 has had much worse health effects in adults.

The Topeka chapter of the National Education Association teachers union has been working closely with both Topeka Unified School District 501 and the health department to try to get vaccines to teachers, said Brenda Blackman, secretary for the chapter and a special education teacher at Robinson Middle School.

In addition to her posts with the district and union, Blackman has been working part-time with the Shawnee County Health Department as an information specialist and case investigator.

She said teachers are understandably concerned with returning to rooms that may be poorly ventilated or cramped, especially if districts start bringing in more students for full-time, in-person learning.

“I think people are anxious and nervous being in their classrooms, and as their local association, I think NEA Topeka is in 100% agreement with (superintendent Tiffany) Anderson and the district and school board that vaccinating our teachers should be a high priority for us,” Blackman said.

Still, schools have done a great job at keeping COVID-19 from spreading in classrooms, Blackman said.

“While it’s very scary for people to think that during a pandemic of a communicable disease like COVID we’re going back to the classrooms,” she said, “I also think it’s something to be celebrated that we’re doing a really good job.

“Our staff are juggling a lot already in their personal lives with COVID, and top of that, they’re managing to completely rethink the way they teach students and learn new technology on the fly … and they’re being incredibly mindful of COVID protocols.”

Seaman USD 345 superintendent Steve Noble said only one other piece of news has been better for him since March 2020, and that was when he heard his mother had finally received her second dose of the vaccine a few weeks ago.

“It’s a gamechanger for all of us in education,” he said. “Our goal has always been to get our kids back on site as safely and as soon as possible … We’ve begun planning and discussions to do exactly that. This news today was like manna from heaven for us, and it will help us realize that goal and dream of getting all of our kids back on site safely, and we’re thrilled with the efforts of the Shawnee County Health Department and KDHE.”

About 60% of Kansas school districts have reported that their staff have begun receiving the vaccine, health officials said earlier in the week, although it isn’t clear if that figure takes into account school nurses and other school health personnel. Like school staff who have already received the vaccine because of membership in another priority group, nurses and school health personnel have been among the first Kansans to receive the vaccine.

At a district like Seaman, Noble said, Thursday’s health department announcement may not necessarily speed up the district’s overall timeline of trying to bring middle and high school students to full-time, in-person learning.

In any case, he said, districts like Seaman are now rushing to figure out logistics to get teachers vaccinated in the next three weeks. Internally, Seaman will develop a priority list for teachers who might be at higher risk of infection to receive the vaccine first.

“It’s just a great day,” Noble said. “It’s brought tears of joy to people I’ve seen today and talked to. It’s that big of a relief for us, and that’s how big this news is. We’re living in history.”

Before Thursday’s meeting, Shawnee County school boards had expressed a level of frustration with the health department’s lack of information and communications on the teacher vaccinations. Some districts have explored potentially being vaccination sites and to have district health employees administer the vaccines themselves.

The health department itself, however, hasn’t been able to share much information because it often is also asking questions of higher agencies or of the federal government to try to nail down vaccine allocation numbers and timelines for distributions.

“I think what we’re seeing is people just generally frustrated because they’re not getting answers, but the health department also doesn’t have answers, so it’s become like a Catch-22 — nobody has an answer and everyone is just frustrated,” Blackman said.