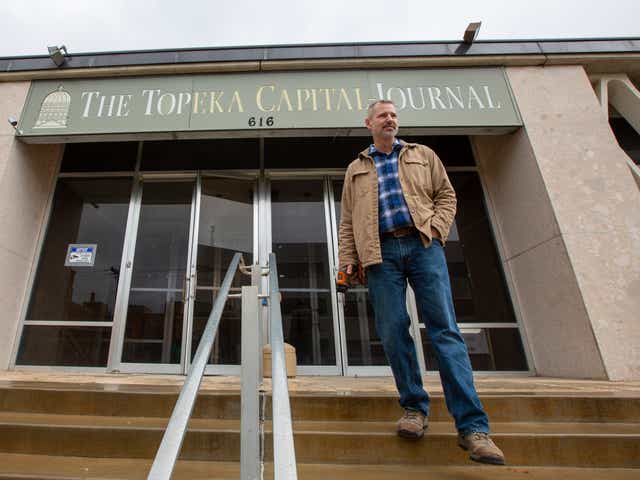 TOPEKA, Kan. – Less than six months after the opening of downtown’s Topeka Vendors Market, Todd Konkel, owner of the market and its adjacent properties, announced he has purchased more real estate nearby.

The Pottawatomie County resident began investing in the downtown Topeka area in late 2019, buying up a block of six buildings on S.E. Adams Street. This month, he announced he has made another investment, purchasing the former Topeka Capital-Journal building, at 616 S.E. Jefferson.

And those properties are expected to be part of a downtown entertainment district he is in the process of developing.

“I really wanted to do something that was cool and wasn’t just purely a financial real estate deal but … brought something to the community and added to quality of life,” Konkel said. “What really got me interested in the downtown area was the development that’s been going on.”

That development led him to create a downtown vendors market inspired by Kansas City’s Historic West Bottoms district. That local market — called the Topeka Vendors Market — opened in October and has grown from a couple of dozen vendors to more than 75.

“We have two floors (of vendors) now,” Konkel said.

And he indicated such interest has grown pretty organically.

“They come in to shop and then decide to get a space or they’re friends of other vendors,” he said. “We’re getting more and more traction and traffic every week.”

By summer 2021, he expects to open an indoor food-truck court a couple of buildings down from the market. He said Bobby Santacroce, owner of Big Boyz BBQ, will run that space.

That Adams Street block will also eventually house an event venue, some office space and possibly a distillery or eatery.

Entertainment district on the horizon

But the big news lately has been Konkel’s purchase of the old Topeka Capital-Journal building, which sits diagonally to the vendors market.

The Capital-Journal operated out of that building for more than 50 years, as evidenced by the three-story printing press, a pile of red newspaper vending machines and various article clippings still present on the property.

The building has sat vacant since late 2018, when The Capital-Journal relocated to Kansan Towers, 100 S.E. 9th St.

And that’s where Konkel comes in.

Konkel said he started looking at the property because of its proximity to the Adams Street buildings he already owned.

“I love the idea of taking older buildings and adapting them for new use,” he said, “bringing out their historic character but doing something fun and interesting.”

Konkel closed on The Capital-Journal building about four months ago, paying $500,000 for the space — a bargain compared to its $670,000 appraisal value.

To date, Konkel estimates he has invested close to $1.5 million in the Adams and Jefferson street properties.

But he doesn’t plan to stop there, as the goal is to create a vibrant arts and entertainment district that draws people to the area.

When it comes to rehabbing the former Capital-Journal building, Konkel has a lot of space to work with. The building is upward of 112,000 square feet — almost 20,000 square feet more than all six of his Adams Street properties.

“Basically, that’s like (the Topeka Performing Arts Center) and city hall together. It’s a building that takes a whole block,” said Karen Lane Christilles, Konkel’s communications representative for the project.

With $1.5 million already invested, Konkel said many of the big expenses have yet to come.

“The real big spend is when we really start the heavy construction,” he said.

Konkel’s plans for the old Capital-Journal building include tearing down interior walls on the main floor to create a locally sourced grocery store and kitchen concept. And he met with someone Monday who may be interested in serving food and drinks in that area, as well as on the mezzanine that overlooks a warehouse space at the back of the building.

In that warehouse, Konkel envisions drawing pickleball courts, and he indicated there may be opportunities to open the overhead warehouse doors — or even build a balcony just outside one of the doors — to produce a more open-air concept. The grassy area outside those doors, he added, may lend itself to outdoor activities.

Also on the main floor, Konkel would like to use about 15,000-square-feet for a fitness center of some sort, though he is open to working with a potential tenant to fulfill their vision.

The building’s three-story printing press presents a unique challenge — but also an opportunity, as its removal would leave a multi-level gap in the middle of the structure.

“When we get these out, you’ve got a three-story big, wide-open space,” Konkel said.

And he thinks it would be perfect for a indoor rock-climbing wall.

On the basement level of the building, Konkel would like to open a small bar area with pool tables and dart boards, as there is an existing kitchen and cafeteria that could be reworked to fit such a business.

A bigger area on that floor may house laser tag, and he is already in talks with a man who is interested in standing that up.

“He’s pretty serious about doing that,” Konkel said, “so it’s just getting all the details worked out.”

On the third floor of the building, there is a good bit of office space. Other than renovating the space to make it more modern, Konkel doesn’t plan to change much there. Once it is updated, he hopes to bring in new tenants.

“They’re kind of nice office spaces actually. They all have good windows and good lighting, so hopefully, we’ll find someone,” he said.

Konkel doesn’t have a firm timeline yet for when all those renovations may occur. The first step is cleaning up the building and properly disposing of old records and equipment left behind by the former occupants.

“We’re going to get the clean-out done … and I’m having renderings and stuff done right now,” Konkel said.

His Adams Street project is moving along quicker than expected, though, and transformations to The Capital-Journal building could follow suit.

“It really kind of depends on how quickly we get people who are interested in leasing space and whatnot,” Konkel said. “I really want to focus on that warehouse piece. I think that could be a really cool spot, which would be a draw. That and the laser tag.

“But it just depends. Hopefully, sooner rather than later. We’re definitely going to push forward.”

And to top it all off, they may decorate the outside of the tan, brick building with murals to add a pop of color to the block.

“It’ll be interesting to bring it back to life,” Konkel said.