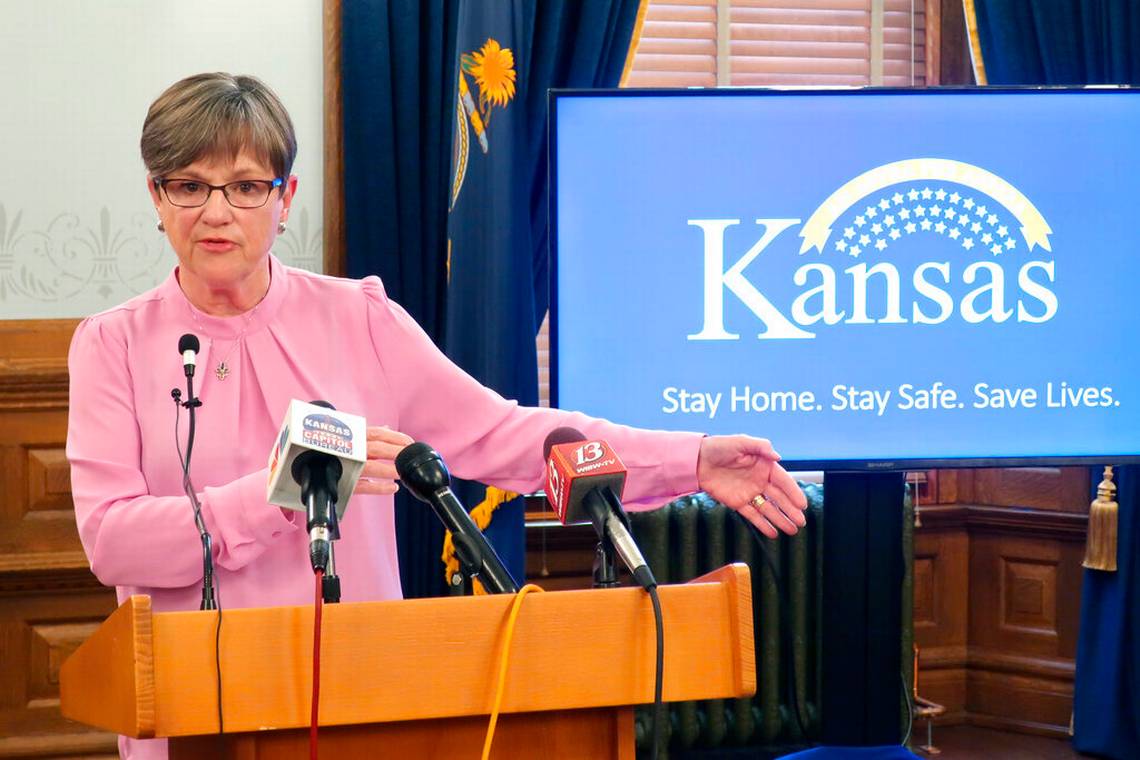 TOPEKA, Kan. — Gov. Laura Kelly grew concerned in February about the impact COVID-19 could have on Kansas.

By early March, the looming crisis became obvious. She pulled together key members of her administration to gather data, listen to experts and consider the potential ramifications of the novel coronavirus.

“It was clear to me in the role as governor that it was my responsibility to get all over this and take an all-hands-on-deck approach,” Kelly said. “We knew this was serious, and we knew this was going to get more serious.”

The governor talked about her handling of the pandemic during an episode of The Topeka Capital-Journal’s Capitol Insider podcast, which was recorded before she signed an executive order Saturday that directed the entire state’s population to stay at home except for absolute necessities.

House and Senate leaders of both political parties met Sunday to review the Democratic governor’s statewide order, and adjourned without taking action. The gathering of the Legislative Coordinating Council, which has a 5-2 Republican majority, was hastily called after Kelly widened the stay-at-home policy that county officials had imposed on about two-thirds of the state’s population.

“If we have any chance of reducing the impact, minimizing the spread of this virus … I believe [the stay-at-home order] is the best thing we can do at this particular point,” said Maj. Gen. Lee Tafanelli, adjutant general of the Kansas National Guard.

*One Douglas and two Crawford county cases tested positive in reference labs that haven’t been reviewed by KDHE.

“The cases are still growing over 20%,” Denning said. “So, that means they’ll double every four to five days. I think what the governor is doing here makes perfect sense.”

Meanwhile, a former executive director of the Kansas Republican Party urged the LCC to rebuff Kelly because the governor overreacted to what “smells more and more like a contrived ‘crisis.’ ”

COVID-19 has killed six Kansans and infected more than 319 — numbers that have escalated dramatically in the past week. Testing revealed infected Kansans in 35 of 105 counties. The age range of patients is 4 to 95, with the median age at 56. The gender split: female, 156; male, 163.

Kelly’s stay-at-home order was the latest in a series of escalating directives aimed at limiting the spread of the virus and protecting residents caught in the economic fallout. Kelly closed schools, blocked utility shutoffs, banned foreclosures and evictions, limited public gatherings, delayed the deadline for paying taxes, expanded telemedicine and eased regulations on truckers.

The Democratic governor’s decisive actions haven’t always been appreciated by some of her Republican adversaries. As the crisis unfolded two weeks ago, lawmakers moved to restrict Kelly’s powers during a state of emergency.

Sen. Ty Masterson, R-Andover, was among 10 Republican senators who voted against a budget bill that delivered $65 million in immediate aid for dealing with the coronavirus.

Masterson said he was disappointed in criticism directed at him by Senate Minority Leader Anthony Hensley, a Democrat from Topeka who proposed lawmakers unwilling to support the bill during a public health crisis were unfit for public office.

“Skyrocketing unemployment and a complete economic shutdown in many sectors of our economy will drastically reduce revenues coming into the state coffers,” Masterson said. “The Legislature needed to not only direct funds to combat the COVID-19 emergency response but should have done so while also passing a fiscally responsible budget to ensure that needed state services are not disrupted and our ability to respond to the crisis is not stymied because of bloated, non-essential spending.”

“We have a duty to carefully assess this executive order and the reasons for it,” they said. “Over the coming days we will consult with the attorney general, health care professionals, the business community and the state’s emergency management team to make sure we are on the right path.”

Ryckman said Sunday the LCC has a duty to review the governor’s executive orders, and “we owe it to our business community and to our workforce to review this order as timely as possible.”

Clay Britton, the governor’s chief counsel, fielded questions from Ryckman and Hawkins about the implication of the statewide stay-at-home order. The order replaces the ones issued by county-level health officials, regardless of whether they are more or less restrictive, Britton said.

He also clarified for legislators that the order doesn’t violate religious freedoms or gun rights.

The Kansas Chamber, the state’s most politically potent business organization, endorsed Kelly’s statewide order because it would clarify expectations of companies with operations spread over multiple counties.

Alan Cobb, president of the Kansas Chamber, said the organization worked closely with the governor’s office to help develop a more uniform approach that prioritizes the health and well-being of Kansans while also allowing essential commerce to continue across the state.

The governor’s approach stands in contrast with President Donald Trump, who initially downplayed the threat of the coronavirus and more recently expressed hope it would all be over by Easter. By virtually all other estimates, the crisis will last more than a couple of weeks.

During Saturday’s news conference about the stay-at-home order, Kelly said she intends to ignore federal guidelines that don’t reflect the seriousness of the situation in Kansas. Her order will be initiated at 12:01 a.m. Monday.

Without mentioning the president by name during the podcast conversation, Kelly addressed the “more than muddled” messages coming from Washington, D.C.

“When you’re saying one thing and the facts and data say another, it actually borders on dangerous to folks,” Kelly said. “You’re not helping them by not being honest about what the situation is and what they need to do to protect themselves.”

After Kelly announced the order, former Kansas Republican Party executive director Kris Van Meteren took to Facebook to denounced the governor’s approach. Several Republicans in the Kansas Legislature likewise have asserted the governor was panicked into closing schools, limiting gatherings of people to 10, blocking foreclosures and evictions and, on Saturday, expanding the stay-at-home order to all 105 counties in Kansas.

Van Meteren, who operates a prominent political direct-mail and consulting business catering to conservatives, said the statewide directive was unconstitutional and ought to be overturned by the LCC. He called on GOP lawmakers to reverse the governor’s latest order.

“Are you going to let this authoritarianism, which isn’t remotely constitutional or justified by the facts on the ground, stand unchallenged?” Van Meteren wrote. “Power seized like this will never be surrendered. We elected you to make our laws, not this little wannabe tin-cup dictator. Time to do your jobs, stop cowering in the corner, and serve as the check on power grabs you were intended to be.”

He said there had been “but four deaths in this state from this bug to date — FOUR! You’re allowing this leftist governor to kill our economy, and thus the tax revenues y’all love to spend. You going to stand by helplessly and watch this happen?” Van Meteren said.

Hensley, the Senate Democratic leader, said Van Meteren’s attempt to minimize the tragedy of illness and death resulting from COVID-19 “was absolutely outrageous and totally irresponsible.”

Van Meteren also said he wouldn’t comply with Kelly’s reinforcement of county orders to limit activities outside the home to essential occupations, obtaining medicines and health care and purchasing food and other supplies. He invited the Kansas Highway Patrol to respond to his rejection of the order so there was standing to file a lawsuit.