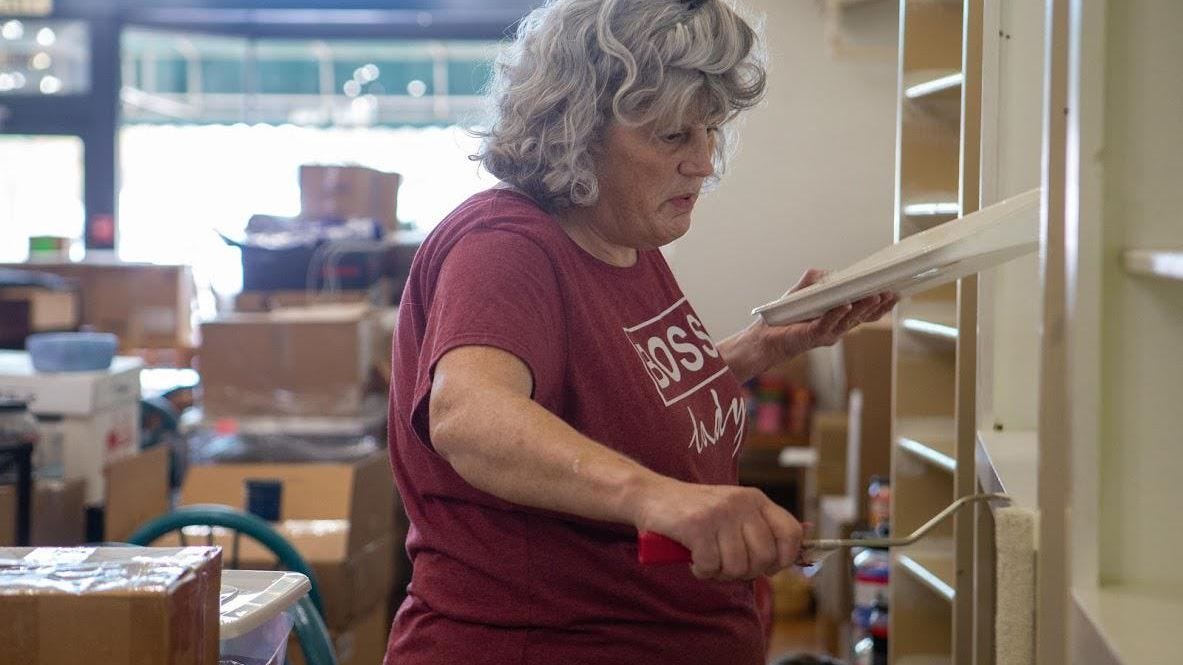 She posted on Facebook, reached out to community members, looked at another potential spot, and eventually, her banker suggested she consider the historic GEM Building near the corner of 10th Street and Topeka Boulevard.

“I came over and looked at it, and I saw a lot of potential with the space, even though it’s half the size (of the former location),” Ledbetter said. “I just have that feeling that this is the right place.”

Around Oct. 20, Ledbetter and her staff, with the help of Techno Movers, began transferring Prairie Glass inventory and furniture from the old location to the new one, at 506 S.W. 10th Ave.

She said her crew, consisting of five part-time employees, has been great. And members of the community really stepped up, as well.

After using those donated supplies to safely transport items, the Prairie Glass team has spent the past week painting their new space, unpacking boxes and preparing to officially open to the public. Ledbetter said she plans to open at the new location on Nov. 6.

According to Ledbetter, her new landlord, Tyler Johnson, “bent over backwards” to make the quick turnaround possible.

“Everything Tyler says he’s going to do he does,” Ledbetter said, “and that is just absolutely the best kind of landlord.”

Johnson helped them get rid of two interior offices that interrupted the now open floor plan. He helped them organize installation of the appropriate electrical wiring for Prairie Glass’ kilns. And he also suggested Ledbetter put a big vinyl sign on the side of the building to announce Prairie Glass’ opening.

Johnson said he is happy to have Prairie Glass occupy the space.

Johnson and his wife, Michelle Butler, are the first people not related to the original owners to take over the building. Johnson said he and his wife are big supporters of the arts, and they appreciate the work Ledbetter does.

“When we originally talked with (Ledbetter), I told her that I wanted to see if we could make this work for her specifically,” Johnson said, “because I feel like what she does is good for our community. We need to have more of her type, more arts.”

Before Prairie Glass moved in, the space had been empty for about a year-and-a-half. Johnson said he thinks the original owners would be proud to know the property now houses a local small business.

“The previous owner had tried to make that into some sort of office space, and I really felt like it needed to be retail or some sort of event space,” Johnson said. “I think that’s what we have.

“I love this part of real estate,” he added. “We’ve all had to come together to make this work. … I just know that Jan Leuenberger (previous building owner and grandson of the original owner) is up in heaven right now looking down with a smile upon his face, because this is what he always wanted. He always wanted to have a storefront in there that was vibrant and really brought that space to life.”

According to Ledbetter, the new space offers about 2,700-square-feet, compared to the 5,000-square-feet her shop occupied in the Thacher building.

“But it’s arranged totally differently,” she said, “so it’s just learning how to make the best use of the space.”

The front of the shop will be dedicated to retail. A standing, reception-style desk in the middle of the shop, to the left of the entrance will serve as the register. And the back half of the space will feature four long tables for Prairie Glass to host glass-making workshops. Ledbetter said there is also a basement in the building that Prairie Glass can use to store excess furniture or out-of-season ornaments.

But she also noted the move hasn’t been free of struggles.

“A big struggle is the cost (of the move),” Ledbetter said. “We had a big sale and customers really came out and supported us with that, but it’s still going to be a struggle to make it work the first year that we’re here.”

Before the news came in September that Prairie Glass would have to move, the business had been struggling financially during the coronavirus pandemic, as Ledbetter had to stop offering the group classes that have become a big part of the shop’s business model.

She said the setup of the new space should allow classes to start back up, but she plans to limit class sizes to no more than about 12 people. And she and one of her employees, Cathy Thompson, plan to teach the classes so they don’t have to call on volunteers who might not be comfortable leading lessons during the pandemic.

According to Ledbetter, the big move has been a blessing in disguise. She said in recent months she had been questioning whether to continue operating the shop. The move has provided some perspective, including letting her know how many community members want Prairie Glass around.

“It was actually the kick in the pants that I need sometimes,” Ledbetter said. “I’m glad that this happened and that everyone helped because I know now that we’re supposed to be here.”

Over the next month or two, Ledbetter and her team will be working to build their inventory back up, especially as they enter the holiday season.

Once Prairie Glass reopens, they will operate according to their holiday hours, Ledbetter said. She plans to be open 10 a.m. to 5:30 p.m. Monday through Friday and 9:30 a.m. to 4 p.m. on Saturday.

And Ledbetter is ready to hit the ground running.

“We’ll be stocked again by Thanksgiving weekend,” she said. “We’ll definitely be here for (Small Business Saturday). … Through this COVID time, we want to work with our customers so we can still get them what they need in a safe way. All they have to do is reach out.”