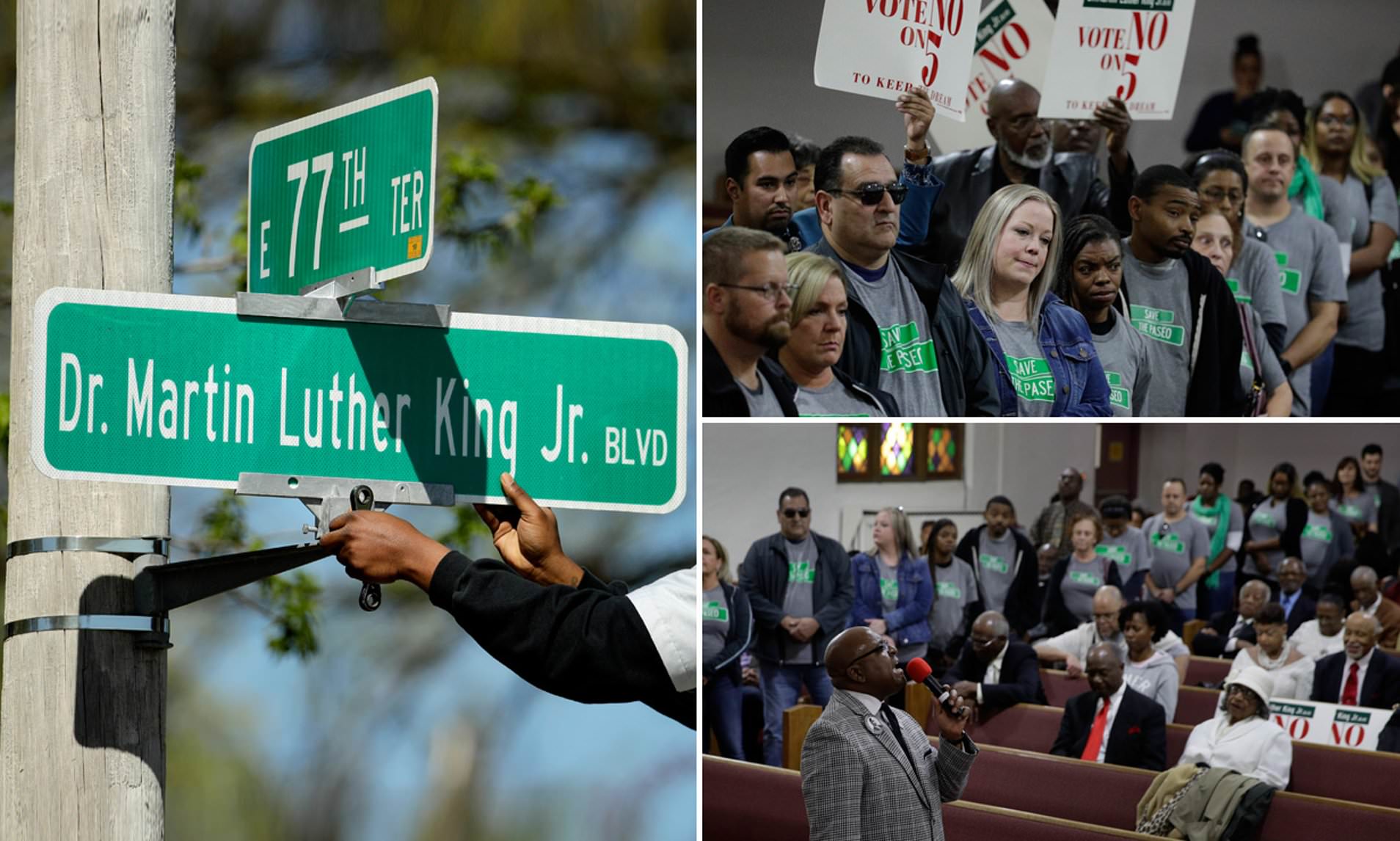 Kansas – Martin Luther King’s name will be removed from one of Kansas City’s historic boulevards, less than a year after the city council renamed it after the civil rights icon.

The 10-mile The Paseo on the city’s mostly black east side was renamed by council officials to Martin Luther King Jr Boulevard in January, sparking fierce debate in the city.

Civil rights leaders who pushed for the change celebrated when the street signs went up, believing they had finally won a decades-long battle to honor Mr King.

The move appeared to end Kansas City’s reputation as one of the largest US cities in the country without a street named after him.

Martin Luther King’s name will be removed from one of Kansas City’s historic boulevards, less than a year after the city council renamed it after the civil rights icon. A picture above shows a public works employee changing the street sign from The Paseo to Dr. Martin Luther King Jr. Blvd in April

People wearing Save The Paseo shirts stand among attendees at a rally to keep a street named in honour of Dr Martin Luther King. Supporters of The Paseo name say city leaders pushed the name change through without following proper procedures

But a group of residents intent on keeping The Paseo name began collecting petitions to put the name change to a vote and achieved that goal in April.

The campaign has been divisive, with supporters of Mr King’s name accusing opponents of being racist.

Supporters of The Paseo name say city leaders pushed the name change through without following proper procedures and ignored The Paseo’s historic value.

They also said The Paseo is an historic name for the city’s first boulevard, which was completed in 1899. The north end of the boulevard is listed on the National Register of Historic Places.

Unofficial results from the vote showed the proposal to remove Mr King’s name received nearly 70% of the vote, with just over 30% voting to retain King’s name.

The Reverend Vernon Howard, president of the Kansas City chapter of the Southern Christian Leadership Conference, said the King street sign is a powerful symbol for everyone but particularly for black children.

‘I think that only if you are a black child growing up in the inner city lacking the kind of resources, lacking the kinds of images and models for mentoring, modelling, vocation and career, can you actually understand what that name on that sign can mean to a child in this community,’ he said.

If the sign were taken down, ‘the reverse will be true,’ he added.

‘What people will wonder in their minds and hearts is why and how something so good, uplifting and edifying, how can something like that be taken away?.’

But Diane Euston, a leader of the Save the Paseo group, said that The Paseo ‘doesn’t just mean something to one community in Kansas City.’