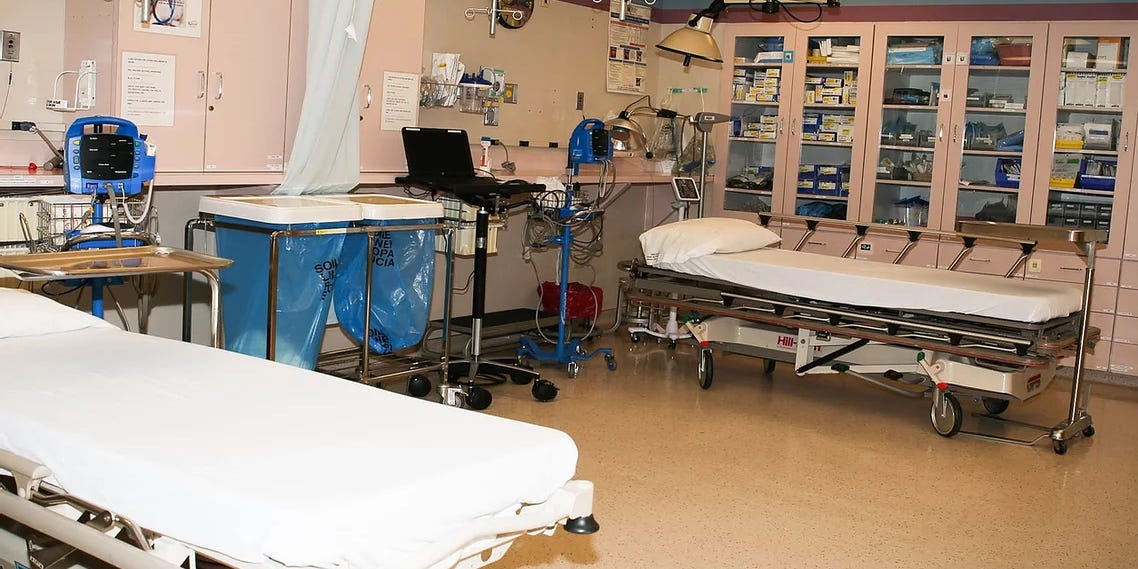 Kansas – In 2019, northwest Kansas-based Decatur Health was staring into the possibility of shutting its doors.

“It got really bad, where we were not sure how we were going to financially be able to make it out through the month,” said Chief Operations Officer Kristopher Mathews. “I think we were down to double digits of cash, like 10 days of cash on hand.”

Like many small rural hospitals, it was financially struggling. Recent studies show around 75 rural hospitals in Kansas are operating at a financial loss and in danger of closing.

Desperate, Mathews became one of the first to look into a new model developed by the Kansas Hospital Association. It’s situations like his that spurred KHA in 2012 to begin researching a new, more sustainable way of delivering services in rural areas.

What does this model do?

A primary health center, to describe it simply, is a hybrid between a clinic and a hospital.

Like a normal hospital, it’s open 24/7 and provides emergency services. But similar to a clinic, there are no overnight stays and primary care is offered.

“We have eliminated that inpatient bed or those overnight stays. Those really aren’t being utilized in a number of our communities today,” said Jennifer Findley, vice president of education and special projects for KHA. “Instead, we’re replacing it with a focus on primary care and preventive care, really putting our energy around making people more healthy, so that they don’t need those overnight stays in the hospital.”

A huge driver in costs for rural hospitals has been that rural populations have been become not only more uninsured and older, but also smaller.

“In rural America, having so few patients, you don’t get a lot of opportunities to bring cash in the door,” said Mathews.

According to KHA, 37 hospitals have fewer than two patients any given day spending the night in the facility.

Not having enough patient volume might mean not being able to pay fixed costs when it comes to running a hospital, from equipment to utilities. Mathews compared it to rural schools, with large buildings yet fewer students, who might find it more sensible to send them to other larger schools.

So by getting rid of inpatient services, the fixed costs supporting them are reduced and the remaining services are easier to sustain.

“Many of the common procedures that we deliver in our small rural hospitals today do not require an overnight stay. Technology has enabled us to do things quicker and easier than it did 20, 30 years ago,” said Findley.

She used the example of a cataract surgery, a 10-minute procedure that used to be hours long and would require a hospital stay. Therefore, many hospitals right now have inpatient beds, of which many aren’t used.

What if a rural Kansan does need acute inpatient services? The rural emergency hospital would transfer that patient to a more full-service hospital, highlighting how crucial transportation systems will be to this model.

Under the rules, only critical access hospitals and hospitals with no more than 50 beds can become an REH. Ninety-one hospitals in Kansas would be eligible.

The elimination of acute inpatient services makes possible a more sustainable funding mechanism from the government.

“The risk for the government is going to be lower by not having that inpatient volume there,” said Mathews.

Under current reimbursement processes for critical access hospitals, there is an interim rate for every fee for service. At the year’s end, everything needs to be settled up, kind of like “have you paid enough taxes in for the year or not,” said Mathews.

With the new model, funding seems to be more secure with a determined budget. According to a briefing from the American Hospital Association, REHs will receive a fixed monthly payment plus an add-on for outpatient services.

That would erase worries from rural hospitals having to worry about cash flow and whether there are enough patients; plus, salaries and other expenses could be paid on time, said Mathews.

However, many of the finer details of how rural emergency hospitals will be funded are still unclear at the moment.

For communities looking at transitioning to a rural emergency hospital, potential grants and money sources may be taken advantage of to set it up. A Kansas House bill establishing the Rural Hospital Innovation Grant Program, for example, could help lay the groundwork.

“We still believe that with expanded Medicaid, more people would have access to coverage, which in turn would help this type of hospital just like it helps the current critical access hospital,” said Cindy Samuelson, spokeswoman for KHA. “The number of uninsured in our rural areas is increasing, so making available to them coverage is always helpful to the situation.”

The state hospital association has maintained communication with Kansas lawmakers on this new model since it first began researching it. The group doesn’t think legislators will be against it.

“We have not seen a lot of pushback,” said Findley. “I think most folks understand how important it is to preserve access to care in rural areas.”

The bigger hurdle to overcome will be persuading regular Kansans in the community to embrace a primary health center model.

For one, they’re not advocating every single hospital turn into a rural emergency hospital, KHA emphasized. Also, the legislation allows facilities to revert back to being a critical access hospital if it doesn’t work out.

“As you know, change is scary and difficult. And I think this just provides an extra layer of security for folks, that it’s OK to try something new,” said Findley.

Even then, there will still be concerns. Mathews said when his community engaged with this topic, the idea that there would be no inpatient services scared people. Some were uncomfortable with the idea of their doctor not being able to admit them to their hometown hospital. Some worried about their insurance not working with other nearby hospitals they might have to go to instead.

“What we were trying to portray is that the government’s made it very difficult to qualify someone to meet that acute inpatient status,” he said. “No longer are the days where we admit somebody today and then we discharge them tomorrow. You have to be … sick enough to be here at least two midnights. Us giving up an acute inpatient stay is not as detrimental as it once was.”

In addition, there would still be a limited form of inpatient care allowed under an REH model with swing beds, in which one can come into the hospital after a surgery elsewhere to rehabilitate.

More than 75% of patients that use small, rural facilities would continue to be served by rural emergency hospitals, according to KHA research.

In short, health care is a complicated topic that requires extensive engagement and conversations with community members, many have said. The hospital association hopes that when the pandemic lifts, they can begin taking their regional conversations about REHs from remote to in-person.

“If that’s a basis for our government to give us sustainability, then that is something that is way more important to me than to hope and pray that we have enough volume year over year to survive … and end up closing the doors and losing everything,” he said.