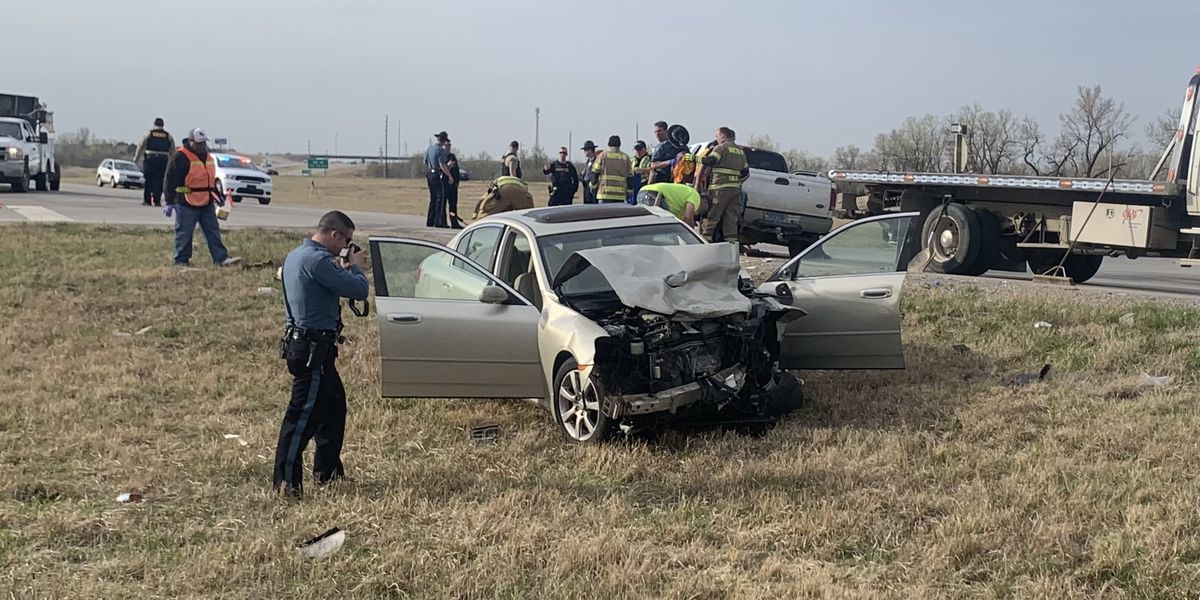 MAYETTA, Kan. – A section of US-75 highway in southern Jackson County has seen more than its share of serious crashes over the years.

The most recent collision occurred around 7:43 a.m. Tuesday at a location where 158th Road crosses the highway.

In that crash, four people — including two children — were transported by ambulance to Stormont Vail Hospital in Topeka with serious injuries.

US-75 is a four-lane divided highway in both Shawnee and southern Jackson counties that carries north- and southbound traffic.

Featuring a grassy median, US-75 has a posted speed limit of 70 mph.

The crashes in southern Jackson County, however, have come largely at locations where east- and westbound county roads cross the highway.

Such was the case on Tuesday morning.

According to the Kansas Highway Patrol, a 2003 Ford F-150 pickup truck was eastbound on 158th Road and was crossing US-75 highway when it was struck by a 2005 Infiniti G car that was northbound on US-75.

Jackson County sheriff’s officials said the driver of the pickup truck, identified as Rachael Louise McCoy, 29, of Holton, was ejected from the vehicle.

McCoy was transported by ambulance to Stormont Vail Hospital in Topeka. The patrol said she wasn’t wearing a seat belt.

Two children in the pickup truck also sustained serious injuries and were taken to Stormont Vail, authorities said. The patrol said neither child was wearing a seat belt.

The driver of the Infiniti, Waye A. Dunn, 83, of Lyndon, also had critical injuries and was taken to Stormont Vail, authorities said. Dunn was wearing a seat belt.

Jackson County Sheriff Tim Morse told 13 NEWS that a number of crashes have been reported at road crossings on US-75 highway.

“Over the years,” Morse said, “we’ve had a number of serious accidents in this particular area.”

Morse said in particular, crashes have occurred where 162nd, 158th and 150th roads crossed US-75.

Morse noted that “there have been some modifications” at 150th Road, where exits and an overpass were constructed, helping to improve traffic safety in that area.

Morse urged motorists to slow down at intersections on US-75 and watch for vehicles entering the roadway.

“We always have to be very attentive to other vehicles when they approach the highway,” Morse said. “In this particular area, it’s always safe to slow down and really pay attention to oncoming vehicles, because, obviously, sometimes people don’t see you, and bad things do happen.”

According to WIBW records, other serious crashes that occurred in crossing intersections in the same vicinity of US-75 highway in Jackson County include:

• A car-semi crash on June 9, 2020, at a crossing at 214th Road and US-75 highway, just south of Holton. A Topeka woman was seriously injured in that collision.