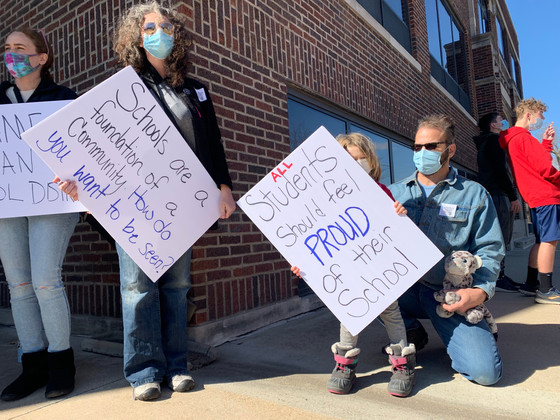 TOPEKA, Kan. – The USD 345 Board of Education will hold discussion Monday on whether to rename the district.

A group of students plans to protest before Mondays school board meeting, they hope the board takes action to disassociate from a person with ties to a hate group.

Its been almost six months since student journalists at Seaman High School published an article in their school paper that revealed, Fred Seaman, was a chief officer of the Topeka KKK. Students say the district has barely addressed it.

“I was expecting more of a movement to come out just by itself like I didn’t think that it was going to take us students to be out here having a protest and having another protest and then speaking up at this next board meeting in order for change to happen,” said student, Rene Cabrera.

Students say the district is a welcoming and loving community and they don’t want it represented by someone who was the complete opposite.

Over the past month, the group has gained support through an online petition with more than 44,000 signatures, but they have also faced criticism from those not wanting to change history.

“We’re not erasing history, we’re not changing history, whether we like it or not fred seaman will always be a part of usd 345, an important part, he founded this district and he will always exist in the USD 345 museum and in memories and classrooms however we still don’t want to associate ourselves with him.” The group hopes Mondays protest will motivate the board to further acknowledge the issue.

When the article was published last fall, district officials said they were considering how to get community input on the issue. The USD 345 Board president said last week racism and hate have no place in the district — and Monday’s board meeting will discuss process for moving forward. He also said he’ll recommend the superintendent appoint a task force including students, parents, alumni and community members.

Count shows homelessness down but number of people living on streets rose by 62.5%