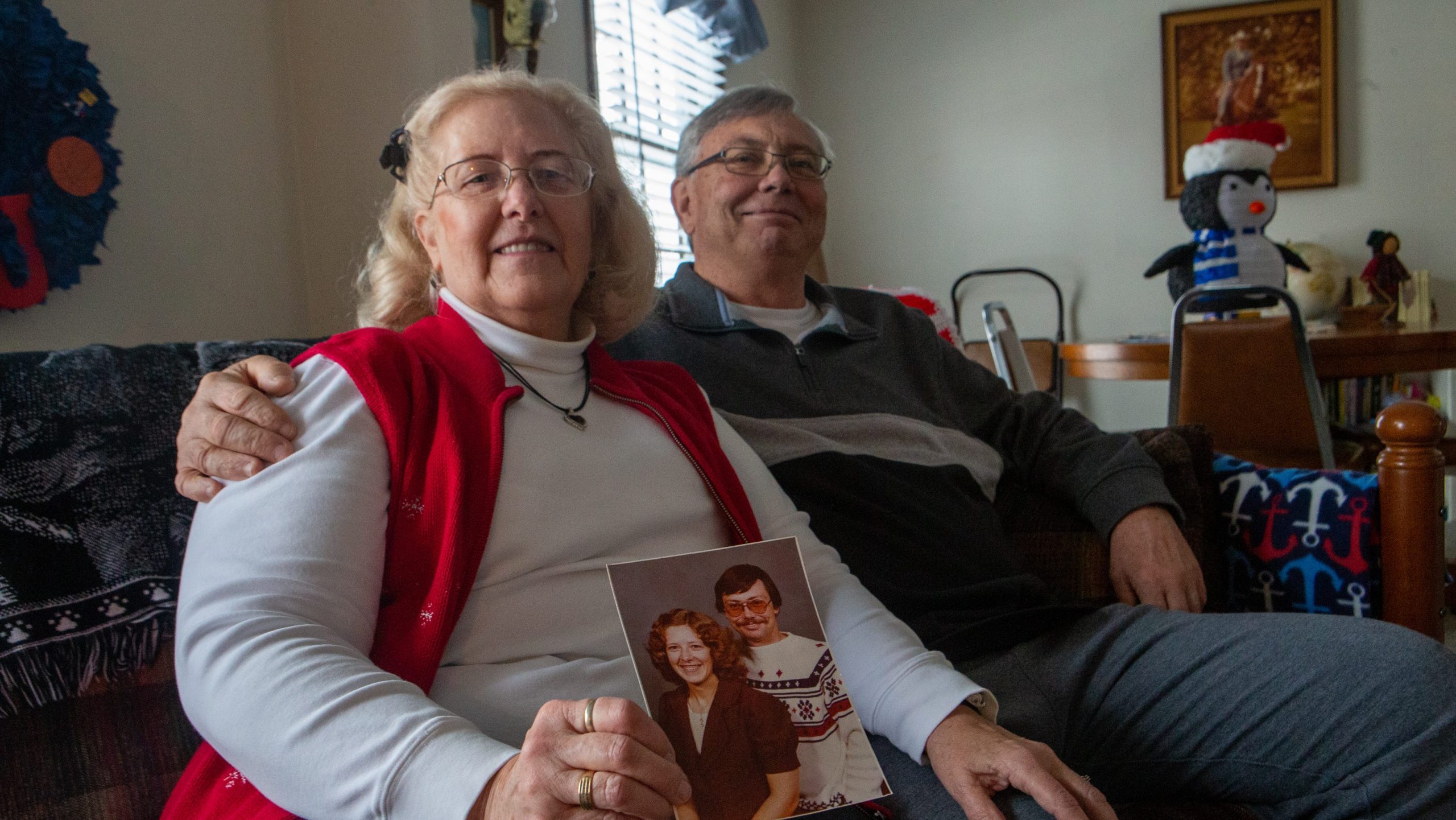 TOPEKA, Kan. – Husband-and-wife duo Randy and Mickey Shannon grew up just 5 miles apart from each other in northeast Kansas.

According to Mickey, the pair met in middle school after their separate school districts in Waterville, her hometown, and Blue Rapids, Randy’s hometown, consolidated to form Valley Heights Unified School District 498.

“That’s where I met him,” Mickey said.

She was a year younger than Randy. And as she entered her freshman year of high school, the pair began dating.

They stayed together throughout their high school years. He graduated in 1974 and she in 1975.

And in August of 1976, those high-school sweethearts tied the knot. Almost 45 years later, Mickey and Randy, who now live in Topeka, are still together, having traded their small-town roots decades ago for life in the capital city.

Though some things about their relationship haven’t changed — “He’s always trusted me. I’ve always trusted him,” Mickey said — a diagnosis in April 2016 added a new level of complexity to their marriage.

Still, they have managed such complexity with grace.

About a year-and-a-half earlier, in 2014, Mickey said, Randy came home from work one afternoon after completing a 6 a.m. to 3 p.m. shift as a department head at Dillons.

“He came home. I came home from work. We did our normal routine in the evening,” she said. “He goes to bed because he has to get up early the next day, so I go take my shower. I’m washing my hair, and he comes into the bathroom and opens the door and says: ‘I’m heading to work. I’m going to be late.’ “

It was 9 that same night, and Randy wasn’t scheduled to work until 6 a.m. the following day.

“I have shampoo in my hair. I have to get the shampoo out, and I call him on the phone,” Mickey said. “I hear it answer, but then it clicks like he hung up.”

So with hair still wet, she got dressed and headed out the door after him.

“I drove to the store he was at, and he was standing in the aisle,” Mickey said. “He had his uniform on. They had red shirts they had to wear with black slacks. And he was just kind of looking around like he wasn’t sure where to go. I went over to him and put my hand on his arm, and I said, ‘Randy, it’s nine at night, and you need to be home in bed.’ “

That was the first time Mickey remembers Randy showing signs of dementia.

From the time of that Dillons incident to his diagnosis in early 2016, Randy seemed fine, Mickey said. But brain scans and analysis by a local neurologist confirmed the condition: “dementia with Alzheimer’s-type symptoms.”

Since then, some things in their lives have changed. Randy is no longer able to drive and can’t grill or mow the yard like he used to. Mickey is now in charge of all the cooking, and she’s been posting more “throwback Thursday” photos to Facebook recently.

But one thing hasn’t changed — Mickey and Randy’s love for each other is strong, and they are going through such uncertainties in life together.

“Because we grew up together, he knows me well,” Mickey said. “He can tell if I’ve had a bad day, just like I can tell if he has.”

When those bad days hit, Mickey and Randy work together to make them better. Mickey said her husband sometimes gets upset at his impairment.

“He gets frustrated he can’t do the things he always did,” she said.

But there are a couple things that come in handy when those times roll around — music and “cruisin’.”

“He loves music,” Mickey said. “We have an (Amazon) Echo Dot at home. He likes hard rock, and I don’t. But we have Alexa play hard rock for him, and it does calm him.”

And cruising around town in the car is something that takes both of them back in time.

“Since we grew up five miles apart, he got used to driving over to the town I lived in,” Mickey said. “So he always likes to do what he calls cruisin’, go cruising. Sometimes we’ll get in the car and cruise out by Lake Shawnee or just cruise around town, get him out of the house, change of scenery.”

She notes that changes in routine can be difficult for those with dementia, so they try to keep their day-to-day lives as familiar as possible — and cruising around town or going for walks are often a part of that.

Once a week, usually on Thursdays, he has a couple longtime friends over — men he met while working at Dillons. Randy retired from his job there in 2019, after 35 years in the grocery business.

“They worked on the night crew, so they got to know each other,” Mickey said. “They used to go to a bar, and they’d just catch up with what’s going on in everybody’s lives. Of course, with the pandemic, we changed that so they could come to our house. … They obviously know his diagnosis, but that is always the highlight of his week.”

When the weather is nice, Mickey also takes Randy out to his older sister’s farm nearby. They visit, and he gets to help with odd jobs around the property.

“That, too, helps him, keeps his mind busy and alert, and I think has been really good for him,” Mickey said.

Randy also has a brother still living that he calls once a week, along with an old high-school buddy. And he checks in regularly with the couple’s two adult children.

“And that’s usually the day the two friends he used to work with come over, so that’s a really happy day for him,” Mickey said.

She also ensures he makes it a couple times a week to the LULAC Senior Center in Topeka’s Oakland neighborhood. There he participates in activities, such as trivia and karaoke, with his peers.

Juliette Bradley, Kansas director of communications for the Heart of America Chapter of the Alzheimer’s Association, calls Mickey “a warrior caregiver.”

“I think that you’re not only a brave soul, but you’re a very brilliant woman,” Bradley said to Mickey. “And the way you’re handling this and the ideas that you come up with to be able to make sure that his integrity is intact and never questioned by anyone — it takes a creative woman to do that.”

But Mickey says she and Randy are still very much a team.

“I know Randy appreciates the things I do for him, because almost every day towards the end of the day he walks over to me, gives me a hug and says to me, ‘Thank you for all your help today,’ ” Mickey said.

What’s your favorite place in Topeka to eat pancakes? We want to know.