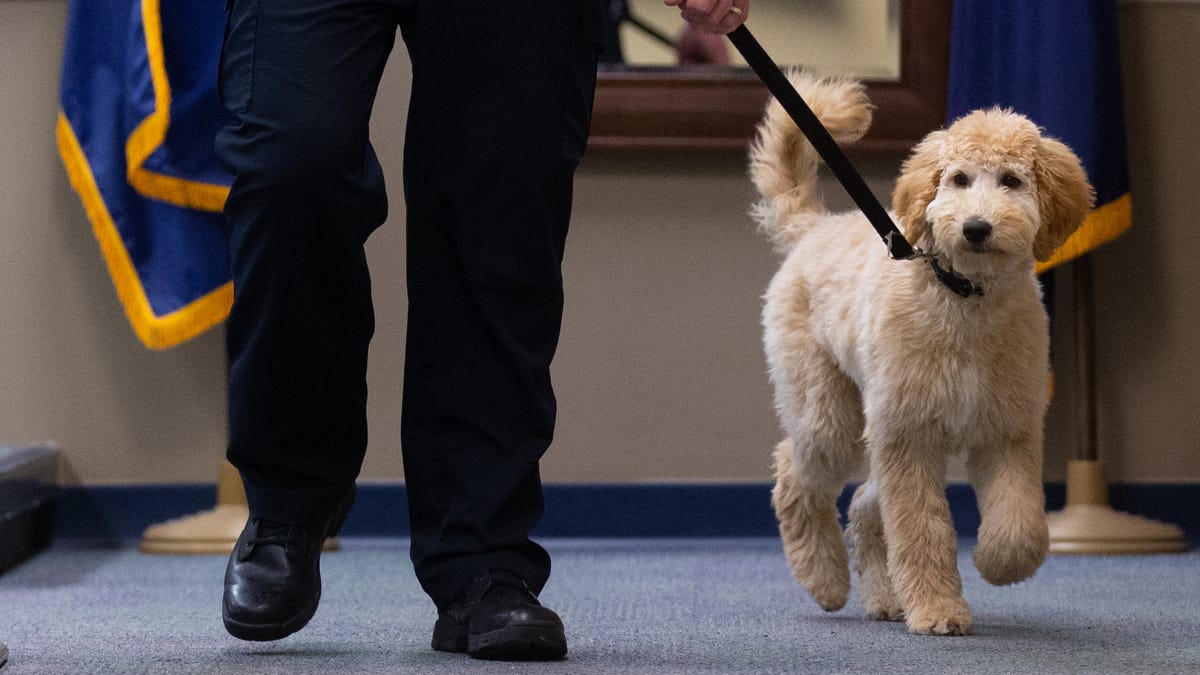 TOPEKA, Kan. – The newest member of the Topeka Police Department has four legs, a tail and a friendly nature expected to bring smiles to the faces of officers and the citizens they serve.

Her name is “Gracie,” and she’s a 5-month-old, apricot-colored Goldendoodle the department recently acquired as its first therapy dog.

Her handler, Lt. Matt Danielson, said he gave Gracie her name after seeing the phrase “Saved By Grace” on the back of a man’s shirt.

“That’s kind of her purpose, is to save people, if you will,” he said.

Happy people make better employees, and Gracie’s main job is to lift the spirits of police department employees, said Danielson, with whom she lives.

Those employees like having a “happy, friendly dog” around, said Gretchen Spiker, the department’s public relations specialist.

Her presence clearly made a difference in terms of helping the officers and detectives present to “open up and communicate,” he said.

Danielson also has been bringing Gracie to police roll call sessions, where she mingles with officers who are beginning or ending their shifts.

“It’s been really cool,” he said. “People have really just lapped it up.”

“She makes me more approachable,” he said.

Police therapy dogs aren’t exactly a new idea, but most police departments don’t have them yet, Danielson said.

He said that after the Topeka department authorized him to acquire a therapy dog, he researched the available options and decided to get a Goldendoodle.

Dogs of that breed are friendly and intelligent, and don’t shed much, Danielson said. Gracie doesn’t shed at all, he added.

The police department’s taxpayer costs for having Gracie are minimal, Danielson said.

Community donors paid for the department to buy her from a breeder, and also covered her costs for equipment, supplies and training, he said.

Hill’s Pet Nutrition is donating her food, so her veterinary bills are all the police department needs to cover, Danielson said.

He said Gracie has attended one session to receive training needed to become a therapy dog and must attend at least two more to earn certification.

“The beauty of it is, even though she’s not certified yet, she’s already doing what we want her to do,” he said. “She’s making people relax and smile and enjoy being with her.”

‘Together as a team’: This Topeka couple, despite a dementia diagnosis, is keeping love alive