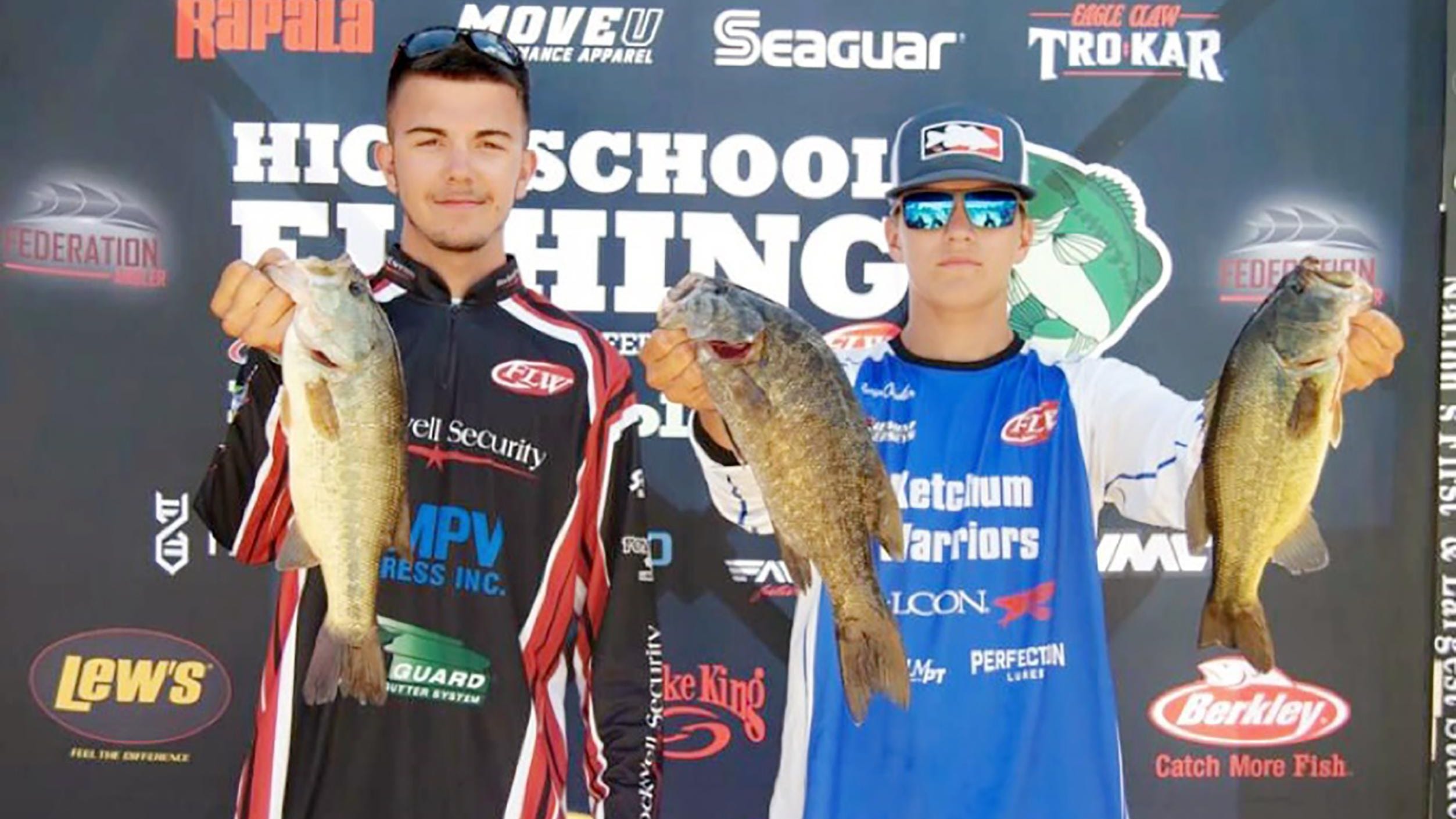 TOPEKA, Kan. – Shawnee Heights’ Parker Still may have lost his chance at winning the FLW High School National Bass Fishing Championship on Thursday, as he and teammate Austin Chandler, of Ketchum, Okla., finished in a tie for 36th and failed to make the cut.

On Friday, however, Still and Chandler earned something just as valuable — a coveted spot in Saturday’s FLW World Finals.

Like the national championship, the World Finals also takes place on the Mississippi River in Lacrosse, Wis.

The structure of the World Finals event, which runs concurrently with the FLW National Championship over four days, can be a bit confusing. Here’s how it works: The top eight teams from the second-chance round, top 12 from the semifinals round and one drawing winner of the remaining 280 or so teams get to join the 10 anglers who competed in Friday’s national championship in the Saturday’s World Finals field.

Fishing in the second-chance round, Still and Chandler outfished the entire field, weighing a 10-pound, 6-ounce bag to capture the victory and clinch a berth into Saturday’s main event.

What’s more impressive is how quickly Still and Chandler locked up the round. Still said they had a limit by 10 a.m. After making their half-pound cull, however, the team broke their trolling motor off. That led them to weigh in almost two hours early.

“We found a spot pre-fishing and had a solid pattern put together,” Still said Friday evening. “Fished it every day and only went in there to get a limit because we knew there was a lot of fish there and we were trying to stretch the spot to give us a limit each day. Went out today and found that we had the creek to ourselves. Did the same thing we did Day 1 and Day 2 and managed to get two good, quality fish and one decent keeper.”

Still said they had about 9.5 pounds and weren’t sure if that was going to make the cut, so they decided to take a gamble and fish some new water.

“Not after five minutes in our new spot, Austin and I landed a 3.4-pound largie to knock up to 10-6 for three fish,” he said. “Decided to leave the spot just in case we made the cut and save any fish that were gonna bite today for Saturday.”

Another Kansas team made it into contention in Saturday’s World Finals, as Lenexa’s Ryder Mains and Mason Chapman competed in Friday’s national championship against the rest of the top 10.

Mains and Chapman started out the tournament with a bang, posting a Day 1 bag of 11-11 on Wednesday before dropping into third place Thursday with a two-day total of 17-15.

In the final round, the Legacy Christian Academy products again fell down the rankings a bit, but this time it was due solely to a 3-pound penalty levied against them for being three minutes late to weigh in because of navigation issues.

“We were trying to do a repeat of what we did the first day,” Chapman said. “While we did in weight overall, we were stopped by a barge which cost us three pounds and three spots in the end. So that really caused some serious problems for us there.”

Mains said they knew they were taking a bit of a risk by trying to fish a spot that required going through river locks with an hour and a half to spare, as the barges have priority in them. However, it was an area that produced big for them on the first day.

“So basically we have to lock up two of the next pools to fish our best spot, and that’s a risk we didn’t take yesterday and we regretted that,” Mains said on Friday evening. “So today, we did take that risk and tried to get a better limit than yesterday, similar to what we did the first day, and we ended up getting stuck up there unfortunately. So that cost us quite a bit.”

At the end of the day, Mains and Chapman placed sixth overall, finishing with 25 pounds exactly after the 3-pound deduction.

Iowa’s Lawson Losee and Kooper Tweite, of Riceville High School, held onto their Day 2 lead to capture the championship Friday with a three-day, nine-fish total of 30-4. Trey McKinney and Zach Martin, of Illinois SAF, finished second with 28-7, with the Lukfata Falcons’ Jace Anderson and Brayden Harcrow third with 26-7.

That means without the penalty, Chapman and Mains would’ve finished third. The championship was winner-take-all, however, so the three-spot drop wasn’t the end of the world for the team.

Mains said Friday that the team had a lot of work ahead of it to climb back to the top in Saturday’s World Finals after the standings reset.

“Basically we know we still had the biggest bag of the tournament,” Mains said. “That first day, that 11-11 that gave us the lead, no one’s beat that bag. So we know that we are on the winning fish and they just have to do their part. Our plan is basically to try to replicate the first day and hope that the fish show up better than they have the past couple of days.”

Still added that the conditions in Lacrosse were comparable to what the anglers were used to fishing back home in Kansas and Oklahoma, which he credits for helping both teams in reaching the final day.

“I think we’re doing well because we found something to fish that is similar to what me and Austin do down south, which is flipping brush,” Still said.

For Chapman, the experience has been a dream come true, especially with his father — professional bass angler Brent Chapman — along for the ride as the boys’ boat captain.

“It’s been awesome,” Mason Chapman said. “I’m really glad that he’s here. He knows the body of water pretty well and I think that’s definitely helping us more than we could mention this week.”