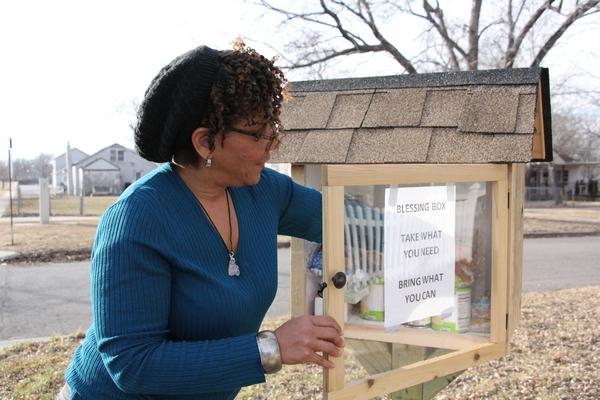 TOPEKA, Kan. – Blessing boxes have been around Topeka for a while now but one local couple is hoping to breathe new life into the charity.

“We first moved into this home in March of last year and one of the first conversations we had is do we want to put up a blessing box and we were sitting around about mid-November having coffee and we just realized that it was time.”

The motto of blessing boxes is “Take what you need, and give what you can.”

Blessing boxes have been around Topeka for quite some time.

“Some people stop by and take two items, some people take maybe one to feed their family for the evening, it doesn’t matter to us,” said Jeanine Russell.

After they got their blessing box set up, Jeanine and Ania discovered that the need was greater than they ever could have imagined.

Now they are hoping to extend that blessing to help even more people.

“We would like to refund the repair, whether its through volunteer, through money, whatever of all the existing blessing boxes in Topeka and within a week or two I’m going to know where all of them are and what kind of food goes in and out.”

They say they are focused on refurbishing the existing boxes for now but they hope that others are inspired to join in the future.

“Somebody reached out the other day, who builds your box, what plan did they use, someone might want to build one in their front yard, I also say to people pull your community together, make sure you’ve got the resources to keep that filled.”