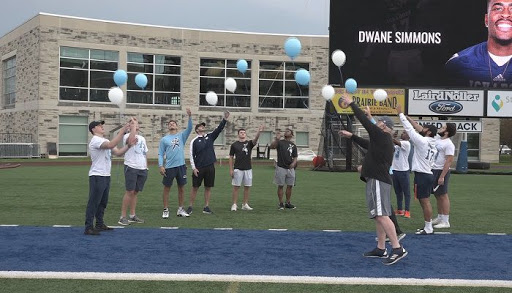 TOPEKA, Kan. – It’s been one year since Dwane Simmons was shot and killed at a party outside a home near the intersection of SW 13th and Lane Street.

Dwane Simmons teammates and Washburn Football coach Craig Schurig gathered at Yager Stadium on Tuesday, to share memories and honor a life that was taken too soon.

“He’s very close to this team still and we still think of him every day,” said Coach Schurig.

A teammate and a best friend, Simmons made an impact both on and off the field.

“He just wanted to have fun, he wanted to have a good time with everybody. That’s what I miss most about him is that comfortability with him it’s never an awkward moment, never uncomfortable.. that was just my dawg,” said Kevin Neal.

“I mean every day he just attacked it and his toughness.. you need to be tough but he did it with a smile on his face so he inspires me every day you know if you feel a bit down hey get up and go get after it,” said Coach Schurig.

“He immediately makes everyone laugh, he’s got the biggest smile in the room… this time last year we were at a party and we had a basketball and a little basketball hoop and the dude was trying to dunk on everybody and he was the shortest dude. He was just trying to make everybody laugh and that really symbolizes what he meant to everybody.”

Coach Schurig says his legacy will continue to live on.

“I think he will be remembered fondly by his team mates and coaching staff and people in the town and we’ll carry his memories through our life. Just the way he inspired us. He’s a wonderful young man, his energy is positive and it’s in us everyday.”