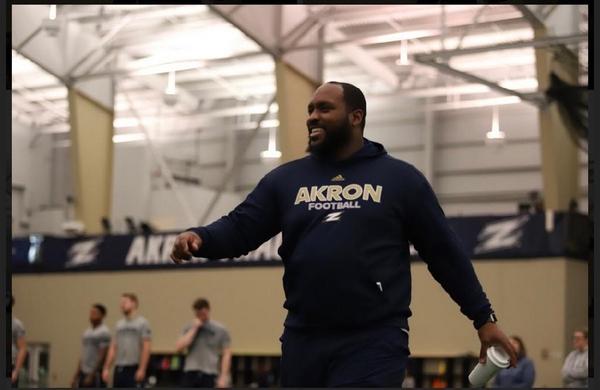 TOPEKA, Kan. – Former Topeka High football standout Tyrell Everett is in the process of packing for his impending move from Akron, Ohio to Dubuque, Iowa.

Of course, moving is nothing new for Everett, a former All-City and Kansas Shrine Bowl participant for the Trojans before playing collegiately at Butler Community College and Baker University.

Everett embarked on a coaching career after capping his Baker career in the 2015 season and has had coaching stints at High, Butler, West Florida and Akron before recently accepting a position as defensive line coach at Clarke University.

“Each and every one of them has served a purpose, a big purpose,″ the 27-year-old Everett said of his frequent coaching moves. “It’s definitely been a journey and just being able to coach ball, at the end of the day that’s what it’s all about.

“It’s about coaching ball and impacting young men’s lives. I’ve built roots, not only in my yard, but also in other yards as well.″

Now Everett will be back in the Heart of America Athletic Conference where he earned second-team all-conference honors for Baker as a senior.

Everett will also be reunited with Clarke head coach Miguel Regalado, who became the Pride’s head coach in 2017.

“He was the (offensive coordinator) when I played at Baker University and he’s been trying to get me on his staff since Day 1,″ Everett said.

Everett finally said yes to Regalado this spring and will be looking to help the Pride improve on last fall’s 2-9 record.

“He reached out and it’s been during corona so we were texting and he said, ‘Hey, there may be a possibility that this could be opening up.’ ″ Everett said. “I was like, ‘This is destiny. You reached out for three years in a row and you’ve offered me this opportunity, I’m in.’

“It’s a great fit. Me and coach Regs understand each other very, very well. He helped groom me not only as a young man, but as a player, so I’m very grateful to be a part of his staff.″

Like most young coaches, Everett dreams of reaching football’s top levels and becoming a head coach at some point, but said he’s in no hurry.

“It may sound cliche’, but I am living the dream,″ he said. “I’m fulfilling my dream right now. As long as I continue to make a positive impact on lives and continue to groom young men to be better on and off the field and just continue to grow, I think that’s enough for me.

Everett is getting ready to coach in his fourth different state, but promises he’ll never forget where he came from and all the people that have helped him along the way.

“If you would have told me 10 years ago I would be where I am today I would have chuckled at you,″ he said.

Now Everett wants to have that same kind of impact on the people he comes in contact with.