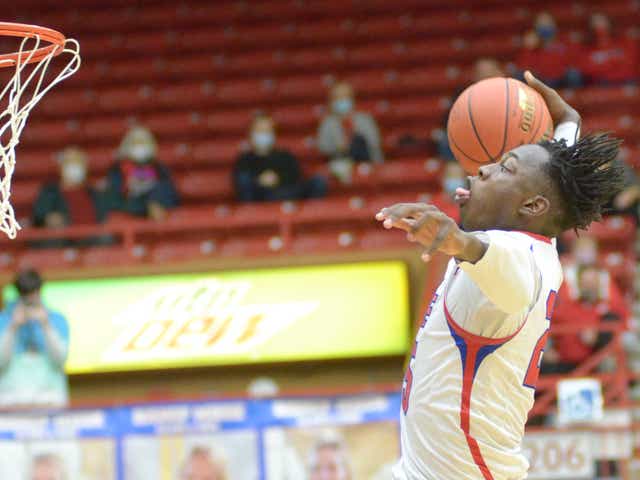 TOPEKA, Kan. – When it comes to naming which sport is his favorite, Jayden Garrison doesn’t hesitate too long in picking basketball.

Not a huge surprise. A four-year starter for Little River during his career, Garrison has more than made a name for himself on the hardwood, earning All-Class 1A honors three straight years and a spot on this year’s 2021 Topeka Capital-Journal All-State Top 5 team.

But almost in the same breath he deems basketball his sport of choice, Garrison readily admits, “I like them all.”

“I was always a gamer, just loved any sport I could play,” Garrison said. “I always had a ball in my hands, always was playing something. That’s just what I did.”

The multi-sport standout actually began his high school career a bit out of character. For his first two years at Little River, Garrison opted not to play football to concentrate on honing his basketball skills.

He made the most of that dedication, turning into not only one of the top players at the Class 1A level, but also in the state.

Garrison finished his career with 2,082 points, averaging a career-best 24.4 points per game this season in leading Little River to the Class 1A Division I state semifinals.

“I’ve coached at 5A and 6A schools in Kansas for quite awhile and I can’t say I’ve been around a better offensive player as far as his skills go,” said Little River coach Wayne Morrow, who coached Garrison the past two years. “He can play at any level and he’s a true competitor who hates to lose. He’ll do anything he can to make himself better.”

But getting back on the gridiron pulled at his heartstrings and when Kevin Ayers took over the Little River program in 2019, Garrison decided to play again.

It turned out to be a huge for both he and the Redskins. Little River went 9-3 during Garrison’s junior season before going 11-2 this fall, capturing the Eight-Man Division I state championship with a wild 70-58 win over Leoti in the state championship game.

“Coach Ayers came in and said, ‘It’s a small town and all the athletes need to be out for every sport if you want to be good,’” said Garrison, who ran for 200 yards and four touchdowns in the title game and finished the season with 2,400 yards of total offense and 50 touchdowns. “So he talked me into coming out and man am I glad I did. I had no idea I’d have that kind of impact on the football field. It’s definitely something I’ll never forget.”

But the Redskins ran into an Olpe team that got hot and rode the momentum to the state title, suffering a 75-66 semifinal loss in a game where Garrison scored 28 points.

“Getting over the hump and winning the sub-state championship last year was big,” Garrison said. “Making it to state and then it getting shut down was horrible because we felt we had a pretty good chance of winning it. This year was also a great experience, getting back to the final four. We came up short and it wasn’t our day and Olpe just played really well.

“The four years this senior group put together just kind of got Little River back on the map. It was a great experience for us all and for the community.”

A pitcher and second baseman for the Little River baseball team, Garrison is ready to try and lead the Redskins to a state title this spring before turning his attention back to basketball in college.

But no matter how the spring ends up, Garrison said he couldn’t have dreamed up a much better high school career.

“It’s been awesome,” he said. “Obviously I’ve had a lot of success, but I’ve also had a lot of great teammates and coaches who played a big part of that. I put a lot of work in over the summers and was fortunate my parents could afford for me to play travel ball so they get a lot of credit, too.”

Garrison’s company on this year’s All-State Top 5 team are big-school stars who also have been program-changing impact players.

Campus senior Sterling Chapman is the only repeat selection from last year’s Top 5, earning All-State honors for the second straight year. He led the Colts to the Class 6A state championship game and a 21-3 overall record after Campus went 23-0 and reached the 6A Forever Four last season, averaging 18.8 points and 12 rebounds per game as a senior.

Lawrence senior Zeke Mayo and Blue Valley Northwest senior Alston Mason were two of the most dynamic scorers in Class 6A, each averaging better then 21 points per game.

Mayo and his Lion teammates denied Mason and the Huskies a third straight 6A state title, knocking them out in the state quarterfinals before Lawrence fell in the semifinals despite a 41-point performance from Mayo, including 29 in the fourth quarter.

Miege’s Mark Mitchell is the lone state champion on the All-State Top 5, leading Miege to a dominating showing in capturing the Class 4A state crown. One of the top juniors in the nation, Mitchell averaged 18.1 points per game this season after topping 20 points per game as a sophomore.

The 2021 Boys State Coach of the year is Hillsboro’s Darrel Knoll, who won his fourth state championship of his career — and first in 23 years — when the Trojans captured the Class 2A state crown.