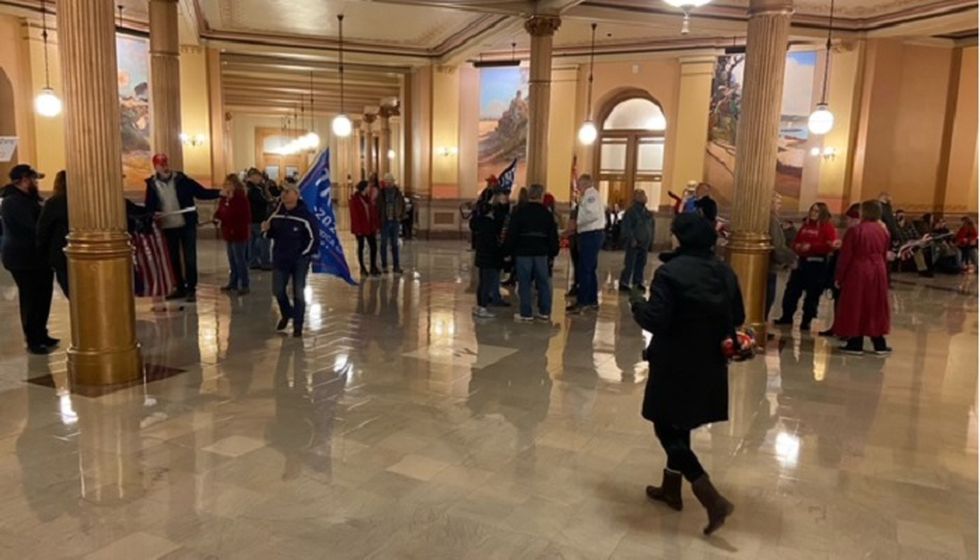 TOPEKA, Kan. – Kansas law enforcement and the protesters want to make it clear that what occurred in Washington D.C. did not happen in the state’s capital.

Hundreds joined the “Kansas Red Wave” “United We Stand, Fight For Trump” rally where they began the day driving past the Governor’s mansion. They then made their way to the Kansas Statehouse steps.

Jessica Pereira, organizer of Kansas Rallies, said, “We believe that we won the election by a landslide and it’s been really difficult for us to show all the fraud that’s been going on.”

Mark Magner was in attendance outside of the capitol building. He said if it doesn’t work today, then they will continue to protest the election results in support of President Trump.

The group then moved inside where authorities said they had a permit and went through the security screening at the entrance.

The authorities added that nothing was damaged, stolen and those with weapons on them, which are allowed in the statehouse, did nothing with them.

She said, “They came in, they followed directions, they were very cooperative. So, there was no issue whatsoever.”

Michael Alvarez was one of the many demonstrating throughout the afternoon. He was frustrated when news broke Wednesday afternoon saying otherwise.

“We didn’t breach it, we didn’t run in here. They put it was like the chaos going on in Washington D.C. it is nothing like that,” he said. “Just more fake news.”

KHP said they had precautions in place as they do for all rallies.

“We would have called in the right people to be here. We were already here. We had plenty on the outside and plenty inside, so we would have responded pretty quick,” said Harrington.

Alongside the Shawnee Co. Sheriff’s Office and Topeka Police Department – KHP will increase security around the statehouse until things settle down from today’s protests in D.C.

Harrington added they were in constant communication with the Department of Administration to make sure everyone was aware of what was happening.