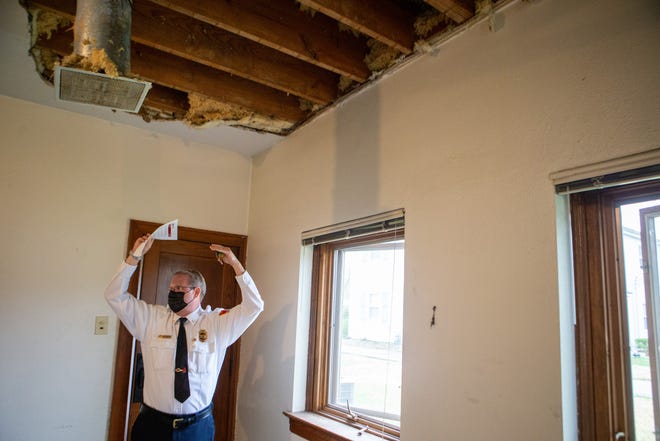 TOPEKA, Kan. – Part of the ceiling in Fire Station 7’s sleeping quarters partially collapsed after firefighters noticed the ceiling was sagging. The ceiling collapsed on Tuesday after department officials were notified on Monday.

Ty Christian, chief of operations for the Topeka Fire Department, said no one was injured and the fire station has been able to still respond to calls. Fire crews are working at the station despite the hole.

He said the hole was originally about five feet by eight feet but is larger after repair crews began working on it.

“Not in my 30 years on the fire department have we ever dropped a ceiling in a dormitory,” Christian said.

Topeka City Council began discussing fire stations and the possibility of building a new station off of 6th avenue. City council first discussed the recommendations from the Topeka Fire Commission at Tuesday’s meeting.

Part of the commissioners recommendations is to invest in station renovations so none fall into disrepair.

Christian said a water leak could be the cause of the collapse and said it is possible that other maintenance issues need to be addressed. A contractor will be hired to fix the ceiling.

Engine 7 was the busiest engine in Topeka last year and one of the busier in the country. Fire Station 7 was built in 1937 as a Public Works Administration project.