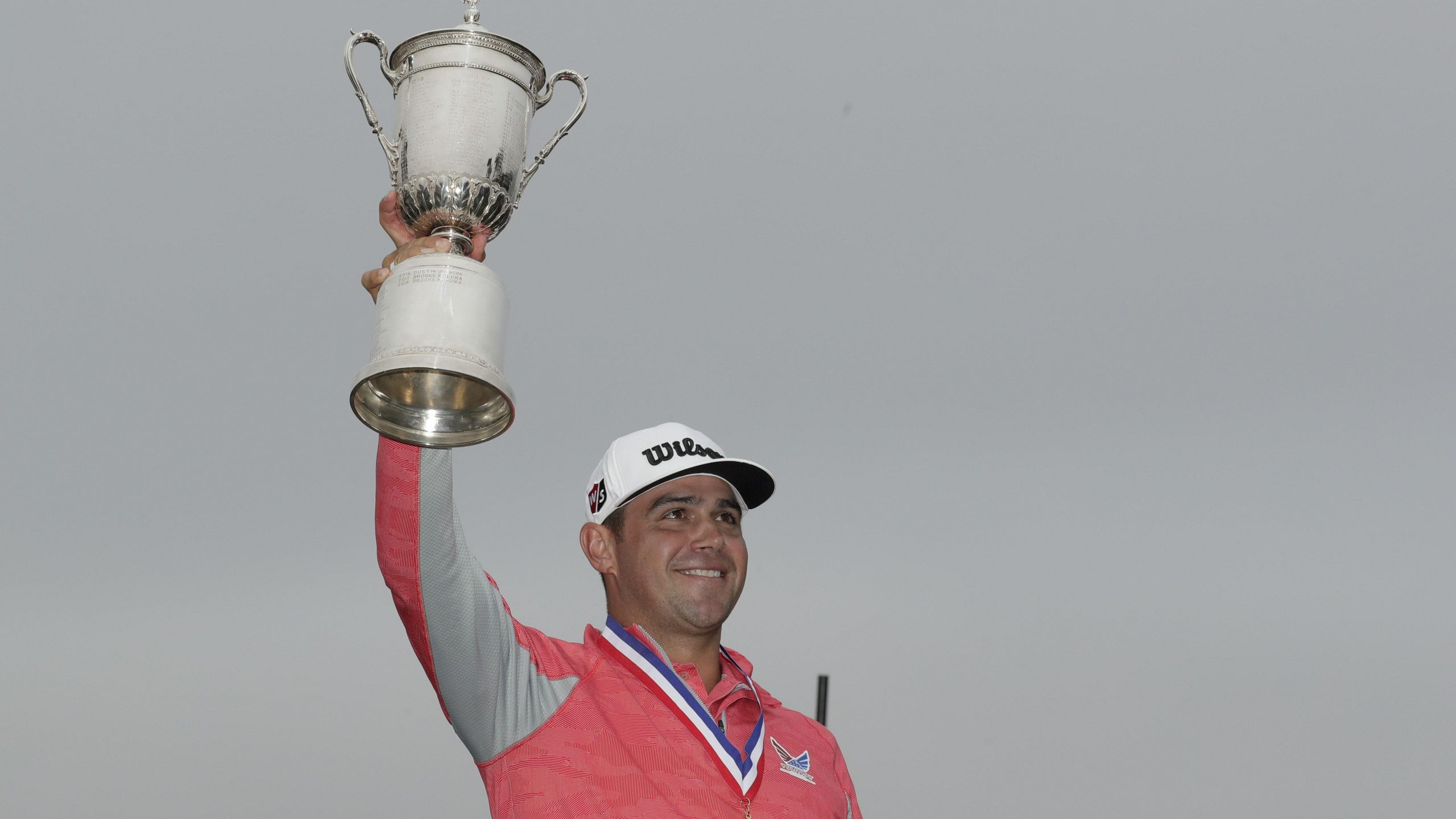 TOPEKA, Kan. – 1. The 2019 U.S. Open champion was a basketball All-Stater and two-time Class 5A state champ at Shawnee Heights and went on to play at Washburn before transferring to Kansas and focusing on golf.

Was a one-time All-Star and two-time Gold Glove-winning outfielder for 14 seasons (1962-75) in the majors.

Two-time Big Eight basketball player of the year was a three-sport star who was selected in the MLB and NBA drafts.

A 2018 inductee into the PBA Hall of Fame, Barnes has won 19 PBA Tour titles and three majors. Barnes earned PBA Rookie of the Year and Player of the Year honors.

As a shooter, earned a silver medal in the 1976 Olympics, set 13 world records and is a member of multiple halls of fame.

Now known as Syed Abdul Mutfi, he finished fifth in the long jump at the 1972 Olympics and also excelled in basketball at Wichita State.

Was a champion in three sports at either the high school, college or pro levels, with his best title being the 1994 Super Bowl.

After starring at Kansas, played for the NFL’s Cincinnati Bengals for eight years, including the 1981 Super Bowl.

Led Rural to basketball and softball titles and won All-America honors and a national title at Oklahoma in softball.

Considered by many to be the best second baseman in Negro Leagues history, committing only one error.

An All-Stater and Mr. Kansas Basketball, Meier became an NAIA All-American and led Washburn to the national title in 1987.

Was a standout at Washburn before playing six years in the NFL for San Francisco and Seattle, including a Super Bowl appearance.

Still playing pro basketball after earning All-State honors and helping Scots to an undefeated season and being named Missouri Valley Player of the Year for Missouri State.

Earned All-Big 12 honors in both volleyball and basketball at Kansas State and played for Team USA in the 2019 Pan American Games.

Was a football and track star at both Heights and Washburn before being drafted by the New York Giants in the 2019 NFL draft.

All-State basketball player went on to star for Kansas State, where she ranked sixth on the school’s all-time scoring list.

Led Scots to the Grand State title and was an All-American at Southwest Texas and a fifth-round draft pick by Denver Nuggets.

Standout at Rural and All-American at Missouri was a first-round MLB draft pick twice and was selected to American League All-Star team for the Royals.

Three-sport athlete at West played football collegiately at Missouri and then professionally in the NFL and CFL.

Helped Rural to a state basketball title in 1960 before becoming an All-Big Eight player and three-year starter at Kansas.

AP Little All-American at Washburn played as a defensive lineman for the Atlanta Falcons in the NFL.

Three-sport standout at Rural was a two-time All-Big 12 setter for Iowa State and has put together a long playing career in Europe.

A two-time 6A wrestling champion and All-State football player for the Trojans, Geary went on to become a three-time All-Big 12 selection as a defensive lineman.

Sweet helped lead Shawnee Heights to a 5A state volleyball title and has helped Nebraska to a NCAA national championship as well as a runner-up finish.

Multi-sport star played three baseball seasons in the minors, was QB at Washburn and one of the city’s top golfers.

All-Stater and three-sport prep standout at Hayden and two-sport standout at Washburn before making it to Major League Baseball with the Cleveland Indians.

The Topeka High grad and Texas Southern Hall of Famer competed in hurdles in the 1968 Mexico City Olympics.

Earned 17 state titles as a T-Bird, never lost an individual state-title race and became an All-Big 12 performer at Missouri.

Basketball star went to Oklahoma and was drafted by the Phoenix Suns in 1974 before enjoying a long pro career in Europe.

Was a two-time undefeated state wrestling champion and a three-time All American at Stanford.

Is the only Topekan to capture an NCAA Division I swimming national title and was a 13-time All-American.

Finished prep career last fall as the No. 2 rusher in state history with 7,703 yards, including 3,009 as a senior. Signed with Minnesota.

All-State pick at Highland Park and scored 1,465 points at South Florida and SMU before playing in the NBA’s G League.

All-Stater rushed for 5,598 career yards and led Hayden to an undefeated state title before playing at Missouri.

A three-sport prep standout who won four state singles titles in tennis and helped lead the Wildcats to three state titles in volleyball.

Averaged 24.4 points as a senior at Seaman and led Washburn to two NAIA tourneys to earn a spot in the WU Hall of Fame.

Two-time NAIA All-American set Emporia State’s single-season scoring record at 24.3 points per game and is in school’s hall of honor.

Seven-time AAU All-American is considered one of the first great “big, mobile” players in women’s basketball.

The Navy SEAL is a Purple Heart and Bronze Star with Valor honoree who won six medals in the 2018 Winter Paralympics, including a gold in Biathlon.

Ranked as the No. 1 boccia player in the U.S. and among the top 20 players in the world over two decades.

Earned All-America honors in football and basketball at McPherson College, where he ranks among school’s scoring leaders.

All-Stater led Seaman to a state championship before starring for Washburn, where she ranks No. 2 on the career scoring list (2,144 points).

Little All-America offensive tackle at Washburn went on to play in the Continental and Canadian football leagues.

All-America defensive end at Stanford was selected in the seventh round of NFL draft by the Green Bay Packers.

Won eight state track golds, becoming the only male in the state to win the 200 four straight years, before starring for Florida.

Fifteen-year Negro Leagues veteran known as the “Super Substitute” because he played at least one game at every position.

Has made 28 career starts for Oklahoma State in the offensive line, earning All-Big 12 honorable mention the past two seasons.

Star sprinter was a multi-year state champion and the first Kansas girl to break the 55-second mark in the 400.

Three-sport prep star won state titles in track and wrestling and was a three-year starter on the offensive line at Kansas.

Track standout set the all-time state high school mark in the 110-meter hurdles and became an All-Pac-10 performer at Oregon.

The all-time state leader in the 200 meters, Green went on to win four Big Eight sprint championships at Kansas.

High school football and track star became a Big Eight discus and shot put champ and an All-American while at Kansas State.

Won five tourneys and more than $700,000 on the PBA Tour, and was the first to bowl a perfect game in a televised title match.

Halfback at Kansas and Pittsburgh spent seven years in the majors, playing every position but pitcher and catcher.

Earned all-conference honors as a pitcher at Allen County and Texas after starring as a quarterback and pitcher at Heights.

Linebacker was a juco All-American at Coffeyville, a leading tackler at Kansas State and spent time in the USFL and NFL.

Standout hitter was NAIA Player of the Year as a senior at Washburn and played two years as a pro in Twins organization.

Played nine seasons in the minors before pitching four years in the majors, where he compiled a 9-13 record and 4.54 ERA.

Nelson played for the U.S. in the first Olympic volleyball event in 1964 and has played tennis at the national and world level into his ’80s.

Earned All-America honors three times as a pitcher and shortstop for Washburn and made the NAIA Softball Hall of Fame.

Multi-sport star is the career assists leader for Washburn University and was an NAIA All-America first baseman in softball.

A multi-sport standout for Seaman, Zeferjahn, a pitcher, was a third-round draft pick of the Red Sox after a standout three-year career at KU.

Finished his major league career with 4.58 ERA, pitching for three teams, to earn a spot in the Kansas Baseball Hall of Fame.

Was a pentathlon All-American at Kansas State after winning six state hurdles titles and three high jump crowns as a prep star.

The “Babe Ruth of Topeka softball” is a KASA Hall of Famer and was a star outfielder for the Ed Marling’s Hornets.

Prep volleyball and basketball star became a 1,000-point scorer at Kansas State, where she also was a top rebounder and defender.

Three-time state track champion became a Big Eight champ at Kansas State and was part of a relay team that set a world record.

Multi-sport star went to Bradley, where he was All-Missouri Valley Conference before playing professionally in Europe.

Pitcher was All-American at Allen County and spent four years in the Mets organization after being a first-round draft pick.

Horak became the state’s first QB to rush and throw for more than 2,000 yards in a season before becoming a standout at Pittsburg State.

Bachelor was an All-Stater in volleyball, basketball and soccer for Rural and completed her freshman basketball season at Creighton in ’19-’20.

Was a double-figure basketball scorer for Texas-San Antonio after setting the city’s career passing record as a quarterback.

Lambotte captured four straight wrestling state championships for the Bulldawgs before continuing his career at Iowa.

Now at Evansville, Metz was 5A-1A swimmer of the year in ’18 as Seaman became the first city school to win a state team swimming/diving title.

Scot All-Stater led Howard to a national juco title and played in the 2011 NCAA Tournament for Morehead State.

Three-sport prep athlete became a three-year volleyball starter and All-American at Georgia Tech and played as a pro.

Chipman earned All-Big 12 volleyball recognition for Kansas State, ending her career No. 2 at KSU in block assists and No. 5 in hitting percentage.

Hill was a 6A state singles champ and four-time state placer at Rural and won an NCAA Division II national singles title for Washburn.

Dicus set seven school records and state records in the 100 freestyle and 200 free at West before becoming an All-American at Virginia.

Three-sport prep standout became a two-time All-American in baseball for New Mexico and spent four years in the minors.

All-America pitcher set nearly every Texas Tech record for a starting pitcher before playing three years in the minor leagues.

An All-Stater in football and three-time state wrestling champion at Rossville, Zlatnik went on to start 31 games for KU football.

Halsey was an All-City, all-league, All-State and All-America pick in soccer, setting a Rural school record with 57 goals, before playing at Baker.

Now at Nebraska, Hoffer ended an outstanding prep track and field career with four gold medals as a senior and won three 5A high jump titles.

Called “one of the most spectacular” polo players in the Midwest while with Topeka’s Old Ironsides team for two decades.