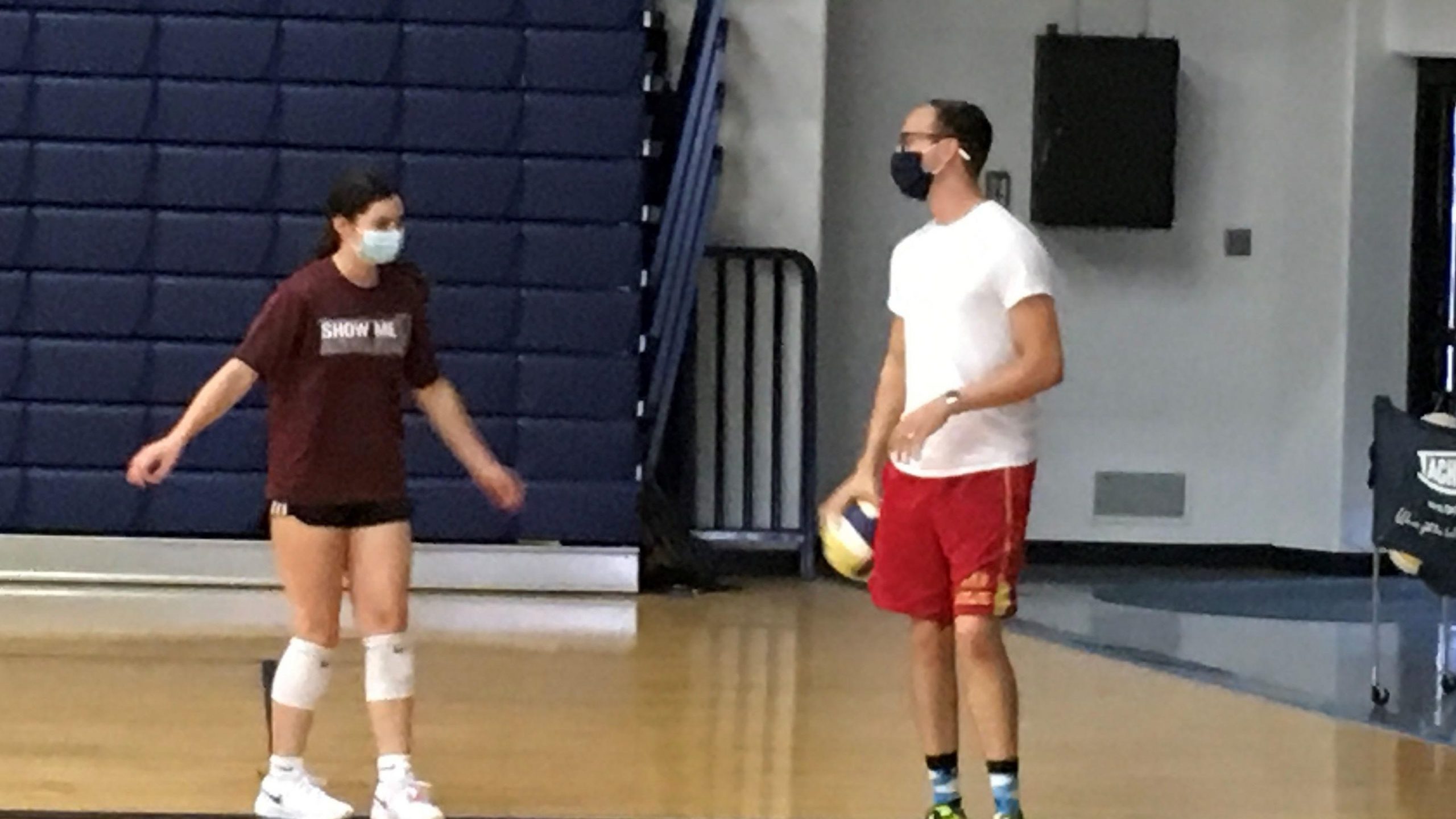 TOPEKA, Kan. – Josh Schmitz coached Hayden’s junior varsity volleyball team in 2019, and that was his plan for the upcoming season, as well.

But all that changed shortly before the start of preseason practice when Kathy Allen stepped down as the Wildcats’ head coach without ever coaching a match and Schmitz stepped in to lead Hayden, which has won state titles four of the past five seasons, including the 2019 Class 4A crown.

“This is nothing that was in my plan or nothing that I saw coming whatsoever, but I’m very excited for it,’’ said Schmitz, a 2011 Hayden graduate who teaches theology and is the campus minister at the school. “A couple of weeks before we could start practice and come back to school, I got a message that this was a possibility.

“There was some thought that went into it because I just got married on July 25th, so a lot of things have been happening since then, but at the same time I would rather put more on my plate and give these girls a chance to have a full season. They deserve that.’’

Miller is a two-time All-City pick who was an All-4A first-team selection last season while Dinkel is a former city newcomer of the year.

“A bunch of the girls I coached on JV last year I moved up to varsity this year so I know that they work together well and I know they have a strong, strong work ethic,’’ Schmitz said.

Schmitz said he will rely on seniors Dinkel, Heideman and Miller to provide leadership.

“I told them beforehand, ’You guys need to lead this team,’ ’’ he said. “From what we were last year to what we are now, It’s a very different team and I need them to be leaders in a winning way.

Outlook — The Lions are set to compete at the KSHSAA level for the first time this season after posting a 23-11 record and winning the Metro Christian Athletic Association title a year ago and going undefeated in league play. Dewalt takes over as head coach from Phil Parker who retired after 27 years as the Lions’ head coach. “We are excited to be a part of KSHSAA this year,’’ Dewalt said. ”The girls are ready to be back on the court and ready to compete.’’

Outlook — “Coming off of a state championship year always brings a lot of pressure, but especially this year when we lost eight graduating seniors,’’ Schmitz said. ”That being said, we still have a loaded team, starring returning starters Dejah Miller and Alyssa Dinkel. The rest of the team all played together last year and had a very successful year as well.’’

Outlook — Langer takes over as coach of the Scots, who will be aiming to improve on last year’s 2-26 record. “As my first year coaching volleyball at Highland Park, our season outlook is going to be great,’’ Langer said. ”The girls are here to put in work and show everyone what the Lady Scots volleyball team is made of. Our short time together during summer workouts the girls put in a lot of work as well as bonding as a team. Our girls have a lot of heart and dedication.’’

Outlook — The Vikings posted a 27-11 record last season. Turner was the city and Centennial League player of the year last season and has committed to Kansas while Baxter was a second-team All-City pick. “We lost our ball control when we graduated four seniors last yer and we have a lot of work to do defensively to get to where we need to be,’’ Schafer said. ”We are a pretty young team for the most part, so we will work hard to try to make up for our lack of experience.’’

Outlook — The T-Birds are coming off a 29-7 season. “We are excited to get the season started to get back to feeling a little more normal,’’ McHenry said. ”We’ve got a lot of new faces, but we have great returners who have improved so much in the offseason.’’

Outlook — “We’ll turn to our four seniors for leadership this season,’’ Bargmann said. ”We’ve got a great group of girls who are ready to compete and hope to continue to improve each match that we play.’’

Outlook — The Chargers are coming off a 15-20 season. “We are a young team with developing skills and talents,’’ Nash said. ”Even through the setbacks of our current state, we have already built strong team chemistry and drive, something I believe will catch eyes, not just this season, but those to come.’’

Outlook — The Junior Blues posted a 40-6 record and finished second in 6A under Bordewick, who is 861-212 at the school with seven 6A state titles. DeLeye was an All-6A pick last fall as a freshman. “We are still going to be a pretty young team, playing sophomores and freshmen a lot of the time,’’ Bordewick said. ”We will have great chemistry and a lot of toughness, which will help a lot. We are going to learn from some of the things we went through last year to hopefully get a shot at the league title and going to state and do well there.’’