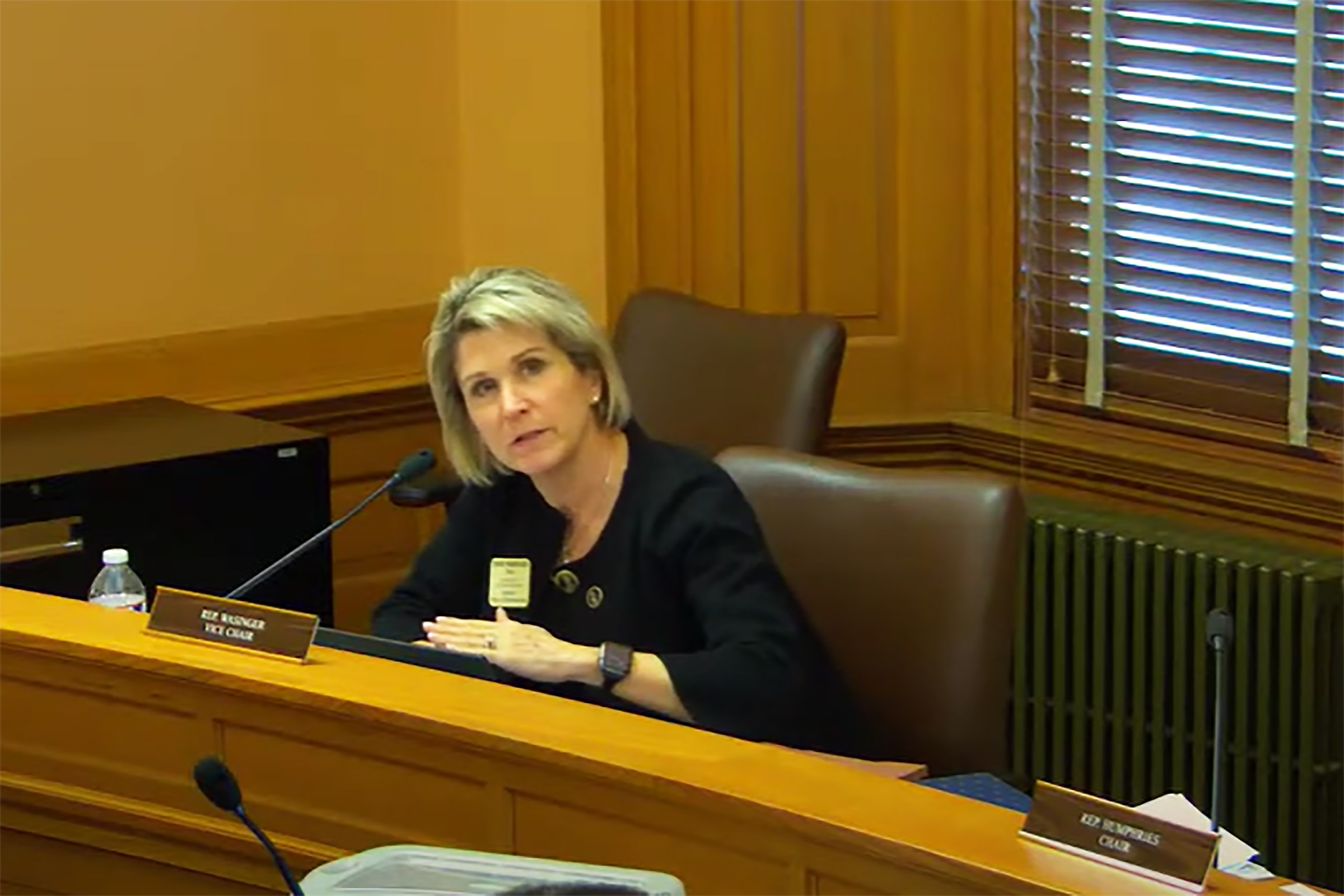 Her perspective — not universally shared by her Republican and Democratic colleagues — carried weight as vice chairwoman of the House Higher Education Budget Committee. The panel was responsible for sifting through budget requests on behalf of six public universities managed by the Kansas Board of Regents as well as Washburn University, community colleges and technical colleges within the board’s jurisdiction. A comparable budget process has been occurring in the Kansas Senate, and both chambers must eventually compromise on a new spending plan for higher education.

“There’s a bunch of duplication of programs within these universities and I believe they tend to cannibalize students from other areas of the state,” said Wasinger, a Hays Republican representing a House district that includes Fort Hays State University. “Throughout all these budgets I’ve seen them ask to continue funding some large programs and they’ve added programs. We just keep making the budgets bigger and bigger and bigger.”

During presentations to the House committee by college and university officials, Wasinger served as persistent critic of state spending on public universities. Wasinger, who earned a degree at St. Catherine University in St. Paul, Minnesota, told a representative of the Kansas Independent Colleges Association during a committee meeting last week how much she appreciated the contributions of private schools. She volunteered that she wouldn’t have been successful had she enrolled at either the University of Kansas or at Kansas State University.

FHSU president Tisa Mason, who informed the House committee the university received 41% of operating revenue from tuition and 24% from state appropriations, said the small percentage of state aid could be viewed as oil that primed the financial pump to make FHSU a solid value for Kansas taxpayers.

Mason, who earned a doctorate at College of William and Mary, said FHSU distinguished itself as a pioneer in distance education because it understood challenges of rural communities. FHSU persisted as a major economic driver in Ellis County as well as four surrounding counties, she said. The university had a $233 million economic impact on the five-county region in 2018, she said, a figure that dropped to $188 million in 2020 when the university struggled with the pandemic.

“Our presence matters,” Mason said. “It matters not only to western Kansas but all our Kansas citizens.”

Blake Flanders, president and chief executive officer of the Board of Regents, said the university system was in the midst of a comprehensive evaluation to identify low-enrollment programs eligible for discontinuation. As many as 60 majors at the universities are being scrutinized to see if they still meet student needs or could be eliminated on efficiency or academic grounds.

The university system is challenged by steady decline in the college-going rate of Kansas high school graduates, Flanders said. Last October, as the pandemic continued, the six universities reported a decrease of 2,600 full-time equivalent students or 3.6%. The community colleges suffered greatly by loss of 11.7% or 4,700 FTE last fall, while the technical colleges in the system experienced a 500 FTE or 8.7% enrollment decline.

“The institutions are engaging with Kansans and certainly trying to reverse these trends,” said Flanders, a graduate of Colby Community College and Kansas State.

The House committee voted to endorse Gov. Laura Kelly’s recommendation for a 5.5% reduction in state aid to the Board of Regents universities in the upcoming fiscal year. The GOP-led committee approved $1.3 million for Kansas National Guard scholarships. The committee agreed to direct $10.4 million to 19 community colleges and six technical colleges for workforce development courses taken by high school students.

Rep. Ken Rahjes, a Republican from Agra in Phillips County and a Kansas State graduate, offered the motion to provide $2.1 million this year and $8.3 million next year to fully compensate colleges for delivering technical education classes. Under the program signed into law in 2012 by Gov. Sam Brownback, thousands of high school students have had tuition-free opportunities to get a taste of possible career options.

“I’m not necessarily the biggest supporter of adding a bunch of money,” Rahjes said. “But, in my five years, I’ve been a proponent of making good investments of our tax dollars. To me, higher education is a good investment. We need to put our money where our mouth is.”

The higher education panel decided Kelly’s proposal to provide the Board of Regents with $10.3 million for distribution to unspecified high-need areas should be evaluated by the House Appropriations Committee. The Board of Regents plans to meet later this week to develop a blueprint for how that funding might be used if appropriated by the 2021 Legislature. Wasinger said that portion of Kelly’s budget proposal gave her pause because it would be inappropriate for the Board of Regents to allocate the money for university employee raises that she suspected could be in the range of 2.5%.

Rep. Brandon Woodard, a Lenexa Democrat and a graduate of KU, said the massive budget problems made it almost impossible to see how raises could be financed for university employees. The governor’s proposed 5.5% reduction would be a huge hit on top of financial disruption borne of the COVID-19 pandemic, he said.

Jerry Farley, who has led Washburn University in Topeka in 1997, said a consistent funding stream that gave students the best educational opportunity was the objective of educational institutions affiliated with the Board of Regents. Farley, recipient of a doctorate from University of Oklahoma, said there was no justification to consider Kansas a high-cost state in terms of college administration. Washburn, which doesn’t classify itself as a state university, spends 80% of its operating budget on staff and benefits, he said.

“We feel your pain as some people say,” Farley said. “Once you go through and you make very difficult decisions, then that comes back to the campus. Each one of us have to make really difficult decisions. We try to do our best to make sure we don’t do anything that impairs in any way students and their ability to get a high-level education.”

Pittsburg State University president Steve Scott, who grew up in Baxter Springs and earned math degrees at PSU, said the southeast Kansas university had been realigning course and program offerings for years. In the past decade, he said, 52 majors or minors were dropped and more reductions were on the horizon. PSU has eliminated 51 faculty positions in four years, he said.

“That is our response to the financial challenges that we’ve had,” the president said.

Scott said PSU was receiving $1.5 million less in state tax dollars than in 2008. If the Legislature adopted the governor’s proposed cut, it would equate to loss of $2 million in state funding.

Emporia State University president Allison Garrett said the university received $34.8 million annually from the state in 2008. The governor’s recommended budget would deliver $32.7 million. She said the raw number was more significant after factoring in the 31% increase since 2008 in the higher education price index.

Garrett said ESU had cut 11 programs in seven years and eliminated 10% of the university’s workforce, including tenure-track and tenured faculty. More jobs will be deleted in the coming year, she said. The university intends to lower operating costs by $4.7 million over the next two years by retaining a hiring freeze, restricting travel and implementation of a voluntary early-retirement plan, she said.

“I think there’s a tendency sometimes for us to think about higher education as an expense rather than an investment,” said Garrett, who earned her law degree at the University of Tulsa. “One of the things we know about jobs of the future is that nine of 10 new jobs require a college degree.”

Congress authorized about $113 million in federal disaster aid to cushion the blow at Board of Regents universities. The governor in 2020 slashed university appropriations by $36 million, which moderated impact of those federal dollars. Her request for the 5.5% rollback followed in 2021.

KU chancellor Doug Girod said the university lost an estimated $72 million in revenue from tuition, housing, dining, parking and events during the previous and current fiscal years due to the pandemic. He said KU reduced spending by $34 million with furloughs, layoffs, salary and hiring freezes and other maneuvers. He projected the revenue shortfall in the upcoming fiscal year could be $75 million. KU also is developing a controversial plan to reorganize academic offerings and reduce faculty positions, including possible dismissal of tenured professors.

He said $44 million in federal emergency assistance to KU was essential to getting campus ready to open for in-person and online classes and to perform testing provide personal protective equipment and provide quarantine facilities.

“We’re very grateful for that federal relief, but we have an uphill climb ahead of us,” said Girod, who earned his medical degree from the University of California at San Francisco. “Our request is really do no harm, if you will. Please, if possible, keep our state funding flat so we try to address the other issues that we have to deal with and not add one more to the pile.”

He said the coronavirus had reduced KU enrollment by 3%, but the more alarming numbers were a 7% decline in freshmen and 18% drop in international students. KU has avoided a tuition increase for two years, he said, but that might not be possible heading into 2021-22.

“We didn’t wait to see what the impact was going to be on our budget,” Myers said. “We started pulling budget levers very, very early. We didn’t wait for a handout.”

He also touted Kansas State’s implementation of a new physician assistant program to help bridge the medical service gaps and the formation of a partnership with Wichita State University to start a nursing program.

Democrats side with campaign benefactors over Kansas students