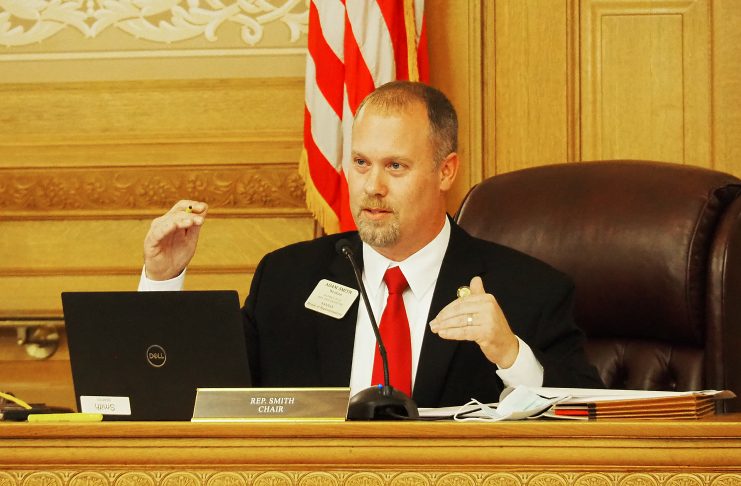 The House proposal incorporates elements of the $470 million Senate plan with a tax increase on out-of-state retailers who sell products online in Kansas. The measure would cost the state an estimated $284 million from 2022 to 2024, with a sizable chunk devoted to allowing Kansans to take the standard deduction on federal income tax returns and claim the benefits of itemized ductions on state income tax returns. Another component would provide tax breaks for multinational corporations.

Some of these costs would be offset by the marketplace facilitator tax — requiring online, out-of-state retailers to collect sales tax for sales above $100,000 annually — but opponents of the bill raised questions about who this bill would benefit. Supporters touted the bill as a reasonable alternative to the plan brought forth by the Senate.

“If you received a 1099 and you did not receive your unemployment benefits, you are not liable for that and this bill would clarify that you do not owe any income tax on fraudulent unemployment compensation obtained on your behalf,” Smith said.

House lawmakers are set to vote on the measure Tuesday as they await federal guidance on how the tax changes could impact available federal aid funds.

The House version of the tax bill remained intact throughout floor debate despite efforts of Democrats who brought forth four amendments, each of which were rejected.

“This could be very costly to the state of Kansas,” said House Minority Leader Tom Sawyer, D-Wichita. “I don’t think we ought to conform until we know what all the cost is and what the ramifications are to the state and to our budget.”

A proposal to legalize medical marijuana advanced past the committee level for the first time in the Kansas Legislature.

“To date, we have scientific evidence supporting the therapeutic efficacy for the use of cannabis in the treatment of many debilitating conditions, among those groups most likely to benefit from the passage of this legislation are veterans,” said Rebecca Cumley in a news release on behalf of the Kansas Cannabis Coalition. “For these reasons, we celebrate a historical moment in Kansas and will continue to advocate for further advances inpatient care as well as full legalization.”

After multiple days of hearings in February, the House Federal and State Affairs Committee took several days last week to debate amendments to House Bill 2184. Committee chairman John Barker, R-Abilene, had expected to vote on the measure last Thursday, but the panel was delayed by the number of amendments proposed.

The development of a medical marijuana act in Kansas has moved at a slow pace for years. Amid a growing black market and indications of widespread support for medical marijuana, there appear to be bipartisan interest in crafting legislation appropriate for Kansas

That idea took one step closer to realization Monday when the committee voted 13-8 to advance the bill to the House floor for debate. The bill was placed into the shell of a Senate measure to expedite consideration in both chambers.

Approved amendments to the bill include a bundle by Rep. Randy Garber, R-Sabetha, expanding the list of qualifying conditions, allowing vaping of cannabis products and removing THC limits. Garber’s amendments were supported by legalization advocates as critical to increasing access for those who need marijuana for treatment.

Other amendments include lowering the 90-day supply possession limit to a 30-day supply, proposed by Rep. John Eplee, R-Atchison, and a requirement of a tamper-proof, Kansas-specific seal on packaging, brought by Rep. Eric Smith, R-Burlington.

Smith’s amendment would also impose an open container law for marijuana products in a vehicle.