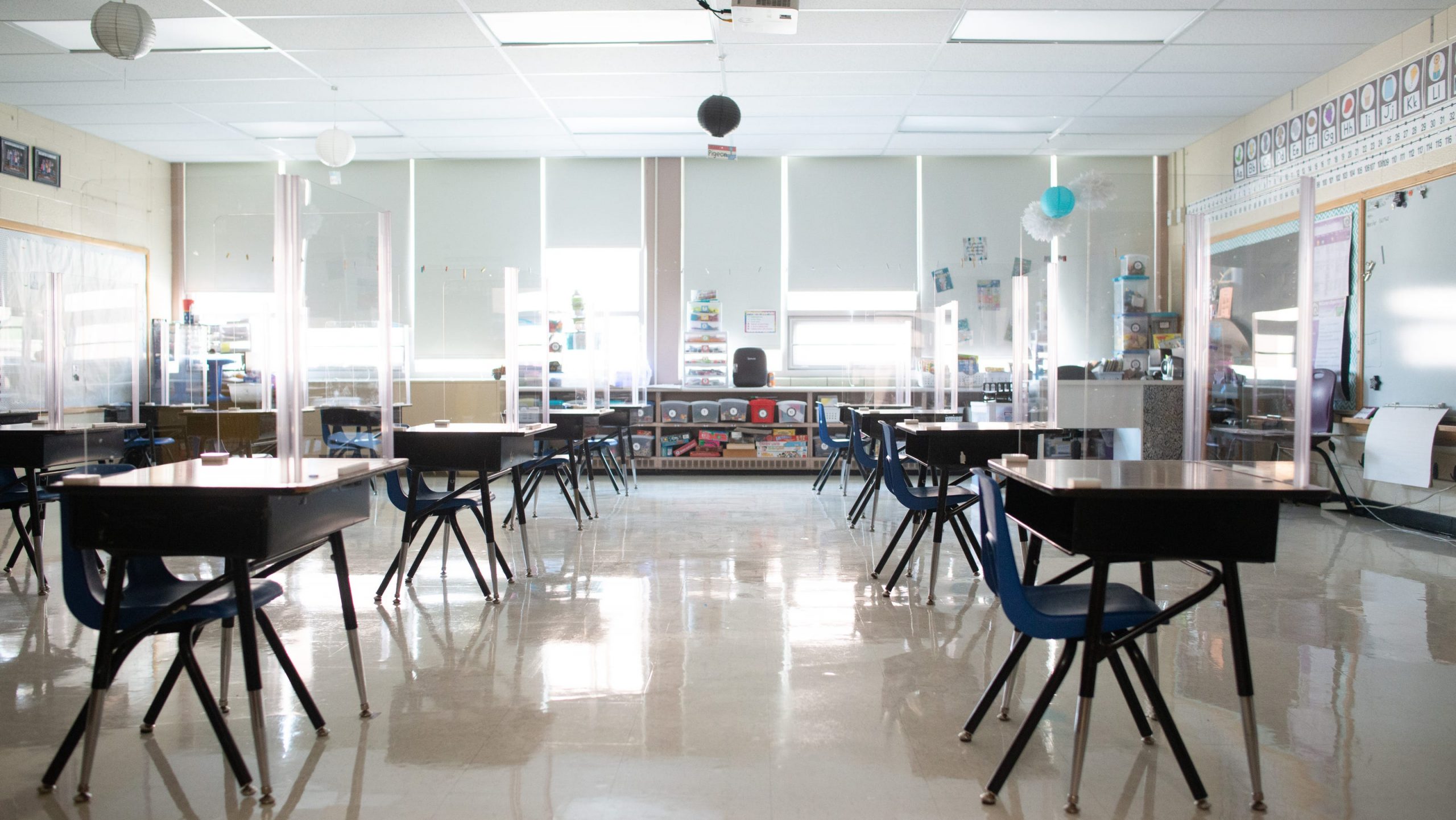 Kansas – Like a lot of other rural Kansas districts, Smoky Valley Unified School District 400 had already been dealing with the pitfalls of declining enrollment when one of the most disruptive years in the history of Kansas education started.

Covering a 395.5-square-mile footprint, the district isn’t actually that big, at least in comparison to other mammoth districts covering swaths of the state. USD 400, centered around the charming little town of Lindsborg halfway between McPherson and Salina, had been steadily losing students since a peak of 1,600 students in fall 2017, mostly as jobs became harder to find, said district business manager Julie Martin.

But then COVID-19 hit, and on Sept. 21, the district’s headcount showed enrollment had plummeted by 186 students, or about one in eight students.

“We see enrollment come and go, but this could have a hurtful effect on our funding,” Martin said. “Hopefully, things will get back to normal, but we don’t know that yet.”

And while Smoky Valley’s percentage decrease was among the biggest in the state, it was in line with huge decreases in enrollment rarely seen by districts across the state.

It was the sharpest year-over-year change in the nearly 30 years for which data is readily available. Over those 30 years, enrollment had rarely changed by more than 1%, typically growing at a rate measurable in the tenths of a percentage, before this year’s steep drop of 3.01%.

Craig Neuenswander, deputy education commissioner, said he can’t recall a time when enrollment decreased by that much across the state, although that doesn’t preclude the fact that a change like it could have happened before his time as an educator.

“You might see individual districts where that happens, and that would typically be smaller districts, where a few students can make a huge percentage difference, but across the state, I don’t remember this big a change,” he said.

The numbers reflect enrollment as schools captured it on Sept. 20, the date on which schools are legally required to conduct and report their headcounts (or Sept. 21 this school year, since Sept. 20 was a Sunday). The Kansas State Department of Education allows adjustments to those headcounts for students who would have normally been in school but were absent for reasons such as sickness.

Neuenswander told The Capital-Journal that given the unique circumstances in which schools opened this year, there is a possibility counts could be slightly off, too. KSDE audits some school enrollment reports each year for accuracy, and the counts on KSDE’s online data tool reflect unaudited Sept. 20 headcounts, he said.

“We’re always off a little bit (with the Sept. 20 data), but with the amount of change this year, yeah, it could be off more than usual,” he said. “I wouldn’t expect it to be a huge amount, though.”

He said that at the local level, enrollment drops can seem more significant when there are differences between class sizes.

“Part of the enrollment loss, and this would be a small part of it, is that students might not necessarily have gone anywhere,” he said. “If you have 100 seniors who graduate but you only have 90 kindergarten students enroll the next year, you’ve lost 10 kids even though nobody moved.

“Some of it from year-to-year, in a normal year, is attributable to that, but obviously, the pandemic this year had quite a bit more to do with that.”

The state’s 2020-2021 kindergarten class was indeed the most affected by the enrollment drop, and in Kansas’ public schools, 3,000 fewer kindergarten-aged students enrolled in classes, representing an 8.6% drop from the previous year’s class of 35,500 students.

Lower-income students appear to have been the most affected of that group, with more than 2,500 fewer kindergartners who would have qualified for free or reduced lunch entering school this year compared to 17,000 such students in 2019-2020.

In Kansas, students aren’t required to attend kindergarten, although state data shows that the vast majority of families do choose to send their children to kindergarten once they become eligible at 5 years old, and those families are required to keep their students in attendance once they do enroll.

Kansas Department of Health and Environment birth data does show a gradual decline in the state’s birth rate since a peak of 42,000 births in 2007, pointing to shrinking classes of incoming kindergarten students.

One major change not necessarily reflected in the state’s cumulative enrollment data is a spike in the number of students attending virtual schools, which can either be full-fledged schools in a district or included as general district programs for data reporting purposes. Those schools, while under the umbrellas of their districts, may serve students from anywhere in Kansas.

Virtual schools, offered to students mostly via internet courses, saw a surge in popularity this year, increasing by 5,300 students, or 47.9%, between fall 2019 and fall 2020. One virtual school, Elkhart USD 218’s Kansas Connections Academy in southwest Kansas, more than doubled from a 793 virtual student headcount in fall 2019 to 1,970 in fall 2020.

Still, virtual school enrollment is included in the statewide headcount data and doesn’t account for any part of the 15,700 student drop in fall 2020, although that shift could have future implications on district finances, since virtual schools are funded differently than their brick-and-mortar counterparts.

It is difficult for Jennifer LaPorte to quantify it, but there has been a definite increase in interest in homeschooling in Kansas.

LaPorte, a homeschooling parent, is also chair of the Christian Home Educators Confederation of Kansas, a loose coalition of various other smaller groups of homeschooling families across Kansas. The group helps facilitate some statewide conversations on homeschooling issues, as well as helping to direct interested families to more local groups and homeschooling resources.

“Homeschooling parents are interested in providing an educational environment that best meets the learning needs of their individual students,” LaPorte said. “That’s what attracts people to homeschooling.”

By definition, the state department of education’s data doesn’t include students who don’t attend schools accredited through the agency, and there is no clear estimate on how many Kansas children are homeschooled, either before or during the pandemic.

While Kansas law requires that all educational entities — including private schools and homeschooling families — register through the department, only public schools, which must be accredited, and private schools that seek accreditation are required to report enrollment numbers.

Since homeschooling families are only required to register once and they don’t have to report the number of students in each homeschooling group, no conclusive data exists on Kansas’ homeschool student population.

She said that while homeschooling requires a lot of parent involvement and effort, it doesn’t take a particular type of person to do it, and Kansas homeschoolers come from every type of family and income level.

Especially with remote learning, when parents have had to step in and become more involved with their children’s schooling, homeschooling families were perhaps well suited to tackle the challenges of learning during the pandemic, having already had experience in teaching their children.

“A remote learning environment can be challenging if the student is struggling,” she said. “A teacher can make their best effort to assist them, but that distance is difficult to bridge, I think, whereas a homeschool parent who is there with their student, they have an opportunity to adapt and meet their students’ needs.”

Beyond homeschooling, there’s also the possibility that some Kansas students simply didn’t attend any kind of school this year, at least during the official Sept. 20 count date. That, however, would be an even more difficult number to estimate than the number of homeschooled students.

“There very well may be students like this, but we don’t have that information,” said Denise Kahler, KSDE spokesperson. “KSDE only has data on those that are required to submit to us through accreditation. It is the responsibility of the local district to report to their county attorney any child that they suspect is of the age to attend school, but isn’t attending.”

What happens in the long term?

The bulk of Kansas’ schools funding comes from their enrollment, with the state sending out equal amounts per student called base aid per pupil. Districts are allowed to adjust or weight their enrollment figures for certain factors like the number of at-risk students or transportation needs.

To protect against sudden swings in enrollment from community changes like a deployed brigade, a shut-down factory or even a pandemic, local districts are allowed to use the higher enrollment number from the preceding two school years in setting and adopting their budgets. That practice also helps legislators plan state budgeting for school years before they happen, although some district funding, like at-risk and technical education funding, is calculated using current year enrollment figures.

For that reason, any enrollment changes this school year couldn’t factor into local district’s general funding until the 2021-2022 school year.

But that is also the reason state leaders and local administrators are keeping a close eye on future enrollment, particularly in this fall’s Sept. 20 headcount date. Even beyond this school year’s dip in enrollment because of COVID-19, the state faces an increasingly smaller pool of incoming kindergartners, with Kansas’ birth rate having dwindled 15.3% to 35,400 in 2019 since a 2007 peak of 42,000.

“It could definitely continue past this year, if parents chose a particular alternative education path and they happened to like it or if they continue to be concerned with coming back to in-person schooling or whatever the situation might be,” said Neuenswander, the deputy education commissioner.

At Smoky Valley USD 400, district business manager Martin said she hopes enrollment will eventually start coming back, especially as the community continues to work on programs and facilities to entice people to return to the Lindsborg area.

“But if we have several years in a row like this, we would have no option but to use these low enrollment numbers, and that’s a huge decrease to our budget,” she said. “Even though we need to still provide all these teachers. We have good sizes in our classrooms, not too large, and a lot of different services we provide, and it would hurt to have to cut them.

“Hopefully, thing get back to normal. But we don’t know that yet.”