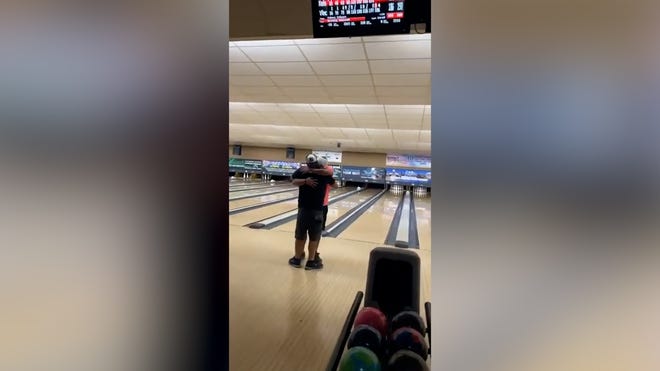 And given the wet, rainy conditions, it was a nice shot of momentum going into next week’s State Outdoors in Wichita.

Going head-to-head with Lansing’s Malik Benson in the 100 and 200, the UKC rivals split their showdowns. Smith won the 100 title by a mere .07 seconds, taking the early lead on Benson and staying a step ahead of him the entire way to win in 10.90.

Smith finished his day with two golds, winning the 110 hurdles by nearly a half second in 14.92. Heights’ 400 relay team fell short of qualifying for state.

Heights boys also got a victory from Aidan Hicks in the javelin with his top throw of 180 feet, 8 inches more than 20 feet ahead of the field. Teammate Brian Hahn also qualified for state in the event, taking fourth (150-4).

Like Smith, Shelby Butterfield missed the city meet, and the month leading up to it, with an injury before returning on a limited basis at league. She was in full force at regionals, however, and came away with state berths in three events.

Taylor Rottinghaus claimed the lone win for the T-Bird girls, edging Leavenworth’s Dhakiya Blake by .05 seconds for the title in the 400, winning in 57.64 seconds. She also finished fourth in the 200 (26.36) and also was on the 1,600 relay along with Buttefield, Molly Busenitz and Haley Haltom.

• Seaman’s Bethany Druse continued her undefeated season in the 800, winning a tight battle with Mill Valley’s Molly Ricker. Druse crossed in 2 minutes, 23.02 seconds, just .37 ahead of Ricker. She earlier had won the 1,600 title by four-plus seconds in 5:24.17.

Cadin Worcester added the only other victory for Seaman at the regional, going a personal-best 6 feet, 4 inches to win the boys high jump. He also teamed with Cade Rothenberger, Trey Ramirez and Adonis VanLeeuwen for a third in the 400 relay (43.67)

Led by two wins from freshman Victoria Reed, the Topeka West girls finished third at the Class 5A regional at Valley Center.

Reed was denied a third title by Brooks, who edged her by .05 seconds for the win in the 200 with Brooks winning in 26.43 seconds. The duo also teamed with Adina Davis and Malayah Henderson for the win in the 400 relay in 50.41 seconds.

Davis added a runner-up finish in the long jump, taking second by two inches to Hays’ Reanna Green with a jump of 17 feet, 2.5 inches. She also qualified in the triple jump with a third-place finish (34-9), while MaKinsey Jones was fourth in both the triple jump (34-3) and high jump (5-0) to earn state berths in both.

Mikayla Wilkerson was a regional champion for the Chargers in the discus, throwing 119 feet, 1 inch for the title.

Richardson didn’t miss out on a title in the triple jump, winning the event by two and a half feet with his top jump of 45 feet, 5 inches. The Scot sophomore nearly added a third state berth in the long jump, but missed out by 0.75 inches in taking fifth at 21-05.5.