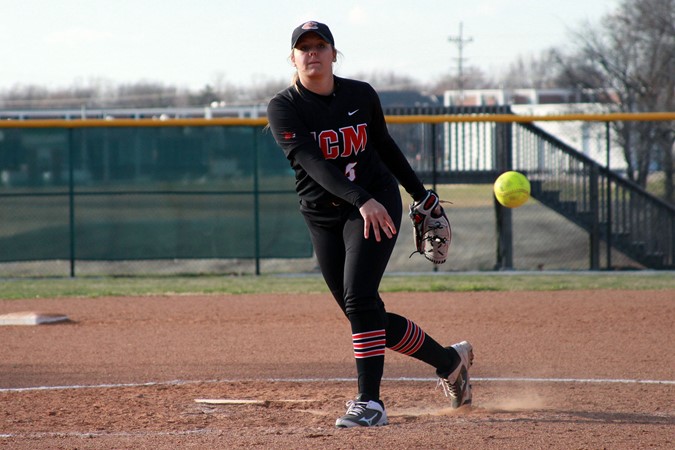 The Huskies got off to a resounding start in their first game of the day, as they kicked off leap day with an 8-0 win over Emporia State. After a cold Saturday, St. Cloud State’s offense kicked things off with a vengeance, as the team opened the game with a three-run first inning to take an early 3-0 lead. Jasmin Estrada (Litchfield, Minn. / Litchfield) provided the highlight of the inning, as her two-run blast helped give the Huskies their early lead, as did an RBI double by Megan Conrads (Lakeville, Minn. / Lakeville South)

The Hornets managed to keep St. Cloud State at bay in the bottom of the second, but nothing could stop the Huskies in the third, as they scored four runs on three hits and two Emporia State errors, extending their lead to 7-0. Maya Keating (Wheaton, Ill. / Wheaton-Warrensville) opened the inning with a leadoff single, stole second base and reached third on a sacrifice bunt by Sydney Trees (Prior Lake, Minn. / Prior Lake). She was then brought home on another hit by Conrads, this time a bunt single, to make St. Cloud State’s lead 4-0.

Conrads, Estrada and Brooke Bowlin (Chaska, Minn. / Holy Family) would score the Huskies next three runs, as an error by the pitcher and a single by Bowlin extended the lead to 7-0. St. Cloud State was denied its eighth run until the bottom of the sixth, but the way the Huskies scored it was in wild fashion. Bowlin drew a leadoff walk to start the inning, then, as per usual, stole second with ease to put a runner in scoring position for Cassie Francesconi (Schomberg, Ontario / Emily Carr Secondary). The senior didn’t even need to record a hit, though, to score the speedy Bowlin, as she advance to third on a wild pitch and scored the eighth and final run of the ball game on an error by the pitcher, securing St. Cloud State’s 8-0 victory in the sixth inning.

The Huskies were looking for a Saturday sweep as they faced Central Missouri in their second game of the day. As it had on Friday, St. Cloud State found itself in an early hole, as the Jennies scored a single run in the top of the first inning for an early 1-0 lead. The Huskies quickly overcame the one run deficit, as Estrada and Bowlin scored two unearned runs to give their team a 2-1 advantage after two.

Central Missouri quickly tied the game in the top of the third, as a lead off single and two stolen bases allowed the Jennies to even things up at 2-2. St. Cloud State had the perfect answer, as Conrads scored on an Estrada double to regain a 3-2 advantage for the Huskies.

St. Cloud State added to its lead in the bottom of the fifth, as Alexandra Pinkowski (Prior Lake, Minn. / Prior Lake) opened the inning with a lead off single and scored on a sacrifice fly by Keating, boosting the Huskies lead to 4-2.

That two-run advantage was seemingly enough for St. Cloud State, as the team made it through the sixth inning unscathed and needed just three outs to secure its second victory of the weekend. That was sadly not in the cards for the Huskies, as the Jennies scored four runs in the inning, winning the game by a final score of 6-4.

Estrada was the top hitter for St. Cloud State in game two, as she went 2-3 with one run and one RBI for the Huskies, while five other players recorded one hit in the loss.

With the split, St. Cloud State’s overall record improves to 6-3. The Huskies will look to close the weekend on a high note, as they take on Fort Hays Sunday at 9 a.m. in Topeka, Kansas.

Washburn’s Hinton ready to prove himself in the NFL