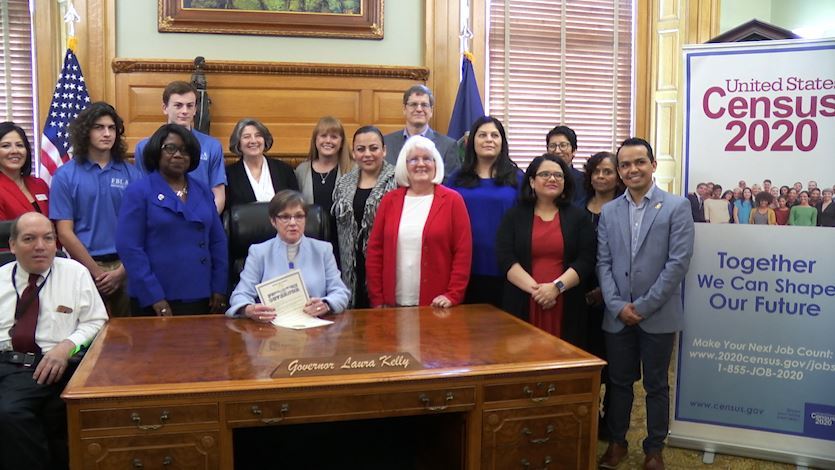 TOPEKA, Kan. – The census is April 1st, and soon everyone in the country will be getting the same letter in their mail box.

In two weeks, people will begin receiving a letter that will ask how you want to fill out your census form.

“They want everyone to respond either online or by phone, which is different than any other census that has occurred, so we’ve really worked on a lot of messaging to let people know things are a little bit different this year,” said Wendi Stark, a census outreach manager for the League of Kansas Municipalities.

On Friday, Governor Laura Kelly signed a proclamation saying how important it is to have every person counted in Kansas.

The state’s Complete Count Committee has been working since last year to get the word out about the event that occurs just once a decade. The committee said work will continue into the summer.

If someone doesn’t respond to the letter, or follow up letters, which is required by law, census workers will go door to door to get your information.

Officials said they are spreading the word trying to make sure hard-to-count populations like young children, renters, and the elderly are properly counted.

“I think we’re going to look very closely at the early response rates, and then try and address the geographies and demographics of folks that aren’t participating yet,” said committee co-chair, Brian McClendon. “I foresee challenges, I’m at the University of Kansas, and I think college students need to be made more aware of it, and we need to make sure they all get counted,” he said.

The census is used to determine how congressional and legislative districts will be shaped. Federal tax dollars are also allocated by population size.

Organizers said if just one percent of the state’s population isn’t counted, it could cost Kansas 600 dollars in federal tax money over the next 10 years.