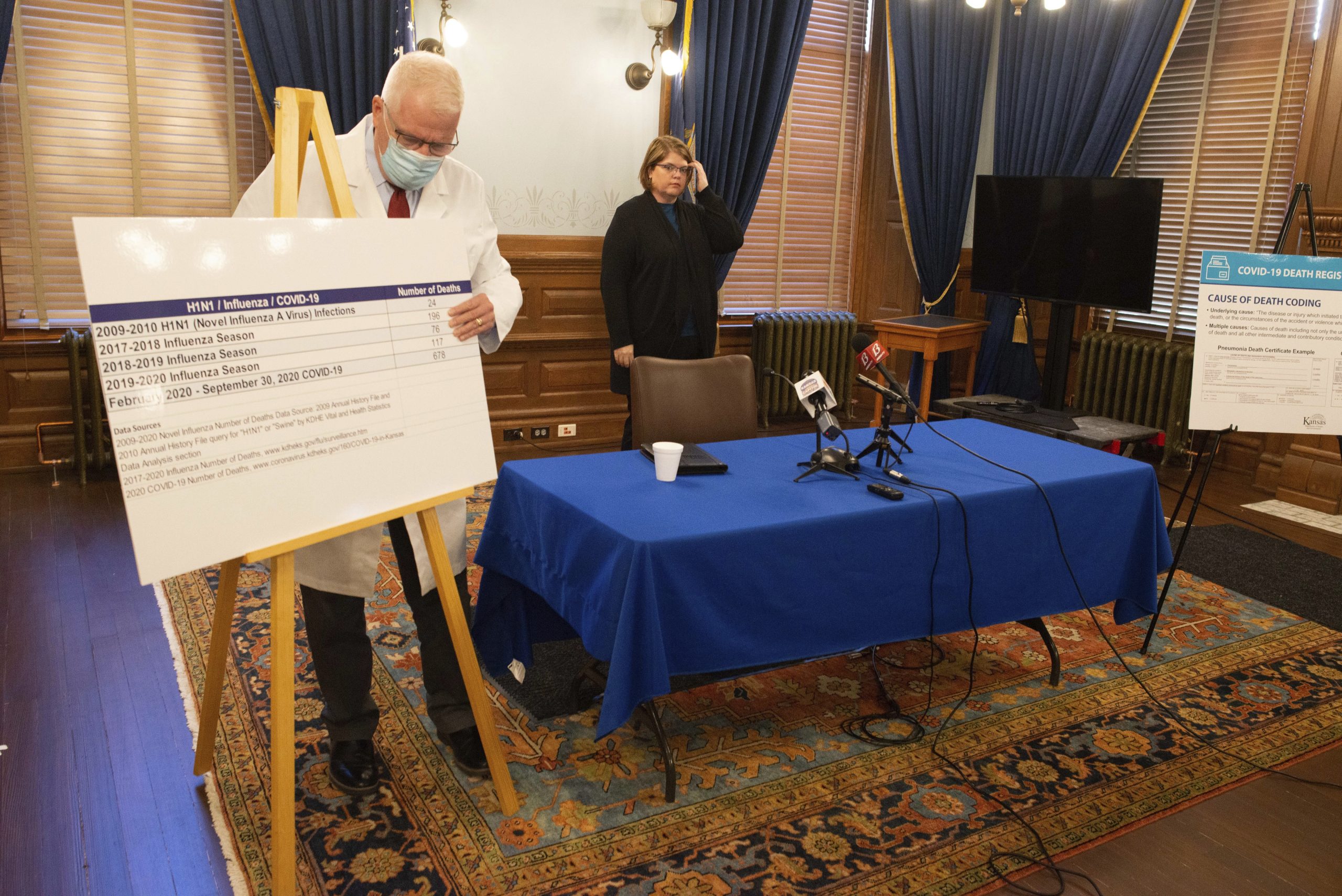 TOPEKA, Kan.— The top public health official in Kansas said Wednesday that the state has yet to see its biggest wave of coronavirus cases, suggesting the pandemic could spawn an average of 800 or even 900 new cases a day in coming months.

While the state’s most populous counties have continued to generate hundreds of new cases every week, rural areas also have been seeing spikes. And health department data released Wednesday showed that outbreaks have returned to the state’s prison system.

The health department said Kansas saw 1,120 new confirmed and probable cases since Monday, an increase of 1.9%, bringing the total to 59,729. Norman said he thinks the state will see cases level off at the current daily increases, then “take off” for a “second wave.”

Norman said the likelihood of larger numbers demonstrates the need for continued “vigilance” in wearing masks and social distancing. He said efforts in March and April that included a statewide stay-at-home order and the closing of K-12 schools, cut down on the numbers of new cases but, “we would prefer not to go down that road again.”

“We have a long ways to go,” Norman said during a Statehouse news conference. “That really brings up, focuses on, why we need a vaccine.”

The number of coronavirus cases is thought to be higher because people can be infected without feeling ill and because of limited testing early in the pandemic. Norman said he believes Kansas is “close” to having its actual number of cases represent 3% to 5% of its population — from 87,000 to 145,000 cases.

For most people, the new coronavirus causes mild or moderate symptoms, such as fever and cough that clear up in two to three weeks. For some, especially older adults and people with existing health problems, it can cause more severe illness and death.

In Kansas, COVID-19-related deaths continue to represent about 1.1% of the number of reported cases.

The state health department reported 41 new COVID-19-related deaths since Monday, bringing the total to 678. However, the department said 21 of those occurred earlier this year and were reported after officials examined death certificates.

The health department also reported that there are active clusters of five or more cases in four prisons and an inmate work-release program in Wichita. They account for 244 cases within the past 14 days.

The health department said the prison in Hutchinson has had 85 active cases in the past two weeks and the state’s prison mental health center in Larned has had 79.

The state saw a massive outbreak at its prison in Lansing earlier this year, with more than 900 cases, though corrections officials declared it contained as of early June.

The department said last week that it had 308 active cases among inmates and 12 among staff, and Bowman said the figures will be updated later this week.

Hayden’s Newkirk has sights set on 4A cross country crown