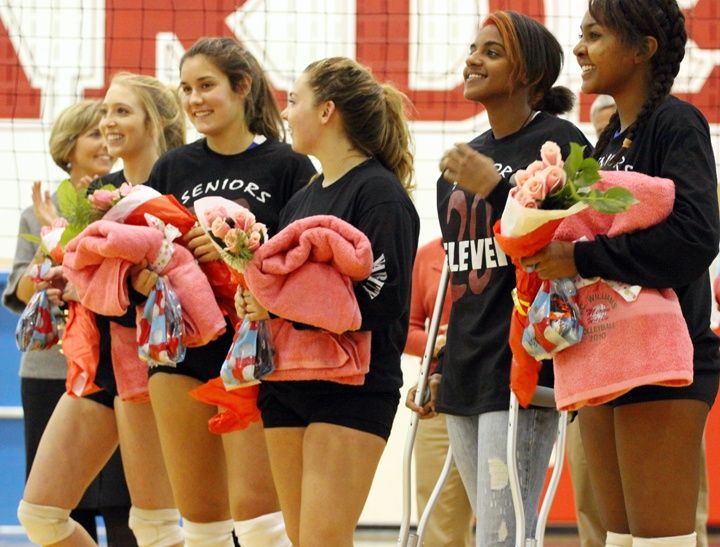 “We had plans to do an alternative attendance,” Athletic Director of MHS Mike Marsh said. “But we had not made a decision on that prior to Friday.”

Parents of senior players wanted to know if the girls could have students come to support them, as it was unsure at the time if they would be allowed. Because of this, the players wrote to Marsh asking him to allow fans.

Before the game Monday Marsh made the decision to allow students to attend but in a limited capacity. Each senior player was allowed three tickets for students. The volleyball team has nine seniors, so in total 27 students were allowed into the game.

The senior girls appreciated having their senior peers in the crowd, as they usually would every other year.

“It’s kind of weird because we usually can have students,” senior Bonnie Hegarty said. “We were thankful for the people that were able to come since it was our senior night. It gave us momentum, it gave us motivation, since our friends were there and it’s the only time they can come and watch us. It was awesome.”

Not only were the students allowed to come, but they made an impact on the team. The Indians went on to defeat both Topeka High and Topeka West on the night.

“It was good to have our friends there and see all of the hard work we put in the past four years and celebrate the night with us,” senior Ellie Hacker said. “We play better when we have a crowd to cheer us on, and it’s awesome playing with our friends and for our other seniors in the crowd.”

Tae Thomas blazes her own path