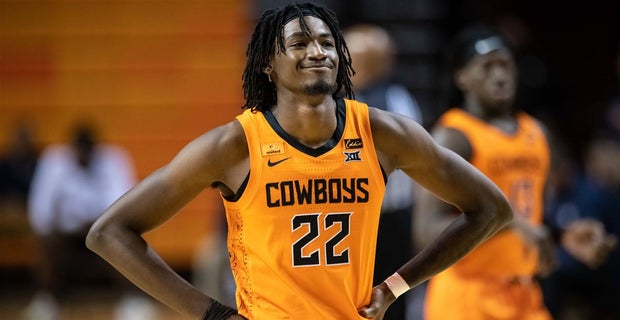 Kansas – The Cowboys learned the hard way that Big 12 opponents are not going to go away easily — ever. Oklahoma State (7-3, 1-3 Big 12) let a second half lead slip away in each of its first four conference games this season, including Monday’s 87-84 loss to West Virginia, in which the Pokes lead by 19 points with 11 minutes remaining. The inability to close out games late also led to losses against unranked TCU at Gallagher-Iba Arena and No. 11 Texas on the road. Oklahoma State was lucky to navigate an overtime win against No. 13 Texas Tech last Saturday despite letting the Red Raiders rally and take a lead in the closing minutes of regulation.

The young Oklahoma State squad has another opportunity to get back on track when it travels to face Kansas State (5-7, 1-3 Big 12) Saturday at 5 p.m. CT in Manhattan. The game will air on ESPN2 with Rich Hollenberg and Chris Spatola on the call. Cowboys’ head coach Mike Boynton, as well as sophomore forward Kalib Boone and freshman guard Rondel Walker all took some time Thursday after practice to answer questions from reporters via Zoom and provide and update on the Cowboys ahead of this weekend’s trip to Manhattan. Here are some highlights from what the Pokes said during the media availability.

“It’s a young, Bruce Weber team, who always seems to get better as the season goes along. I wasn’t in the league yet, but I remember watching Dean Wade, Barry Brown and Kamau Stokes as freshman and watching them go through the process of learning how to compete and win in the Big 12. I think all the people in Manhattan would say it wasn’t pretty, but they stuck with the process, they believed in what they were doing and they became Big 12 Champions, and went to the Elite Eight one time. They’ve got a little big of carry over from the team. I think Mike McGuirl is the only one left, I think, but that’s kind of who they are again.

“That’s college basketball in many ways right? If you’re going to do it the right way and you’re going to not cut corners, you’ve got to get a bunch of young guys, you’ve got to teach them how to play. You’ve got to learn through some bumpy roads, and eventually is they stick together long enough they can find success. I think this team is getting better. They’re much better today than they were a month ago. I expect them to be better a month from now than they are today. It’s a credit to his staff and the guys commitment to their team. We’ll have a challenge. It’s not like we’ve got a bunch of old guys running around here either. They’ll be tough to compete with. Davion Bradford, who we recruited for awhile, he’s a load in there and he’s getting more comfortable as the games go along. They’ve got some really, really athletic players and guys who can really shoot it.”

On helping forward Kalib Boone with struggles on the court:

“Be brutally honest with him as well. The only way you can do that is if you’ve got real relationships. Because at the end of every conversation, no matter how hard or easy it is, I tell those kids I love them, because I do. It’s not personal, it’s just that I want better for him. And if he’s better than our team’s better. It’s really simple. He works hard, but he’s not doing enough at the level he’s capable of to help our team. If we’re gonna have the success that we think we can then he’s going to have to step up. It’s really that simple. He’s capable of it. He’s shown flashes. He just hasn’t put it together consistently. The beauty of it on one hand is there’s still some time. The hard part is there’s no guarantees this year. We’ve got our fingers crossed that we can continue to play and stay away from any issues, but this is one of those things you’ve got to know. You can’t take it for granted. There’s no guarantees. Every time you go out there and you waste  an opportunity, it’s one that you may not get back. That’s been the message to him. Let’s do it now. Let’s not wait and say woulda, coulda, shoulda. Because again there’s no guarantees.”

On what stood out on film from West Virginia loss:

“We went back to the film. I’ve probably watched the game six times. We just relaxed as a group and that’s on me to make sure that they don’t. We’ve got to continue to send a message that as long as there’s time on the clock you better be playing to win. The moment you relax — it’s not like the guy on the other sideline hasn’t been down before and hasn’t had a way to figure out how to come back — they’re going to continue to compete at this level. There was more at stake, they had already lost one of their games. You go on a road swing like that, you want to win both, but you lose the first one and it’s like, ‘We’ve got to get this split.’ That’s the mentality that West Virginia had, so they continued to play. Again, it’s on me to get that message across to those guys and to let them understand when that momentum starts to shift, you’ve got to do something about it. We had four straight turnovers and missed a layup to start that segment and we never got it back. All the sudden West Virginia starts to feel more and more confident that they can get it done. Then all you need is a couple things to not go your way. Maybe a missed call or a missed shot you usually make, or you don’t get a defensive rebound and there you go. Just the mentality of keep playing with your foot on the gas is what we’ve been preaching.

“In fact, the last two days of practice, we practiced with a score board with only time on it. No score. We didn’t talk about the score until it was over. What my message was, it doesn’t matter. Don’t scoreboard watch. If there’s time on the clock, you do your best on both ends to execute the game plan. You execute, you screen, you run, you talk, you block out, you rebound. If you keep doing that, then the 19-point lead doesn’t disappear.”

On philosophy of stopping scoring runs by opponent:

“It’s game-by-game. Some of it just depends on how the run is happening, right? The run here that TCU went on on us, the 9-0 to end the game, we literally got the ball within two feet of the basket three-straight possessions. So I don’t feel like we weren’t running good stuff or not getting the ball where we wanted to go. We just couldn’t finish the play. And they scored as well. The other night it was just a mental thing. It was more that we weren’t focused on playing to win. We played aggressive basketball, we were a pretty damn good team for 29 minutes the other day. I don’t want to get away from our guys remembering who they were for that part of the game as well. Yes, we lost the lead, but we also got it. We had a 19-point lead on the 14th-ranked team in the country at our place. I think if we get a stop and a score at that moment, maybe that’s the knockout blow and we didn’t deliver it.

“Every game is different. They bring up different circumstances, but a lot of times what you want to do is, if you’re struggling or if a team’s on a run, get to the free-throw line. Get something close to the basket, maybe it’s a defensive change to give them a different look and get them off balance if they’re in rhythm against one of your defensive coverages. So I can’t say there’s one blanket deal. I try to be conscious of my timeouts. Every game we’ve played in league has been a one-possession game or overtime, which means to me, you’ve got to be ready to help your team late in the game. I don’t like to call a ton of timeouts early, because I know in this league you’re look at the last four minutes, it’s going to be a 2-3 possession game and you want to be able to help the kids as much as possible in that situation.”